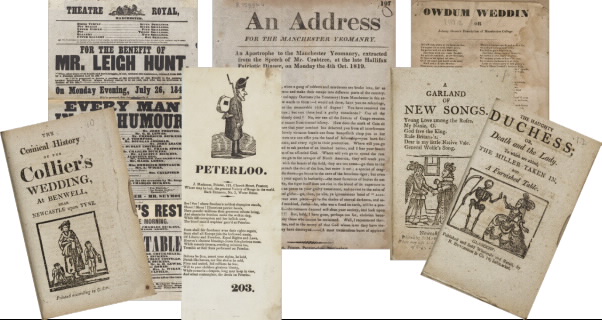 As one of the curators of printed material at The John Rylands Library, I have the privilege of looking after a wide range of rare books on subjects including English literature, history and architecture. Our impressive holdings include first and limited editions, fine printing and private press publications, and contemporary and designer bookbindings. However, some of the hidden gems within our collections have far more humble origins.

Our Street Literature Collection contains a varied range of ephemeral material published for immediate consumption by ordinary people. From public notices, proclamations and advertisements (including playbills) designed to inform, to chapbooks, ballads and song-sheets aimed at entertainment, these cheaply printed single sheets and pamphlets offer a wealth of potential for researchers from across a range of disciplines. 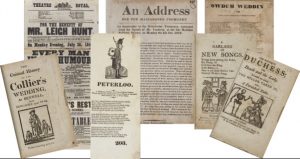 Items from the Street Literature Collection

Street literature, whether pasted onto walls, or sold by itinerant hawkers for as little as a halfpenny, was often mass-produced. However, its ephemeral nature has led to haphazard rates of survival. The preservation of material in libraries today is often the direct result of the foresight of individual collectors. Examples in The John Rylands Library include two volumes of early nineteenth-century Manchester playbills collected by James Watson (1775-1820), the author of a theatrical review, and a fascinating scrapbook entitled ‘Ballads, Garlands and other Metrical compositions’, compiled originally by the Bateman family of Derbyshire, and belonging later to the folksong collector Sabine Baring-Gould (1834-1924). 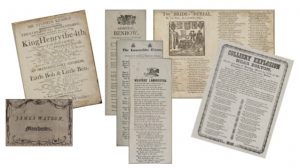 Another collector, who actively accumulated material that might otherwise have been lost, was Narcissus Luttrell (1657-1732), a London historian and diarist. Best-known for his collection of ephemeral material relating to the Popish Plot, Luttrell was one of the most prolific collectors of ‘cheap print’ in England during the late 17th and early 18th century. Although Luttrell wished for his Library to be preserved intact, his descendants dispersed the collection over time, and today remnants can be found in several British and American libraries. In The John Rylands Library, a bound volume of the Accounts of the Ordinary of Newgate bears evidence of Luttrell’s ownership. Arranged in chronological order, dating from 1689 to 1730, the publications range from single sheets to an eight-page pamphlet. More than three-quarters of the 253 items are annotated in Luttrell’s distinctive handwriting, giving details of the price paid and the date of publication.[1] 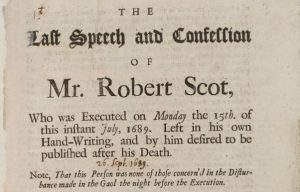 The Ordinary of Newgate was the chaplain at Newgate prison, who administered to the spiritual needs of prisoners who were condemned to be executed at Tyburn. Among the benefits of the post, was the right to publish the last words and life stories of the prisoners. Typically, these Accounts provided a summary of the Ordinary’s interaction with the malefactors, including conversations, Bible readings, sermons and prayers, followed by details of the individuals’ lives and crimes. The biographies acted as a deterrent to would-be offenders, while confessions, or ‘last dying speeches’, added legitimacy to the court’s verdict and sentence. Though marketed as a religious and moral publication, the Accounts were a profitable sideline for the Ordinary. Luttrell’s annotations show that prices ranged from 1d to 2½d. However, high sales were encouraged by the rapid production and immediacy of the Accounts, the majority of which were available within a day of the execution(s).

Researchers today benefit increasingly from online catalogues and digitised resources. However, with large ephemeral collections, items sometimes remain hidden. In the Luttrell volume, for example, around one-third of the items are currently uncatalogued, although the Library is seeking to rectify this. Likewise, the volume includes a number of Accounts that are not found on the Old Bailey Online website, and several items that are not recorded in the English Short Title Catalogue (ESTC).

Crimes detailed in these rare survivals include murder; robbery; arson, and wife-beating. There are examples of High Treason, including counterfeiting and activity relating to the Jacobite rising of 1715, plus a copy of the last dying words of three members of the Waltham Blacks. These Hampshire poachers, who blacked their faces before stealing deer, were early casualties of England’s Bloody Code. There are also several items relating to piracy and robbery and/or murder ‘on the High Seas’. These include a list of twenty-four pirates executed in November 1700, and details of the famous English pirate, Captain James Kelly, a longtime associate of Captain William Kidd. Kelly’s body was ‘hang’d in chaines’ following his execution in July 1700. 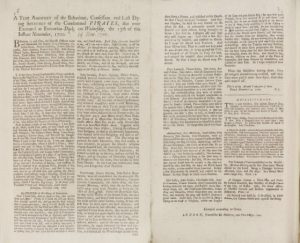 ‘Piracy and Robbery on the High Seas’

While interest in Street Literature and playbills has increased in recent years, the sheer volume of material held by some libraries has prevented full and detailed information from being available online. However, further details are often accessible in hard copy hand lists, analogue card catalogues, or via the curator’s personal knowledge of the collections. Researchers who wish to explore ephemeral material may need to dig a little deeper. Making contact with Special Collections could lead to the unearthing of another hidden gem.

Treasures in plain sight: revealing the depths of the Methodist Collections at the University of Man...
Ancient Letter Collections Project (and how you can help!)
Geographical visions of Tokugawa Japan (1603-1868) in the John Rylands Library