Dr Rebecca Whiteley is the Shreeve Fellow in the History of Medicine, John Rylands Research Institute, University of Manchester. Her research focuses on the visual and material culture of pregnancy and midwifery in the nineteenth century. She is currently researching obstetrical and medical flap books and paper models, and an archive of paintings and prints used to teach midwives in Manchester in the nineteenth century. 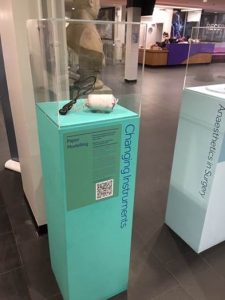 Facsimile head model and historic forceps on display in the Stopford Building. 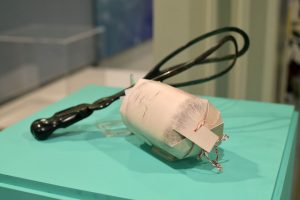 Close up of paper head model

In early nineteenth century Britain, increasing numbers of surgeons and physicians began to attend women in labour as part of their practice. One of the advantages they supposedly had over women midwives was the ability to use forceps to deliver obstructed foetuses. However, actual levels of skill and experience with the tool varied enormously, and gaining access to labours was a particular problem for medical students. How then, did medical students and young practitioners at this time learn to use their forceps?

In 1813 James Hogben, a well-established surgeon and obstetrician, published a midwifery manual and an accompanying atlas of plates. The book, Obstetric Studies, was a conventional manual for students. The atlas, however, was remarkable for being very large, highly coloured, and containing a complex flap-anatomy that described the anatomy and physiology of the pregnant and labouring body at more or less life size. 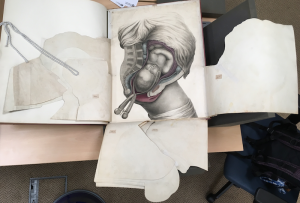 The final plate in the Anatomical Tablesis a single print that was meant to be cut out of the book and turned into a three-dimensional model of the fetal head. By cutting tabs into the top and bottom of the print and threading string through them, the print could be rolled and the tabs drawn together, to form a rough ovoid shape. Ears made of leather were stuck onto the surface of the print, and a ring of wood or whalebone could be inserted to make the model more rigid. The model could be hidden in a special paper pocket within the large flap anatomy, and then extracted using forceps. 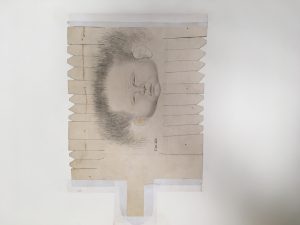 Various paper models, including flap anatomies and articulated dolls, were produced as teaching aids in the nineteenth century. They formed part of a much wider material culture of medical training that included books, images, working models and wet and dry specimens. Because it was difficult for students to get sufficient practice at actual labours, a range of models of the labouring body were produced, including complex mechanics to simulate contractions, liquids to simulate the amniotic fluid, and flexible materials to simulate the perineal muscles. Such models sometimes used cloth dolls to represent the fetus, and sometimes actual fetal cadavers. When I found Hogben’s paper model, retained in the copy of Anatomical Tablesat the library of the Royal College of Physicians London, I wondered how effective it could have been at simulating the actual conditions of birth, and how it compared to the more complex models available to students at the time.

To investigate this question further, I produced a facsimile of the model, following the original cut lines and the holes and staining from the original string. Using contemporary forceps from the Museum of Medicine and Health, University of Manchester, I was able to get a sense of how the model feels in simulating forceps practice. My own clumsiness with the heavy forceps, which need to be inserted one blade and then the other around the head, before being carefully locked together, showed me the difficulty that young and inexperienced practitioners must have faced in seeking sufficient training with the tool.

The thin card, perhaps reinforced with a hoop, does help the forceps-user to think about the force they apply: too little and the head would slip, too much and it might be crushed. But the model is too light, it only roughly approximates the shape of the foetal head, and isn’t attached to a foetal body! So perhaps it wasn’t intended to replicate the materialexperience of forceps practice. Certainly, more materially accurate models were widely available to students who attended midwifery lecture courses in London. And Hogben’s paper model, published as part of a large and expensive anatomical atlas, cannot be simply explained as a cheaper alternative.

While it is impossible to say for certain what contemporary viewers saw and experienced when they handled the model, it seems likely that they recognised its material dissimilarity from the actual labouring body. Instead, the model may have offered an aid to more fundamental thinking in three-dimensions about the hidden mechanisms of birth. Knowing the position and rotation of the fetal head is crucial to effective forceps practice, and the paper head would have allowed students and practitioners to simulate and think through the different possibilities, as well as how forceps could be applied in each case. 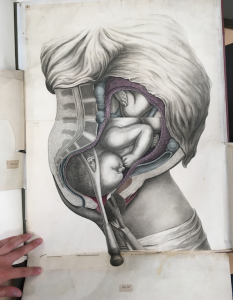 For users of Hogben’s book, therefore, the paper model offered a space for thinking-through and experimentation with the forceps. It may have been somewhat inadequate as a material simulation, but valued as a technical or conceptual one. The model may also have had a social and emotional purpose for practitioners. It is worth noting that many people find handling historic forceps and the paper model disconcerting, creepy or morbid. In the nineteenth-century the model might have provoked similar feelings, particularly because the forceps were notorious in this period as a tool that could equally save a child or kill it, depending on the skills of the practitioner. The model, therefore, may have allowed practitioners to get used to and comfortable with their forceps, and to practice the surgeon’s professional detachment. 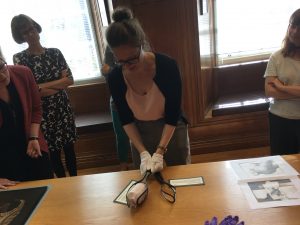 Because the material qualities of this model are crucial to its usefulness, it was important for me as a researcher to create and handle a facsimile. It allowed me to think about how the model might have been understood and used. The facsimile I created, along with the forceps in the Museum of Medicine and Health’s collections, not only provided an opportunity for research, but for wider engagement. At handling sessions, and on display in the Stopford Building (February-July 2020), these objects help us to gain physical and experiential insight into the medical practices, and the medical understanding, of the past.

Berkowitz, Carin, ‘The Beauty of Anatomy: Visual Displays and Surgical Education in Early-Nineteenth-Century London’, Bulletin of the History of Medicine,85:2 (2011), 248-278.

The Artist of the Future Age: What was Blake’s influence in counterculture?
Ancient Letter Collections Project (and how you can help!)
Geographical visions of Tokugawa Japan (1603-1868) in the John Rylands Library