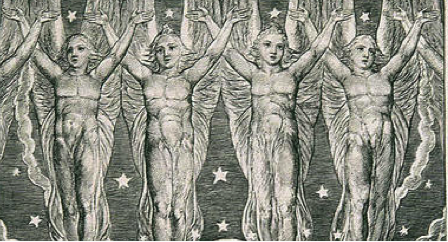 The Artist of the Future Age: What was Blake’s influence in counterculture?

‘The Artist of the Future Age: William Blake, Neo-Romanticism, Counterculture and Now’ was funded by a John Rylands Research Institute events grant and held in the John Rylands Library on 11 October 2019. In this post, student intern Francesca Bradley reflects on some of the conversations which took place as part of the event.

The Artist of the Future Age: William Blake, Neo-Romanticism, Counterculture and Now Conference, held at the John Ryland’s Library on 11th October, saw a diverse selection of speakers discuss Blake as a revolutionary rebel figure within counterculture. 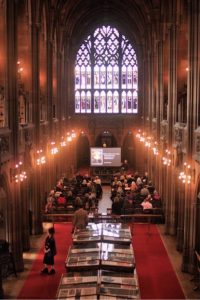 Speakers and audience at The Artist of the Future Age event, 11 October 2019. Image (C) Marnie Parker

After all the talks had concluded, a conversation occurred between the iconic poet Michael Horovitz, and Bryan Briggs, the artistic director of Bluecoat in Liverpool, chaired by Doug Field and Mike Sanders, senior lecturers at the University of Manchester. The day had referenced artists and writers with varying links to Blake, such as Ludwig Meidner, Iain Sinclair, Eric Raviluous and, most significantly, Allen Ginsburg. However, no speaker had discussed the influence on Blake for counter-culture female writers. And, there was an obvious reason why: with the exception of Patti Smith, the “punk-poet laureate”, women did not appear to be inspired by Blake in the same way as their male counterparts. As such, Mike Saunders brought up the pertinent question: why did Blake fail to inspire women? Unfortunately, no clear answer emerged. Though how could it? It’s a question for an essay, not to be answered on the spot. Michael Horowitz responded by highlighting that Blake’s marriage was “ideal”, noting that it was incredibly tender. However, this does not shed light on the issue: only that the engagement was not because he was a misogynist (a problematic conclusion in itself).

So, on greater reflection, why was this the case? It could be argued that some of Blake’s work was representing a gendered spirituality that was difficult for women to engage with. But as the curator Anne Anderton and researcher Naomi Billingsley; the speakers Miriam Dafydd and Sibylle Erle; the exclusively-female interns, and the many women in the audience demonstrated, Blake has not failed to engage women. Certainly, there is an element of spirituality in his work that appeals to a greater sense of masculine individualism, but it would be reductive to assume that this is not transferable to women. It is, perhaps, a sign that Blake’s counterculture rebel status was more appealing to white men with certain structural privileges, though this is not to discount that Ginsberg was an openly gay man in 1960s America.

It is also important to note that the assumption that Blake was the same rebel figure as portrayed in 20th century counterculture can be contested. While the six speakers before him appeared not to critique Blake’s biography, Martin Myrone showed cynicism over the reality of Blake’s visions and mental health. But as was brought up by a member of the audience: why is this significant? Even if the reality of Blake’s biography is exaugurated and misinterpreted, the effect of the perceived biography and his works remains the same. Blake’s role in counterculture was not only as a multi-disciplinary artist and poet, but as a symbol of rebellion. 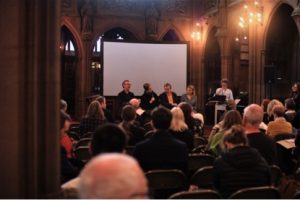 Similarly illuminating was Luke Uglow’s lecture on the critical reviews of Blake as an artist in the UK and Europe. While Blake’s work is often perceived to have been, and to an extent still be, appropriated by (what was once stuffy) academia, Uglow noted the coconscious of connoisseurs was, simply put, that Blake was not a talented artist. This was evidenced by Uglow’s research into art journals from the 1960s. In following Myrone’s talk, it became apparent that the rejection of Blake, or at least Blake the artist, by art institutions allowed him to be fully embraced by counter culture.

Blake’s role in counterculture followed a common thread through many of the talks: he represented a political and spiritual duality. The distinction between the political and the spiritual that appeared unquestioned didn’t sit right with me, however. I was glad, then, when Bryan Biggs questioned the distinction. As he observed, the political and the psychedelic were intertwined. Drawing this distinction, it is easy to attribute different aspects of Blake’s body of work to either being political or psychedelic. However, when viewed from the perceptive of the 1960s, Blake’s status as an icon is clearer when the political and psychedelic are understood to be unable to be separated. In a simplistic explanation of this, Biggs proposed the argument that those engaged in counter culture would trip on drugs, and have their political notions influenced by drugs. While this appears to be a valid and likely conclusion, this is not to reduce either the politics of the beat generation, or William Blake. Instead, it consolidates the links between them. Blake’s visions, whether real or, as suggested by Myrone, constructed, underpin his visual work. The political themes of his work were, and indeed still are, pertinent to the culture. As noted by Michael Horowitz, the artists and writers of the 1960s saw the equivalents of chimney sweeps, the social inequalities of Blake’s era were still present. Blake’s work thus symbolised him as an artist of the future.

In examining Blake through the lens of 20th century counterculture, we can increase our appreciation of the extent to which Blake was revolutionary. In examining the counterculture in the 20th century through the influence of Blake, we can understand the influences that determined the stylistic and political content of the poets and artists. The conference thus demonstrated a series of pertinent observations, while simultaneously raising some thoughtful, provoking questions about Blake’s ongoing influence.

Touching the past: Using letters and printed works to reconstruct literary communities and study the...
Unknown Cranach Work Discovered in the John Rylands Library
Artist in Residence: Rebecca Hurst