The legacy of Mary Wollstonecraft

In continuation of our efforts to study the legacy of women in the development of international law, Işıl Aral has written a short biography on the legacy of Mary Wollstonecraft, a pioneer of women’s rights. 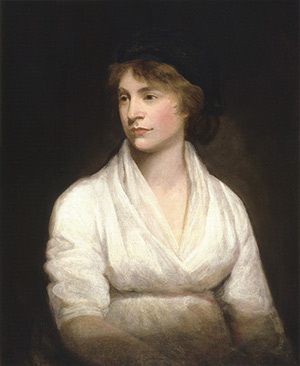 Early life: Born in Spitalfields, London, Mary Wollstonecraft was the second of seven children. She moved several times in her childhood and lived in Epping, Essex, Yorkshire and London. As a child, she opposed gender roles by protecting her mother from her father’s violence, caring for her sister who suffered from post-natal depression, and convincing her to leave her husband.

Career: Due to the scarcity of job alternatives for women in the eighteenth century, she worked in several different jobs as a teacher, governess and needle-worker. In 1786 she wrote her first book Thoughts on the Education of Daughters. Wollstonecraft and her sisters opened a school for girls in 1784 in north London. Two years later she met Joseph Johnson, the official publisher of Rational Dissent, a reformist group. He published Wollstonecraft’s Thoughts on the Education of Daughters, Mary A Fiction and Original Stories. After the writer left her job as the governess to the Kingsboroughs in Ireland, Johnson hired her to write for his Analytical Review. Following her collaboration with Johnson, Wollstonecraft edited Female Writer, publishing it under a male pseudonym, and worked on several translations. The French Revolution had a significant impact on Wollstonecraft: when Edmund Burke challenged the principles put forward by the Revolution in his book Reflections on the Revolution in France, Wollstonecraft replied to him in her book A Vindication of the Rights of Men. The book helped her gain a considerable reputation and in 1792 she published A Vindication of the Rights of Woman, which enhanced her fame not only in the UK but also in the US and France. Besides her own writings, she also made translations from French, German and Italian.

Interests and influences: A political thinker, philosopher and writer, Wollstonecraft has been a pioneer in changing the way women are perceived in the society by tenaciously arguing that ‘mind is of no sex’.  Although the term ‘feminism’ gained its substantive meaning in early twentieth century, an examination of Wollstonecraft’s works will reveal that it would not be anachronistic to consider her one of the first feminist writers.

Contributions to international law: Wollstonecraft is a trailblazer in defending equality between men and women in certain areas, and contributed extensively to women’s rights in her epoch. She challenged Edmund Burke for his critic of the French Revolution in A Vindication of the Rights of Men, where she attacked the old-regime’s despotism, welcomed the French reforms and defended that unless natural rights are protected, one cannot fulfill his obligations. With regards to women’s rights, in her most well known work, A Vindication of the Rights of Woman, she examined natural rights and stated that since these rights are bestowed by God they should be enjoyed by both men and women. She argued that the reason for the mistaken conception that women are inferior to men is the lack of education and that if this defect was remedied it would elevate women’s status in the society. She defended that mentally, there was no difference between men and women and, therefore, women should be entitled to the same fundamental rights as men. This was a very uncommon assertion in the 18th century, when women were considered to be wives and mothers by their nature and not men’s counterparts.  She rejected the fact that women were ‘always to seem to be this and that’ and defended that they should be considered independent citizens, which is only possible by virtue of education. Even though all her ideas did not reflect modern feminist ideals, she challenged her contemporary peers like Burke and Rousseau by carrying the limits of women’s rights beyond her era.