After celebrating the seventieth birthday of the Nuremberg Trials last year, it is time to praise the people who have participated in fighting impunity after the Second World War. With this in mind, WILNET honours Cecelia Goetz, the first woman prosecutor at the Nuremberg Trials. Camille Talbot (University College London) highlights the key parts of her life and her contributions to international law practice. 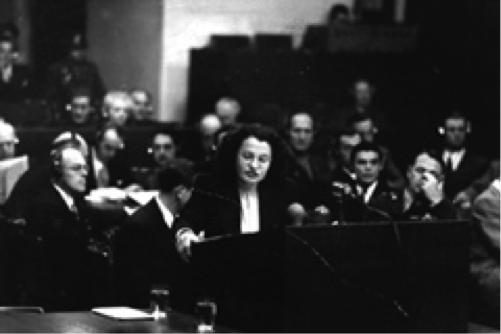 Early Career: Cecelia Goetz’s father was a lawyer. She started her very early career in high school as the editor-in-chief of the student newspaper. She was then admitted at New York University (NYU), excelled academically and graduated as the salutatorian of the class of 1940. Indeed, after a year at the Sorbonne, in Paris, she received a B.A. cum laude and an LL.B. from NYU. During her time at University, she was the editor-in-chief of the Law Review and is said to have been the first ever female editor of a major law review in the US. Moreover, she was the only woman officer of the American Law Students Association.

When she first tried looking for jobs, after graduation, she found that not many were open to women. She could not find work in the private sector, or in the judicial one as a clerk to a judge. The second World War brought her opportunities in Washington D.C. Indeed, because men were being drafted or joined the army, the federal government started recruiting. There, her skills were rapidly noted, and she was hired in the office of ‘lawyers for lawyers’, the Solicitors’ Office of the Justice Department. She then became the first woman ever to be offered a supervising role at the Department, but declined it in order to join the prosecution team at the Nuremberg Trials. Horrified by reports of human rights abuses during World War Two, she wanted to bring perpetrators to justice.

As the War Department did not want women in senior level positions (e.g. as a prosecutor), her application was dismissed. She was also criticised for being too attractive. Brigadier General Telford Taylor, in charge of US prosecutions at the Nuremberg Trials fortunately saw her potential and pushed for her appointment. She was however “required to submit a disability waiver to work because she was a woman” (Amann & Fletcher, 2009).

The Nuremberg Trials: The Nuremberg trials were held in the aftermath of World War II to prosecute “leaders and collaborators of the Nazi regime under the guidelines of international law” (Amann & Fletcher, 2009).

From 1946 to 1948, she spent time as an associate counsel in the prosecution of industrialists alleged to have given criminal assistance to the Nazi regime. The Flick and Krupp cases are the ones on which she focussed the most. Cecelia Goetz considered her time with the Office of Chief of Counsel for War Crimes as the most important work in which she was ever involved.

On December 8, 1947, she gave the opening statement in the Krupp Case, and impressed everyone by her “striking performance” (Amann, 2010, p.5), thus becoming the only woman to give an opening statement at Nuremberg.

Her fight to professionally exist in Nuremberg is a symbol of the challenges women faced at that time “while endeavouring to succeed in a world of men” (Amann, 2010, p.2).

Post-Nuremberg Career and Personal Life: After the Nuremberg trials, Mrs Goetz returned to NYC to work as a partner in hers and her father’s firm, Goetz and Goetz. In 1951, after orders from top US officials in Germany announced that Krupp was to be released and his property returned, Goetz moved back to D.C. to work as assistant chief counsel to the Office of Price Stabilisation. Once again, she was the first woman to reach such a high level in that agency. She also next served as a special assistant to the Attorney General in Tax Division.

Two years later, she moved back to NYC and earned an LLM in Taxation at NYU in 1958. In the same year, she married Jack Spiegel and had two sons with him. While raising them, she also had a job in various NYC law firms. In 1964, she became a partner specialising in anti-trust and commercial issues at Herzfeld & Rubin, before being appointed a United States bankruptcy judge fourteen years later. She was the first woman judge in this specialty in the Eastern District of New York.

In 1994, after retiring from the bench, she was admitted to the Florida bar and finally revealed how outraged she still was by the results of the Nuremberg trials.

Influences of Cecelia Goetz on today’s practice of law: As a prosecutor at Nuremberg, she was a role model for future women lawyers. Chief Judge Judith S. Kaye remembers that “that photograph of her presenting argument in Nuremberg was seared in my mind. What an inspiration she was for all of us” (see picture above, quoted in Anonymous, 2004).

“It was alumnae like Goetz who laid the path for a more inclusive legal profession. Goetz’s story is a story of firsts” (Anonymous, 2004). Her participation in bar associations and the women’s rights movement as well as her professional practice as a judge and lawyer made her a role model and support for “countless women lawyers” (Judge Rubin in Anonymous, 2004). She was a founding member of the National Association of Women Judges and the President of New York State Association of Women Judges. She was also Director of the Women’s Bar association of the State of New York, democratising both professions for females, who previously had no access to jobs such as judges and lawyers.

Her accomplishments are more than impressive, considering the barriers that existed for women at that time. Indeed, many law schools didn’t even admit women whereas 50% of the women enrolled in the NYU Juris Doctor programme in Fall 2004 were women. Cecelia Goetz helped legitimise females in juridical professions. Her proficiency and professionalism helped men (and society in general) recognise that women are capable of more than marrying and home caring, particularly in legal practice.

More specifically, her participation in the Nuremberg trials and passion “helped to establish international criminal law as a mechanism not only to hold perpetrators accountable for heinous offenses but also to hold victors answerable to a standard of justice often at odds with yearnings for vengeance” (Amann, 2010, p.1).