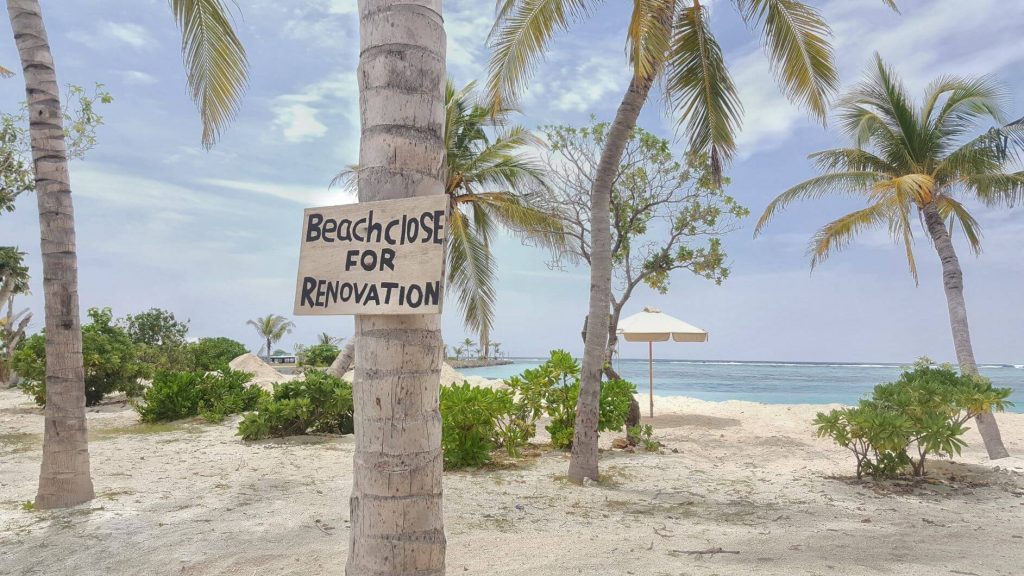 As UN climate conference COP26 approaches, vulnerable nations are rightly highlighting how they are threatened by climate change. One such nation is the Maldives, for whose inhabitants sea level rise could cause permanent devastation.

The Maldives has become emblematic of the challenges that sea level rise will bring to many societies around the world. The former president of the Maldives, Mohamed Nasheed, spoke on behalf of almost 50 climate-vulnerable countries when he stated that those living in threatened coastal areas and islands “are paying with our lives for the carbon someone else emitted”.

Yet while sea level rise is a serious threat, people in the Maldives report facing additional, more pressing environmental problems. These problems, while linked to climate change, are mainly related to coastal development and the growth in international tourism. Through speaking with islanders living on the front line of climate change, we uncovered the most urgent fears of local communities.

The Maldives is made up of around 1,200 small islands. Of the country’s 450,000 people, around half live in the national capital of Malé. The other half live on small islands dispersed across the archipelago. There are also around 150 luxury resort islands mainly inhabited by tourists and resort staff.

Beach erosion is commonly reported as the main environmental threat that the country faces. Beach erosion categorised by the government as “severe”, where land is being rapidly lost to the sea, is present today on most inhabited islands.

It is widely understood that the main cause of rapid beach erosion is coastal development, especially the construction of new harbours. While harbours help to connect island communities and bring economic opportunities to residents, they can also dramatically change how sand moves along the shoreline.

These changes can cause whole beaches to disappear. This, in turn, leads to more frequent coastal flooding and a greater risk of people’s homes being washed into the sea. On many islands, communities often attempt to build sea defences, such as seawalls, in response. However, these are costly, with limited effectiveness.

An estimated 860 tonnes of solid waste is discarded daily in the Maldives, with around 21% due to tourism. Plastic makes up a significant proportion of this waste. Every day, plastic debris, including bags, bottles and food sachets, wash up in large quantities on beaches across the islands.

Large quantities of debris also wash up from further away, such as fishing nets used by Sri Lankan and Indian fishing fleets in the Indian Ocean. Nets are rarely used in the Maldives, where fishing with poles and lines is customary. However, large quantities of discarded nets still become entangled in rocks and plants along the shoreline.

These plastics look unattractive, can be swallowed by marine life, and release toxic chemicals when they break down. Many island communities regularly organise litter pickups, but are often unable to keep up with the frequency with which new waste arrives.

Many islands in the Maldives are densely populated, with hundreds of people living within just a few square kilometres. As a result, space for housing and social infrastructure such as schools and health clinics is in short supply.

In 2009, the government passed a new law allowing international tourists to stay in guesthouses on inhabited islands for the first time. What resulted was rapid and extensive construction of guesthouses, restaurants and cafes on many islands, boosting local job opportunities.

But this expansion is putting strain on the local environment, as construction uses up huge amounts of the local sand and groundwater. It’s also harming the health of coastlines, as beach space is reduced further and further due to erosion from the sea and encroachment by buildings on land.

Land reclamation, involving the pumping of huge quantities of sand from the seabed onto the shoreline, is a common way to create more space. But this risks throwing the delicate balance of the seabed’s ecosystem out of balance.

While local communities are highly resourceful and understand intimately how their physical environment functions, they have limited financial resources to take action. What’s more, if these problems remain unaddressed then they risk undermining the abilities of communities to cope with longer term pressures caused by sea level rise, such as stronger sea swells and more flooding.

Ultimately, if global attention is focused on the sea level, we run the risk of overlooking other crucial environmental problems intertwined with climate change. As well as undertaking the essential job of cutting greenhouse gas emissions, leaders at COP26 need to recognise the immediate priorities of local communities in small island nations like the Maldives.

This story is part of The Conversation’s coverage on COP26, the Glasgow climate conference, by experts from around the world.

Amid a rising tide of climate news and stories, The Conversation is here to clear the air and make sure you get information you can trust. More.

This article is republished from The Conversation under a Creative Commons license. Read the original article.

Reflections on community, education and nature in the Maldives
New research published: Everyday life and environmental change
Getting to grips with research impact