Socialmedia, the host or the transitional phase for protests?

Any large-scale protest is a powerful tool. In England, the history of popular protests reaches way back into the 13th century. Back then, protests were more violent than now, which could be a reason for their effectiveness. Throughout modern history, social movements have been taking different forms, and as people gained more rights, these movements became more peaceful. This blog post is going to focus on the transition of global movements, from hunger strikes to protest on Twitter and Facebook; how these adaptations changed the effectiveness of protesting; and how long social media are going to be a platform for them.

To start with, let’s take a look back to the first significant protests in Britain. Remember “The Peasants’ Revolt”? Probably not, since it wasn’t quite the first well-known protest. It was, however, a very significant one. The year was 1381, and the English peasants decided to revolt against the inducted taxes and demanded equality for all. Isn’t it funny how inequality is one of the most rejected problems but still persist for centuries? That protest was rather violent, it ended up with numerous casualties, and the promises made to the peasants weren’t kept. Still, it was the beginning of a new era where people found power in speaking out (BBC). Another protest with far-reaching consequences happened in 1773 in the American city of Boston. The rebels were protesting against the British import taxes, and when three ships of imported tea arrived from China via Britain, the protest took an interesting turn: on the night of the 28th of November, the Boston rebels threw 46 tons of tea into the sea. This different approach to public opposition led to the American Revolution (BBC). These examples are just a short representation of how drastic and moving protests were at that time, many of them led to revolutions or even to wars.

In our days, social movements take a different, more peaceful format and still manage to send a powerful message. At the start of this century people were marching on the streets, and many times this ended up in civil wars or had other serious consequences. Still, from the 1990s on, mass protests often led to 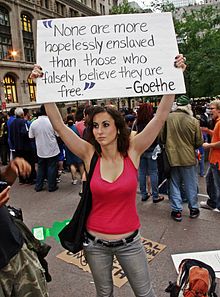 the results aimed at, like a change of the leading party or an increase in people’s salaries, rights or whatever else they were marching for. A good example would be the “Occupy Wall Street” of 2011 where around 1,000 people came to occupy New York’s Zuccotti Park. In the words of M. Castells (2012): “The spark had lit the fire”. After this initial action, street protests also started in many other American cities and finally even spread overseas. An interesting thing to mention is that this movement went global as soon as it was born on the internet, different studies showed that the hashtag #OccupyWallStreet went viral around the world (Castells, 2012, pp 156-217). The real question here is whether this protest would have ever achieved so much attention without social media. The answer is most likely not, as discussions of this protest are up till today only due to social media. Even though American people’s want to achieve more equality in America hasn’t been satisfied yet, this movement has definitely rushed the process.

Protesting on social media is now the new thing. Movements don’t have to take to the streets anymore, people choose the alternative which is most commonly a social media platform such as Twitter, Facebook or Tumblr, they use these websites to speak out, and it’s working. So why do people choose to protest on the internet rather than go out on the streets? Well to start with, some people would feel more confident and safe as no physical aggression or gunfire can happen on the internet. Sometimes people join a movement out of peer-pressure or just because it became very popular, in such cases, it’s much easier to show support on Twitter than to go out on the streets and hold up posters until you can’t feel your hands anymore. Furthermore, some individuals really want to give their opinion and support certain social movements but can’t due to their social status or other personal reasons, but they still have the chance to participate even anonymously in many online petitions and complaints which are very convenient.

However, there is always a flipside to every coin. As social media now is the new host of global movements and the world may seem more interconnected, it still has some downsides. Some argue that being extremely active on social media may be not as safe as it seems, if you give your personal details they can be easily stolen and used against you. Also, sometimes your message to the world can be undelivered, it’s actually easier for any government to control movements if they are on social media rather than if people are marching in the streets as they can edit, redo and delete unwanted information which decreases the validity and success of any social action. One last thing to mention is the new face recognition on Facebook, which automatically tags people in photos, so some of those taking to the streets some may appear on the internet even if they don’t want to.

Coming to a conclusion, a good question to reflect on is that of how long social media are going to remain a platform for protests. And is there at all an answer to this question? The internet is a really good alternative to marching in the streets, however, perhaps it’s way too good. As you scroll down the results for a google search on protests, you can observe that there are far too many now. With so many opinions and petitions online, they do lose their significance, they are not so unique anymore, and it’s harder to send a message to the world.

Castells, Manuel. Networks Of Outrage And Hope: Social Movements In The Internet Age. 1st ed. Polity, 2012. Pages: 156-217
“The People Are Revolting – The History Of Protest”. BBC Timelines. N.p., 2017. Web. 26 Apr. 2017. Found at: http://www.bbc.co.uk/timelines/ztvxtfr#zxym6sg
Other knowledge was accumulated from general statements, lectures, and seminars.