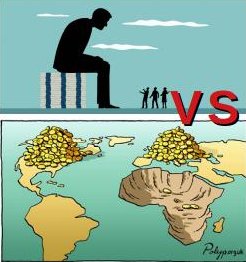 Many of the problems within the world are socially constructed (a result of human behaviour/man-made problems). We can therefore assume, at least in principle, that if we can create these problems we can also overcome them. Two socially constructed issues human societies face are inequality and poverty. These are usually mistaken to be the same problem or at least closely related, although this is not the case. We will look at these issues in regard to wealth and income. There are, however, other angles which can be examined, e.g. education or living conditions.

Societies displaying high levels of inequality have both high and low levels of wealth. Unequal societies are those in which a small percentage of the population holds the majority of the wealth, leaving the larger percentage with a small amount of wealth. For example, according to the estimates from the World Bank, South Africa is one of the most unequal countries. They found that “[…]the poorest 20% of the South African population consume less than 3% of total expenditure, while the wealthiest 20% consume 65%[…]” (The World Bank). More information.

On the other hand, societies which have high levels of poverty are those in which no one holds a high level of wealth, everyone has a low income. In these societies there tend to be higher levels of equality, as everyone is in the same economically disadvantaged position.

Therefore, inequality is generally discussed comparing those within the same population, unless discussing the unequal distribution on wealth globally, and poverty is discussed regarding one country compared to another.

Problems and solutions: Each of these problems (inequality and poverty) cause differing issues globally and so must be approached in different ways.
Inequality: This is mainly a problem for developed countries and causes many social issues, including;

Poverty: This is mainly a problem for developing countries and causes many social issues, including;

As you can see the issues each type of community faces differs and so these must be looked at separately, when aiming to implement changes. 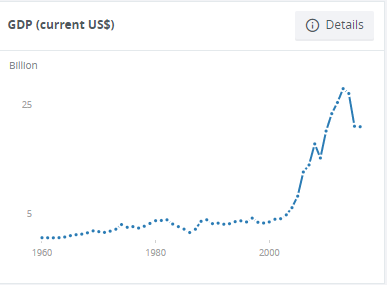 I believe that we have the potential to overcome poverty and thus the issues associated with it, but that we will never truly overcome inequality and have a fully equal world. This is because to overcome poverty we need to introduce more wealth into the country, allowing for the whole country’s income to increase. This has been seen to be possible, for example, Zambia had a total GDP of 713,000,000 in 1960, however, this increased to 21.064 billion in 2016 (The World Bank). This proves that it is possible for a country to increase their wealth and turn from a country in poverty to a country out of poverty (the trend in increased GDP in Zambia can be seen in the graph to the right). However, I believe that inequality cannot be completely overcome as this would involve a large redistribution of wealth. Those who currently hold the majority of income will be unwilling to redistribute this as this will decrease their status. Furthermore, meritocracy is a fair system which should be implemented. Those who work the hardest should yield the highest wealth and so this desired system will create inequalities. We can make an attempt to overcome the issues caused by inequality, but we cannot overcome inequality itself. For example, we can implement policies aimed at decreasing homelessness or unemployment, but the underlying cause of these issues (inequality) will not be solved.

We have created many issues globally, which are detrimental to society. However, it will not be possible to fully reverse the damage which we have caused, but we must aim to resolve it as best we can. This would be completed by looking at each problem individually, assessing where these issues occur and the side effects these have on society. It is then our responsibility to act on this information and improve the world.

Global inequality: Why we all must act
Protest and repression: Fighting the power globally
Meritocracy: A level field or an undulating valley?