Population ageing in the UK: burden or opportunity?

Surveys and statistics have shown that the UK population, as well as the world population, is rapidly ageing. According to the Office for National Statistics on 13 August 2018, 1.4 million people in Great Britain are over 85, and there are more people over 60 than under 18. Moreover, nearly 30% of babies born in 2018 will reach their 100th birthday. The latest projections claim that in 2066 there will be an additional 8.6 million people over 65 years old – as to say, a population four times the size of Greater Manchester. Ageing, a topic still underrepresented in media and press, is not just about our body, but it brings together social questions related to politics, sociology, civic participation, public healthcare and many more. It is a challenge strictly related to our everyday lifestyle considering that, since the number of older people and retired is quickly increasing, municipalities and local administrations have to deal with it (considering, for instance, access to public transports and local shops, presence of cycle tracks, care facilities, and so on). Population ageing is usually framed in negative terms, but why can’t we consider it as an opportunity? This is one of the key questions that the latest researches are trying to answer. 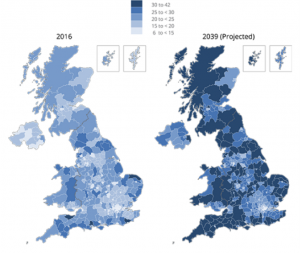 The proportion of the population aged 65+ in the UK. Source: Office for National Statistics

The primary causes that led to the issue of population ageing are essentially two. The first one is the rising in life expectancy, which means that people are living longer, thanks to the improvements in medicine and healthcare; secondly, the last few decades have seen a huge decrease in fertility, since the current “trend” is now having children later in life. The combined effects of these two major changes have different implications in developed and undeveloped countries; we also need to consider the gender discrepancy and the geographical location, since the gap between economically deprived and prosperous areas is increasing. Within the UK, coastal and rural areas are those with the highest percentage of people aged over 65 (figure 1). But if this fraction of the population is predicted to grow by 50% in both rural and urban areas in 20 years’ time, the younger population will only grow by 8% in urban areas, with no significant increase in the rural ones, according to the Office of National Statistics. The UK, compared with other European countries, is roughly in the middle of ranks for the percentage of older people within its population, but this number is expected to fall several places down in the next 20 years.

For many reasons, we tend to think of population ageing as a burden for our modern society. Older people are too much stereotyped as unproductive, as well as a worry to health and pension cost; emphasis is also put on contrasting interests of older and younger generations. Indeed, living longer has relevant implications in terms of health services, since life expectancy increases in parallel with the amount of time spent in poor health, like dementia and chronic conditions. Obviously, social care requirements increase with age as well – older people often need help with daily activities and the number of domiciliary care agencies is increasing. Despite the undeniable costs of care provision, it is important to focus on ageing as an opportunity leading to new achievements for public health and new ways of thinking about social life: the more you are integrated into your social community, the happier and healthier you live. Longevity should be a reason for celebration and, moreover, older people provide a great community contribution: active volunteers and members of clubs are often retirees, who are also more likely to attend theatres, concerts and art galleries. Another key point is the family support, as grandparents -especially those who are still in their 50s or 60s- often look after children, providing a huge help for their families, both practically and economically. Furthermore, the most recent studies underline that older communities are generally more law-abiding, thus dropping the level of crime rates. In conclusion, it is worth stressing that, even if people age differently according to gender, social class and geographical context, among other factors, the issue of population ageing is unprecedented and pervasive, with profound implications in our everyday life. It invites us to be critical, think about what kind of future we want for our society and, more importantly, how to create age-friendly environments flexible enough for every community member.

How can countries deal with ageing of societies?
Ageing and the economy
Positive ageing