Treasures in plain sight: revealing the depths of the Methodist Collections at the University of Manchester

Jane Gallagher is Digital Engagement Manager (Special Collections) and Curator of World Religions & Theology printed collections. Here she talks about the printed Methodist Collections held at the University of Manchester. 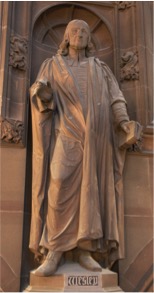 John Wesley was one of the figures whom Enriqueta Rylands memorialised in the reading room of the John Rylands Library.

Nonconformity runs through the collections of the John Rylands Library from its initial inception by the wealthy Enriqueta Rylands to the present day. Although a Congregationalist by conversion, Rylands was interested in providing readers with knowledge about all shades of Protestant Christianity. In a time of significant social change, radicalism and political agitation, Nonconformist Protestant Christianity was an important force in shaping Britain, and was particularly strong in Manchester. Today, the University of Manchester holds the national collection of one of these denominations, the Methodist Church in Britain.

The Methodist Archives and Research Centre (MARC) is one of the largest single collections in the John Rylands Library, and holds a wealth of untapped material for the study of social movement, education, printing and Imperial history. It arrived at the Library in 1977 and is owned by the Methodist Church. It is an active collection of printed and archival material – and even some objects.  The wealth of these materials, particularly the printed collections, is now being rediscovered by researchers of all disciplines

The Methodist Archives and Research Centre (MARC) is one of the largest single collections in the John Rylands Library, and holds a wealth of untapped material for the study of social movement, education, printing and Imperial history. It arrived at the Library in 1977 and is owned by the Methodist Church. It is an active collection of printed and archival material – and even some objects.  The wealth of these materials, particularly the printed collections, is now being rediscovered by researchers of all disciplines. 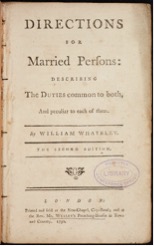 Pamphlet collections include advice on how to live daily life, such as Whately’s ‘Directions for Married Persons’ London, 1790.

As well as their content, the pamphlet collections are an interesting reflection of personal and group networks which spanned Britain and Ireland in the 18thcentury, printing practices and dissemination of information. The Green Pamphlet Collection contains nearly 3000 copies of works by the Wesley brothers and their associates, in multiple editions. Many of these works were printed multiple times over several decades, in different locations. For example, John Wesley’s reflections on the terrible earthquake in Lisbon at the end of 1755, Serious thoughts occasioned by the late earthquake : at Lisbon ran through six editions by the end of 1756. These were printed variously in London, Newcastle, Dublin and Bristol, with the sixth edition again printed in London and including a post-script which contained an account of the earthquake. This single work offers a good demonstration of the network of contacts, sharing news from abroad; printing, with many names recurring throughout the collection; and centres of exchange and dissemination beyond London.

Hymns, now considered a ubiquitous part of Christian worship, were reintroduced to the Protestant Christian Church by the Wesleys. Hymn singing became and remains a defining feature of Methodism, and the collection includes thousands of hymns books, from the very first (known as the Charleston Hymn Book, printed in 1737) to 20thcentury books of hymns and music. As well as their use in tracking the development of theology and religious understanding, these hymns mark shifts in the use of language and the influence of the outside world. Recent work, for example, has considered printed hymnbooks in the context of missionary work and the role of Empire, highlighting cross-cultural influences shared across continents. 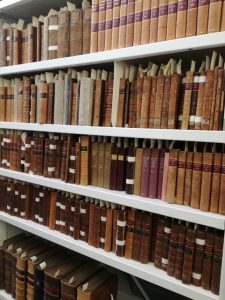 The rare books of Wesley College, Bristol Library provide an insight into education and learning in the 18th, 19th and early 20th centuries.

College collections make up a significant part of the MARC, with the rare books from Richmond College, Didsbury College and a number of other significant training institutions amongst them. Methodist preachers and ministers were drawn from all walks of life, so their college education would often start with the basics. This means that these collections are rich in unexpected finds, such as an early edition of Robinson Crusoe (London : W. Taylor, 1719) handstitched back together by an amateur; a copy of The indictment, arraignment, tryal, and judgment, at large, of twenty-nine regicides (London : Printed for J. Walthoe…, 1724), and an edition of Cook’sVoyage (London : Printed for John Stockdale…, 1784). A Library Register recording the loans from the Richmond College library from 1879 to 1892 also offers a fascinating insight into the education of ordinary people training as ministers in the 19thcentury.

The vast printed collections of the MARC cover a wide range of subjects, of which these are just a few. While the collection is based on the development and fortunes of the Methodist Church, the potential for research goes far beyond religious or church history. I am looking forward to discussing the collections and their treasures with researchers, to discover new depths to the collection.

If you would like to know more about the MARC, take a look at the Guide to Methodist Resources, available online. The majority of the printed section of the MARC is catalogued and can be searched on LibrarySearch, but do get in touch if you have any specific questions about the materials.

If you would like to know more about the Methodist Collections at the University of Manchester, contact one of our curators.