Our knowledge about the causes of food allergy is still limited. Scientists suspect that environmental factors, including lifestyle and diet, interact with a genetic predisposition to increase the risk of the disease.

Gene-environment interactions were demonstrated in a HealthNuts study of 5,300 children which examined associations between parents’ country of birth and their offspring’s peanut allergy.

The study revealed that peanut allergy was three times more common in Asian infants whose parents were born in East Asia compared to those with parents born in Australia (Koplin et al, 2014).

By increasing our understanding of the mechanism behind allergic reactions, in the future we could improve the management of food allergy, as well as prevent severe and fatal reactions.

The genes of food allergy

Studies undertaken to identify genetic markers associated with food allergy have often been limited by the size of the studies. One susceptibility locus identified for food allergy (called C11orf30) has also been linked to levels of IgE and asthma.

The suspected genes include those coding for proteins involved in the immune response, breakdown of food proteins, and integrity of the barriers (skin and mucous membrane) which protect from the allergen exposure.

Studies of twins suggest that about 80% of the risk for food allergies can be passed from parent to child, but more studies must be carried out to find out more about genetic risk factors.

The food we eat must be broken down before it can be absorbed and transported around the body to where it is needed. The digestibility of food (cooked foods are more digestible) could determine if food proteins will be tolerated in the body or not.

It has been reported that partially digested food proteins may be recognised by the body as ‘invaders’ and an allergic response will likely develop. Therefore, individuals with reduced stomach acidity (due to medication, stress, vitamin B and zinc deficiency) may be at higher risk of developing food allergy or of aggravation of existing food allergy symptoms. 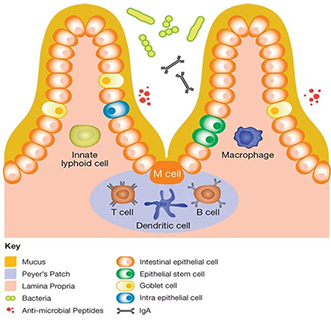 Cells of the immune system are distributed all over our body; however, the highest number surrounds our gut, which is inhabited by trillions of microorganisms known as microbiota.

Research suggests that microbiota is involved in a range of useful functions such as teaching the gut immune system to recognise foods as harmless. Not surprisingly, any changes in the gut microbiome (e.g. caused by antibiotics) will negatively affect immune tolerance mechanisms and as a result play a significant role in the development of food allergy or aggravation of allergic symptoms.

This is supported by a study which found that allergic and non-allergic infants had different composition of bacteria in their guts.

Scientists suggest that making our diet more microbiome-friendly, by consuming more probiotics and prebiotics, could help in the management or even prevention of food allergies (Cannani et al. 2019). However, more research is needed to confirm these suggestions.

The role of nutrients

It has been suggested that some nutrients may contribute to the development of food allergy: