For many years, there has been no treatment for food allergy and the only option for allergic people has been strict avoidance of the offending foods, even in trace amounts. The most effective way of avoiding allergens is to read the food labels thoroughly and to ask about ingredients when eating away from home.

Exciting developments are underway and,in the coming years,it is likely that treatments for certain food allergies, like peanutwill become available. Many are in development and at present seek to reduce the sensitivity of a food allergic subject to make practicing food avoidance easier.

Anyone involved in providing foods (manufacturers or caterers) needs to know and communicate the ingredients and possible cross-contaminants in the foods sold to allergic people.

Food producers have a very important role in labelling foods properly. You can read more about on food labelling and cateringin the Information for food businesses section.

Different kinds of medication may help if an allergic person has accidentally ingested an allergen, depending on the severity of the symptoms.

Mild symptoms such as itching, skin rashes, and runny nose may be treated with antihistamines. Bronchodilators (such as asthma inhalers) can be used to treat asthmatic symptoms.

Corticosteroids can also suppress allergic symptoms. However, these medicines will not be enough to control a rapid-onset life-threatening allergic reaction, such as anaphylaxis. 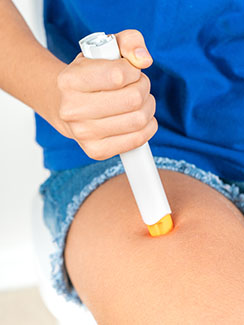 If an allergic person is considered to be at risk of having a severe allergic reaction he/she may wear a medical identification bracelet, which describes the allergy and what to do in an emergency.

In addition, they should always carry adrenaline autoinjector (often referred to as an EpiPen, though other common brands include Emerade and Jext) and administer it without delay at the first sign of any symptoms.

The symptoms may subside after administration of adrenaline but sometimes they recur after apparent recovery.

If somebody experiences a severe allergic reaction you should always call an ambulance.