The internet: Can it really influence social movements?

The internet’s prominence in our daily lives’ is indisputable, it plays a profound role in all aspects of our lives. For instance, the internet allows us to build networks, both on a personal and professional level, and pre-existing friendship ties are strengthened through communication on social media networks. Additionally, the internet provides a platform for businesses and corporations to prosper. It could be said that the internet’s uses are focused on individual and corporate interactions, but this view is what I would consider invalid and outdated. In recent years, a third political dimension has manifested itself. This third political use of the internet aims to tackle global social challenges such as gender inequality, capitalism, and climate change through social movements, which exist, in some form, on the internet.

Sociologist Manuel Castells believes internet activism aims to deliver ‘real democracy’ to society as “[…]resistance confronts domination, empowerment reacts against powerlessness and alternative projects challenge[…]” online (Castells, 1997, pg. 69). Voices that are ignored in urban public spaces are amplified and held up on a podium online, providing social movements with a framework to ‘go global’ (Edwards 2014). The speed and flow of information, on social media particularly, means that such political views can be reached on a mass global scale easier than ever before, 280 characters and the re-tweeting of others is all it takes in the internet age for a political view to be transmitted. Most social movements in the urban space are restricted in their global range due to the geographical and temporal barriers; in the urban space, widespread connections cannot be reached in the same way they can online (Jarvis 2005). Connections can be made with individuals from different areas, not just locally. Sociologists at the University of Manchester studied the urban social movement of the suffragettes, especially the social network of Emmeline Pankhurst. They found that the movement consisted of local social networks of Emmeline Pankhurst like friends, family, and friends of friends. This indicates that a lot of urban social movements grow largely out of personal social networks, rather than strangers or loosely- tied associates which dominate social movements online (Edwards 2011).

An example of the worldwide influence the internet has comes from Occupy of 2011. Occupy aimed to deal with the challenges of capitalism and austerity measures, calling for ‘real democracy now’. As Castells (2012) noted, Occupy’s social movements existed in both the public space and the network society but it was Occupy’s prominence on the internet, on social networking sites, that led to its success. Social networking sites have an ability to assemble all different people, with varying backgrounds together and this is exactly what Occupy did. Large crowds were organised through Twitter hashtags, Facebook pages, and livestreams, all of whom voiced their concerns over global economics and polity. Occupy had been described by many, including leading professor of journalism Jeff Jarvis, as a “Hashtag revolt”, which managed to exist through the contributions of protestors on Twitter, Tumblr, and Facebook. Twitter disclosed that Occupy Wall Street protesters had produced over 100,000 different hashtags related to the movement, indicating that social media movements can be widescale and global in a distinctive and new way. Perhaps the most significant aspect of the ‘hashtag revolt’ is the fact that it existed globally on both the internet and public space, although hashtags were more dominant on Twitter than in urban social spaces, people printed hashtags surrounding Occupy on billboards, printed maps and anything else they could, such hashtags were used as a way to promote the movement as a collective.

Other social media movements, including Occupy, have been favoured for its original structure. The structure of social media movements tends to be loose with a decentred structure, it is flexible to change and adjustments and as Bennett (2003) argues it is easier to form political ties since protesters, with one click, can expose to political ties they support. Maybe it is significant to state that it is just as easy to ignore opposing political views as it is to be exposed to preferred political views, the flexible nature of social media networks such as Twitter is user-generated and orientated, political views are not reinforced upon us in the same way mass media are, we have the independence to choose what to view and what to ignore. Since social media networks are user-generated and rely on the contributions of users, social movements that exist on such networks have no leader, instead, common identities of protesters are created, and views are fragmented. Social Media movements are open spaces that will always be improved and added to, for this reason, social media movements can be extremely powerful. There are no rules on when to stop posting or anyone to tell protesters to stop. The good thing about social media networks being less controlled is that campaigns cannot be turned on or off at any point, campaigns will be maintained against global social challenges, putting more pressure on the government and state to create new alternative solutions to such challenges. Additionally, it reduces the vulnerability of the threat of repression as there’s no one target to repress (Castells 2012). Such movements are autonomous and rely on the behaviours of others for it to exist, therefore are self-reflexive. 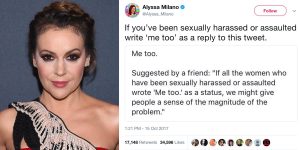 An example of a successful, flexible social media movement is #MeToo which emerged on social media massively in October of 2017 to highlight the systematic and widespread sexual harassment in all industries of work. While the movement was triggered on social media as a response to public revelations about Harvey Weinstein, a Hollywood producer, sexually assaulting women, women from all different backgrounds contributed and disclosed information of their experiences as women. This movement, like Occupy, had no central leader but managed to multiply in prominence through similar, heartfelt experiences. Since the hashtag, women have opened even more about their experiences and suggested solutions to fight against patriarchal powers, which influence global social challenges.

By looking at all the evidence I’ve provided, I think social media networks have a profound influence and success on social movements. Often, social media networks are described as a negative platform for all members, but I believe it has a positive element in challenging problems in the global society. It gives individuals a voice and platform to explain their views and direct these views to people in power. As Castells (2012) stated, it allows for “real democracy”, where every voice is heard and considered and it’s a social movement we participate in subliminally, displaying how powerful it truly is.

Should capitalism be always the one to blame for social movements?
It needs to be more than 15 minutes of fame: Social movements and corporations.
The gun control debate: Why now?