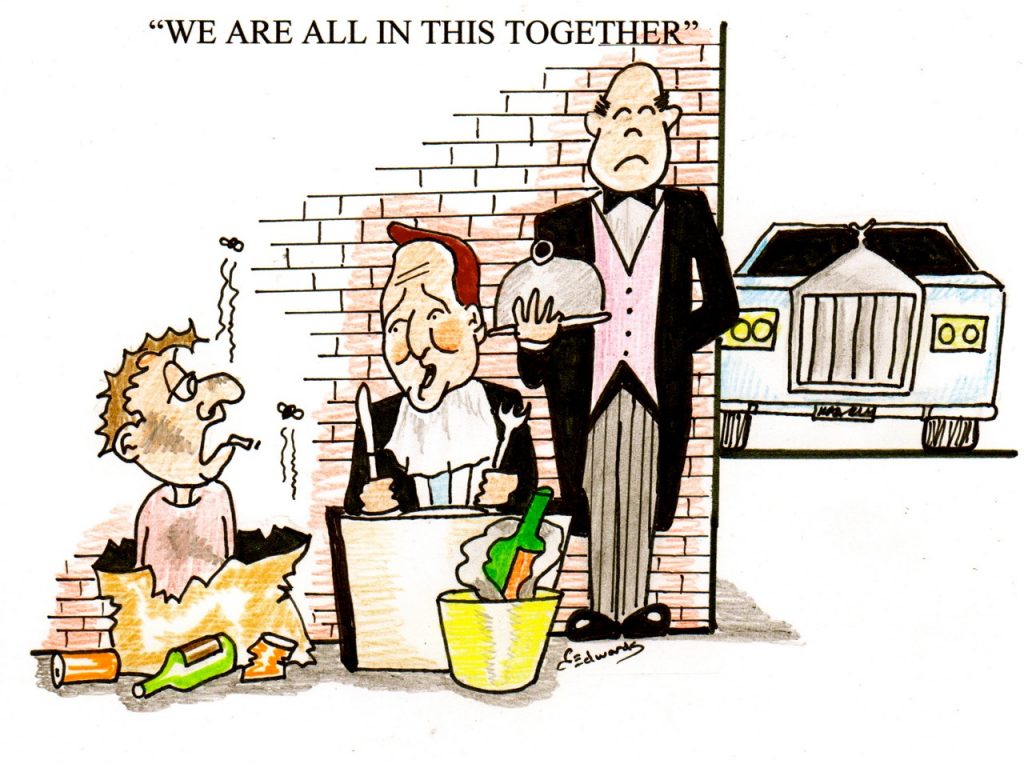 The gap is widening – Inequality in the UK.

We are all in this together!  (picture: OpenLearning/OpenUniversity)

Inequality is a big issue in the UK. 2018 saw the fall in average income of the poorest fifth of the population by 1.6% while the average income of the richest fifth rose by 4.7% (Office for National Statistics). While income per person is a somewhat useful indicator of inequality, there is far more to it than just how much money is in the pockets of people in the UK: Factors like health and other social issues are key to improving inequality as a whole country-wide.

The blame for this growth in income inequality was quickly directed at government policy due to a scheme that resulted in the household benefits for millions of families being frozen since 2015. Among other factors, this has resulted in household benefit payments not rising at the same rate of inflation, leaving families worse off income wise. However, in my opinion, a simple increase in household benefits would not be a suitable long-term fix for inequality in the UK, as there is far more to inequality than just income. Wilkinson and Pickett’s book ‘The Spirit Level’ refers to the ‘index of health and social problems’ which is an index used to measure inequality which covers a variety of areas and displays a far truer indicator of what quality of life within a country may look like. The index itself includes factors such as mental illness levels (as well as drug and alcohol addiction), children’s educational performance and imprisonment rates among others which allows it to give a far broader perspective.

Social factors must be addressed

In richer countries like the UK, the index of health and social problems and its relation to the income inequality demonstrates how important social issues are to economic factors like income. This shows that to successfully improve income inequality in the long run social factors need to be tackled. Children’s educational performance is a good example of one factor included in the index of health and social problems which will directly correlate to a reduction in inequality; making schooling more consistent across all areas of the country will allow for equal opportunity for all children country-wide. Schooling in areas of lower income is generally not as good as that in areas of higher income, which results in a vicious cycle: Children of richer families are provided with better opportunities than those of poorer backgrounds, as a later result those coming from richer families will generally have access to higher paying jobs which will further increase the income inequality between the richest and poorest fifth. Therefore, increased investment in schooling, especially targeting schools in areas of lower average income, would increase the numbers of people in the middle class and bunch the distribution of income across the country effectively in the long run.

Health inequality is also a big issue in the UK. Life expectancy per region varies hugely, similar to educational issues it is important to standardize health care across the UK. This will allow for a reduction in social inequality as a healthier lifestyles will be promoted in poorer areas leading to smaller differences in life expectancy per region and a country wide reduction in social inequality.

The main issue with combating inequality in the UK is where the money is going to come from to pay for improving education as well as the health services? The UK already has a progressive income tax rate in place meaning that those earning less will pay a smaller percentage in tax on their income whilst those earning more will pay more; this is designed to allow poorer people to keep more of what they earn. Currently, the UK’s highest earners will pay 45% of tax on earnings over £150,000, increasing this percentage and reducing the tax rate of those earning the lowest will reduce the distribution of income across the country slightly, as well as allowing the government to increase spending on education and health care, which will increase the social well-being of everyone in the country increasing quality of life for those in the poorest areas, which will over time begin to reduce inequality in the UK.

Global inequality: Why we all must act
Does a good life have to cost the earth?
Racism and xenophobia in the UK focus point: Polish migrants