Manchester History Workshop is a new team-taught module for first-year History students at the University of Manchester. The module is an important part of the History Department’s ongoing efforts to respond to the Royal Historical Society’s, Race, Ethnicity & Equality Report (2018) by better embedding equality and diversity considerations into our teaching and learning practices. One of the reports major findings was that ‘the histories of BME communities in Britain are often absent from school and university curricula’. Moreover, when those histories are represented there is a tendency to focus heavily on themes of ‘enslavement, abolition and exploitation’ in ways that students view as ‘intellectually limited’ and ‘alienating’. These findings were reinforced by a curricula audit and student focus groups conducted by our departmental colleagues in the subfield of modern British history in 2018/19 (see full report here). Students emphasised the importance of making an early intervention in the curriculum at Level 1 to address these silences and exclusions and create pathways for student research development in related fields.

Spurred by these activities, our new Manchester History Workshop module affords first-year students an opportunity to the do the hands-on work of history with a focus on recovering the, often, untold stories of generations of migrants who came to and shaped the city. We took inspiration for our thematic focus on migration from the Runnymede Trust’s award-winning Our Migration Story project, led by the Manchester-based sociologist Professor Claire Alexander and funded by the Arts and Humanities Research Council. As the world’s first industrial metropolis, Manchester’s growth was fuelled by the global trade in manufactured textiles underpinned by racial slavery and colonial expansion. During the nineteenth century, Manchester was home to a growing number of Irish migrants, Jewish refugees from Eastern Europe and African seafarers. During and following WWII, they would be joined by ‘New Commonwealth’ migrants from the Caribbean, Africa and the Indian subcontinent. Telling Manchester’s history requires engagement with this rich tapestry of cultures and experiences and through it, we come to a fuller understanding of the places in which we live, study and work today.

Manchester History Workshop – much like its namesake in the earlier History Workshop Movement – approaches ‘history from below’, centring the voices and lived experiences of ordinary people often marginalised from dominant accounts as a result of their class, gender, race, nationality, religion or migrant status. In doing this work, students draw upon rich local history traditions as well as specific research methods – such as oral history and community-engaged research – designed to facilitate the participation of ‘the subjects’ of history in its telling. We also engage community-based archives and heritage institutions that do the important work of collecting, preserving and representing these histories in partnership with communities and descendant populations. This approach is designed to encourage critical reflection on our own positionality as well as the larger ethical and social responsibilities associated with ‘doing history’.

Central to this methodology is an emphasis on opening up the research process and making the fruits of our research democratically accessible and socially useful. In this pilot year, students were tasked with conducting original, self-directed research on a Manchester migration story of their choosing and translating their findings into educational resources for delivery at Key Stage 3 and 4. Support for student-led research was provided by our partners at the University of Manchester Special Collections including Maya Sharma, Collections Access Officer at the Ahmed Iqbal Ullah (AIU) RACE Centre, Dr Janette Martin, Student Engagement Manager at The John Rylands Research Institute, and Donna Sherman, Special Collections Librarian at the Map Library. As they designed their educational resources, the students also consulted with the University of Manchester PGCE (Postgraduate Certificate in Education) History Subject Lead, Thomas Donnai, and his cohort of trainee teachers. In May, the students participated in an online research showcase event with featured projects ranging from the migration stories of Kosovar refugees to earlier developments in the African diaspora including the Manchester Pan-African Congress of 1945 and post-war Caribbean migrations. In the coming year we intend to make many of these teaching resources available for wider dissemination in local schools and other non-traditional educational contexts.

Funding from the Social Responsibility scheme has allowed the teaching team to begin scoping new topics, research sites and partnerships for future iterations of Manchester History Workshop. We employed two postgraduate research assistants – Jessica White and Harry Eyre – both with specialisations in histories of anti-racism in the North West of England.

In our first work package, Jessica performed preliminary scoping activities at a wide range of local archives to ascertain collections and capacity for class visits. Ultimately, Jessica focused her research on the Greater Manchester Police Museum and several important collections relevant to our migration theme. As Jessica describes:

‘As part of my role on the Manchester History Workshop project, I was responsible for seeking out archive material from local heritage sites that could shed some light on migrants living in Manchester. Building on my own research interests in the history of policing of ethnic minority communities, I contacted the Greater Manchester Police Museum (GMPM) to ask whether their archives could be of any use to developing the module’s chronological focus to the pre-Windrush period.

The GMPM archive came forward with several collections that would supplement the module. One collection is the Salford City Police’s Register of Aliens (image below), which contains a wealth of information of all those living in Britain who were not citizens (anyone who came from outside the British Empire). The Registers are excellent for students interested in tracing the history of migration into Manchester, particularly Jewish migration from Eastern Europe following the Pogroms in the end of the nineteenth century and from Nazi Germany. Another collection that I will be looking closely at is the GMPM’s Appointments Register, which contains information on those constables joining the force. While many constables were local to Manchester and the North West, the register shows that some constables came from further afield, hailing from South Africa and India. 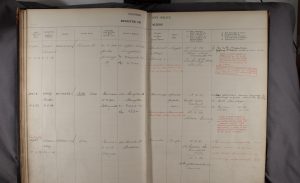 I am currently drawing upon these collections to create learning resources for the module that will enable Level 1 students to make greater sense of the nature of migration to Manchester prior to 1945. In turn, students will have the invaluable opportunity to hone their primary source analysis skills and critically engage state produced records relevant to various migrant communities.’

In our second work package, Harry followed up on some of Jessica’s initial leads at the Working Class Movement Library (WCML), performing exploratory research in relevant collections. Ultimately, Harry opted to create a standalone session drawing upon the Len Johnson Collection.

The son of a Mancunian mother of Irish descent and a father from Sierra Leone, Johnson went on to become a professional boxer and prominent local activist who fought a series of campaigns against racial and class inequality in Manchester. Johnson joined the Communist Party of Great Britain, standing as a candidate for Moss Side East in numerous City Council elections between 1947 and 1962 (image of 1949 election address below). He also played an important role in hosting the Manchester Pan-African Congress in 1945 and the following year helped establish the New International Society, a local community club that campaigned against domestic injustice but also offered solidarity to international movements opposing racism and colonialism. Upon being denied service at the Old Abbey Taphouse in 1953, Johnson also mounted a campaign against the colour bar in the city’s pubs. 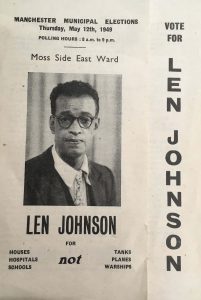 Despite Johnson’s significance to wider histories of migration, anti-racism, sport and pan-African politics in modern Britain, there is scant evidence of his contributions in scholarly works or public memorialisation. Accordingly, Harry designed a bespoke teaching resource for our students that integrates key documents from the WCML collections – including Johnson’s promotional flyers, election speeches, and political pamphlets – with secondary accounts of these wider political and cultural developments.

Next year, we intend to deliver these resources to a new cohort of students enrolled in the Manchester History Workshop. Future student projects will build upon these resources as well as the external partnerships that underpin them leading to the creation of more innovative public history artefacts in years to come. By partnering with our PGCE colleagues, these artefacts will also be used in local schools making a meaningful intervention at Key Stage 3 and 4 by bringing Manchester’s migration histories into the classroom.

Audiences involved: Outputs will be utilised in local schools and students are also being encouraged to consider the wider implications and value for our project partners in the archive and heritage sector.