Our exhibit comprises twin photo collages that express dominant representations of aid givers and receivers as perpetuated in mainstream discourse. One collage depicts representations associated with the developed world. This covers representations of: ‘desirable development’ (Ledger, 2016:73); international aid workers; poverty and underdevelopment in the global south. The other depicts representations associated with the developing world. This covers representations of: aid recipients; local aid workers; media coverage of humanitarian intervention. Our aim is to highlight the inequalities and disparities that are generated as a consequence of this hierarchical structure. We argue for the moral imperative of anthropologists to situate ethnographic focus upon inequalities ‘produced within’ development organisations as well as any ‘broader social inequalities’ that they may produce (Peters, 2016:497). 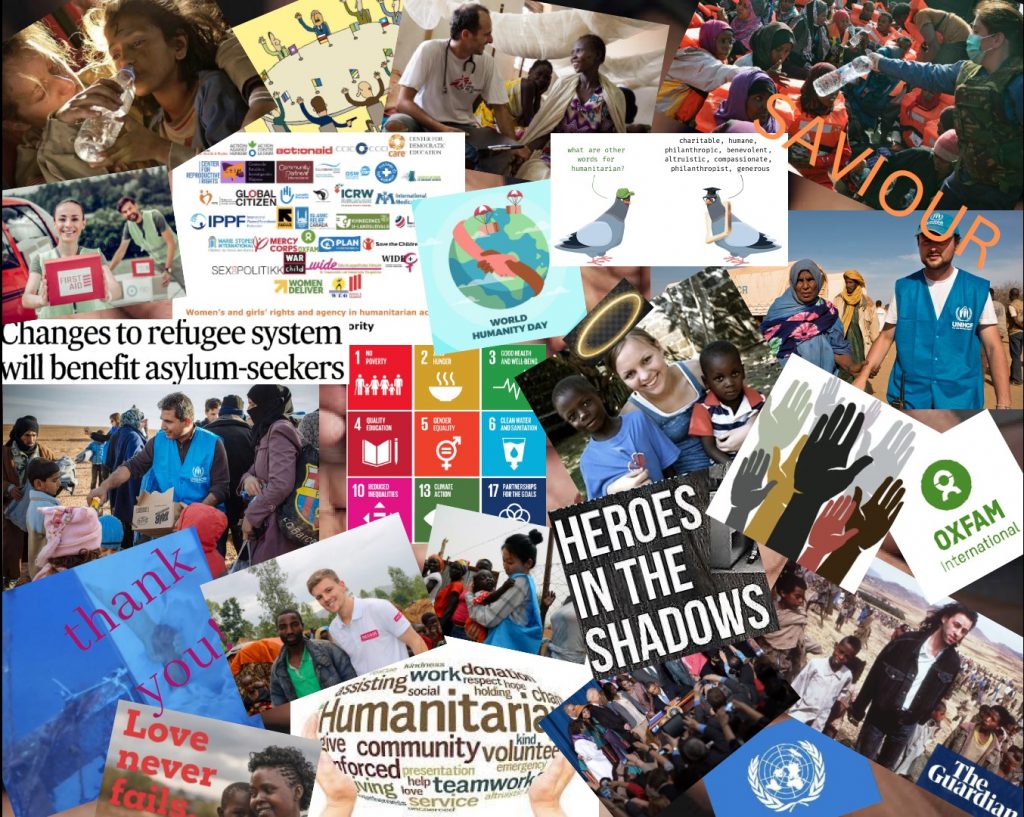 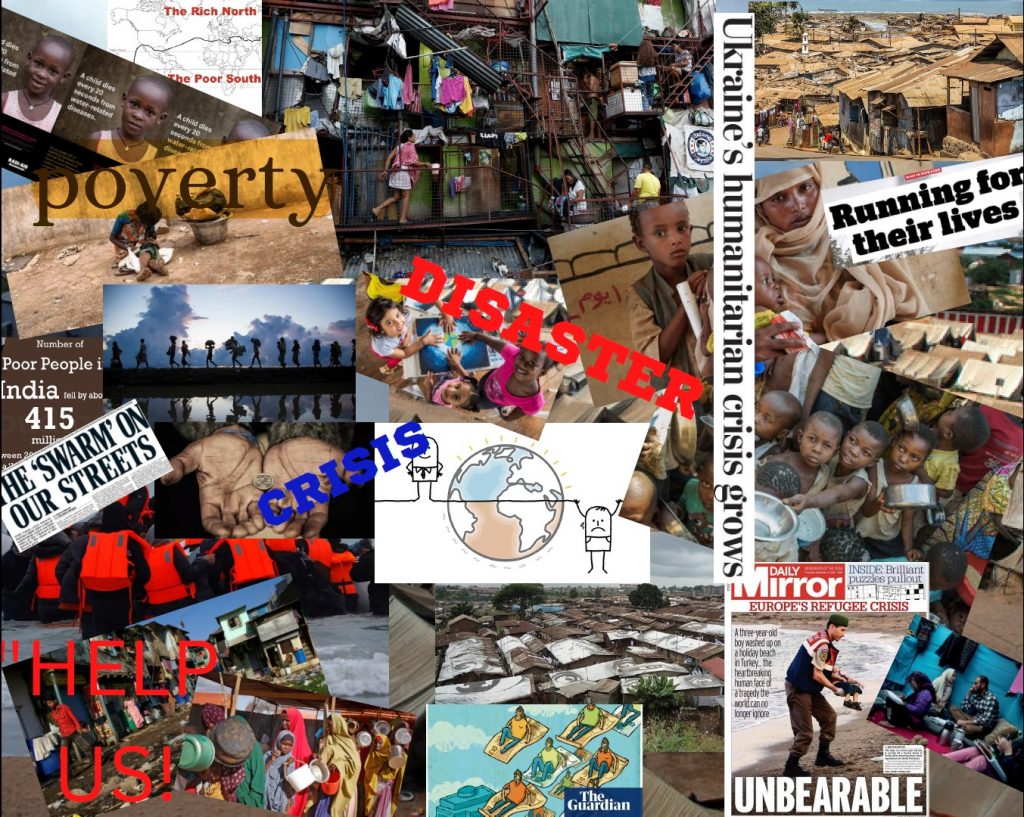 Anthropological studies into humanitarian aid indicate that development discourse is dominated by a ‘neoliberal consensus’ (Lewis and Mosse, 2006:1). This mobilises Foucauldian concepts of ‘biopolitics’ and ‘biopower’ (Foucault, 2003, 2004). Through statistical technologies and governance of conduct, discourse shapes and manages development programmes to align with corporate-governmental interests. The instrumentalisation of representation constitutes a core element of this process. Representations of aid givers, aid receivers, and what constitutes “development” and “underdevelopment” draw heavily upon ideas of ‘the West and the Rest’ (Hall, 1992). Postcolonial psychologist Kopano Ratele (2019) posits that the “developing world” is discursively cast through systems of education and visual media as an ‘area of darkness’ within the Western imaginary (ibid:59). Portrayed as being dirty, ‘disease-ridden’ (Comaroff, 2007:201), and helpless without Western intervention, aid receivers, deprived of voice and agency, are depicted in a state of ‘bare life’ (Agamben, 1998).

We assert that public reaction to these representations is a key moral force in development discourse. Anthropologist Mary Douglas (1966) notes that ‘where there is dirt, there is system’ (ibid:36). It is in the ‘margins and unstructured areas’ of neoliberal systems that the ‘idea of society’ generates the moral energy to ‘stir men [and women] into action’ (ibid:115). We argue that development discourse valorises the expansion of “system” (stability, wealth, civilisation) and “order” (health, cleanliness, nutrition) to accentuate the heroism of aid work as a form of ‘supercitizenship’ (Lutz, 2001:236).

However, these valourous representations rarely align with the applied practice of everyday humanitarian work. Shaped by corporate-governmental agendas and neoliberal logics, humanitarian aid programmes often perpetuate existing and ‘dominant power structures’ (Green, 1994:240) at the expense of those they advertise to be helping. In this sense, humanitarian projects may achieve their ‘political effects’ (Lewis and Mosse, 2006:3), whether they help or not. Consequently, ethnographic research (i.e. Peters, 2016) indicates that ‘foreign’ (international) workers often feel distressed by structural constraints imposed upon them by aid organisations. They may be unable to follow their moral convictions, be forced to abandon their project, or feel they have been tasked with the impossible, due to bureaucratic management and imperatives.

Anthropologist Anne-Meike Fechter conceptualises aid worker distress as a form of ‘moral labour’ (2016), cast as an unavoidable and implicit “part of the job”. This design generates and maintains an affect of ‘inevitable disjuncture’ (Quarles van Ufford, et al. 2003), that is also experienced by “local” workers (indigenous). Despite local employment constituting a “priority” for indigenous empowerment, local aid workers are typically afforded fewer privileges and less pay than foreign workers. Furthermore, they are subject to more screening and hold less decision-making power. This stands in stark contrast to representations of local workers empowered to make a difference. Often faced with little economic alternative, local workers must perform moral labour as they navigate the gap between the ‘ideal worlds’ and ‘social realities’ of aid work (Lewis and Mosse, 2006:2). These challenges faced by aid workers reveal how moral expectations of aid may differ substantially from actualised practice, and have the potential to facilitate ‘new damages’ and ‘renewed disparities’ (Stoler, 2013:7) among aid recipients.

Ideas of morality and ethics are often seen in correlation with religion and religious belief, this is no different in the case of NGOs. Numerous charitable organisations have deep connections to organisations of faith, with a lot of their principles following this idea of helping others in need. But is their religious aid really that helpful? Despite the fact that the Catholic Church is one of the biggest charity providers in the world, anthropologists have a hard time separating their aid inputs from their religious goals of missionary work and spreading the word of God. Their aid can arguably be seen at times as conditional interactions, in their aims of conversion among the aid recipients. “The primary problem with faith-based groups, especially Christian organisations, is their propensity to proselytise” (Lynch and Schwarz, 2016:636). Aid should never be conditional, and the infiltration of personal moral views and opinions allows excess subjectivity to dominate the structures of aid organisations.

A final concept that our exhibit gives light to is that of the separation between the aid worker and the aid recipient. Linking to disjuncture, as aforementioned, aid workers conduct self-governmentality which results in the emotional and psychological distance from individuals they work to support. Redfield’s (2005) minimalist biopolitics illustrates how human’s ‘biology’ is prioritised over their ‘biography’ in refugee camps. The meaning of humanitarian work is reduced to the bare minimum of keeping survivors alive as opposed to being attentive to their individual needs and requirements. This produces a boundary between the two parties involved in this field of work, making the fostering relationship between aid workers and recipients an impossibility. Conventional notions of humanitarianism continue to separate the very actors involved. This fails to recognise the necessity of a “relationship-focused approach” (Eyben, 2006; Fechter, 2012:1397) within aid work which may cultivate collaborative solutions to humanitarian issues. This holistic approach to the involvement of both foreign and local workers in aid projects may assist in giving voice to and mitigating the effects of overlooked inequalities both within and without humanitarian organisations. An ethos such as this may broaden the scope for the anthropology of humanitarianism and transform representations of the aid worker and aid recipient for the better.