According to the UNHCR, in mid-2022 103 million people were estimated to be forcibly displaced worldwide (UNHCR, 2022). Of these, 32.5 million are refugees, and the majority (72%) originated from only five countries: the Syrian Arab Republic, Venezuela, Ukraine, Afghanistan and South Sudan (UNHCR, 2022).

Their displacement may come from various reasons, be it climate-related insecurities, violent conflict or personal persecution. But staying in refugee camps constitutes a short-term solution to their safety (or not even a solution at all). Refugees face a series of challenges when in the camps, ranging from personal insecurity, separation from their families, limited resources and connections, and, above all, the bureaucratic system responsible for their fate. To address this particular point, we have developed a board game called “The Road to Resettlement”. 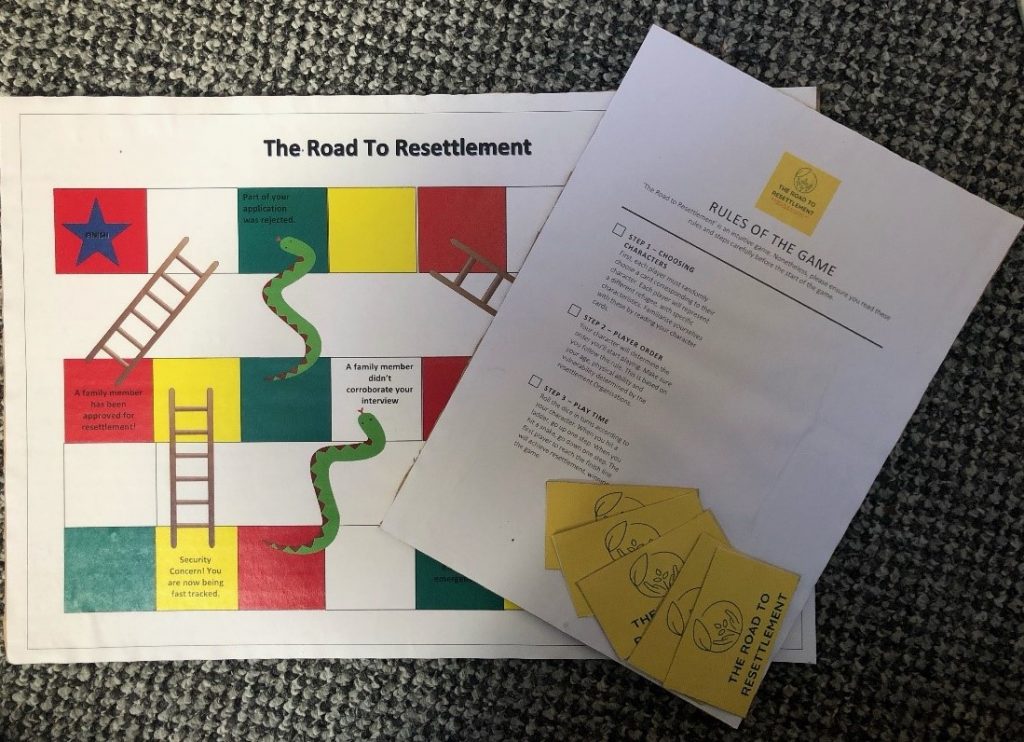 This game aims to highlight the idiosyncrasies of the bureaucratic process that refugees have to navigate in order to be resettled. We draw on the ideas of Fred Nyongesa Ikanda – who argues that ‘it is a contradiction that although the UNHCR demands transparency from refugees, its own actions are characterized by opacity, arbitrary measures, and power inequalities between its staff and the refugee clients it exists to serve’ (2018: 582) – and the case study of Marnie Jane Thomson (2012), advocating for a simpler, and more transparent process that does not treat refugees as potential criminals, or ‘guilty until proven innocent’. We focus on aid recipients’ experiences – the expectations of helplessness and vulnerability placed upon them, and the suspicion that they are treated with – and the value of using this to inform future humanitarian action.

Our game is contextualised by the international prevalence of a UNHCR-backed, tripartite refugee response policy of voluntary repatriation, integration or third-country resettlement (Crisp 1986:57; Suhrke 1983:167 cited in Thomson, 2012: 188). Thomson states that ‘- the UNHCR promotes repatriation to the country of origin as the universally ideal solution to refugee situations, and it has been the most common option in Africa -’ (2012: 188), while Ikanda argues that ‘resettlement is coveted in many African refugee contexts due to the unproductiveness of camps as spaces for hosting refugees and the generalized poverty of many of these settings’ (Ikanda, 2018: 593).

Each character in our board game has a card detailing their own story – inspired by the accounts that we have found in anthropological readings, or through stories shared online – and whether they are positioned advantageously or disadvantageously in relation to resettlement, based on UNHCR’s prioritisation, as detailed by Ikanda (2018). Each snake and ladder is similarly taken from ethnographies that outline the struggle that refugees seeking resettlement face. For example, one snake states ‘you have been set back by your connections outside the camp’. This is inspired by Ikanda, who describes how long-term camp inhabitants became a new priority for resettlement, but in order to achieve this, they needed to present themselves as helpless and vulnerable, with no outside connections (2018: 581).

The resettlement process draws on the deservingness paradigm reflected in broader socio-political discourses, wherein ‘- the subject positions that are offered to displaced people … are those of the deserving refugee and the undeserving immigrant, both always being other, potentially threatening, and suspicious’ (Holmes and Castañeda, 2016: 19). The treatment of refugees with suspicion is reflected in Thomson’s account of a Congolese family’s journey with resettlement from a Tanzanian camp after their 2006 case was seemingly closed after Mwitali stated that his cousins were his brothers during a family verification meeting (the family did not receive a formal explanation for case closure, reflecting the opacity of resettlement operations). While cousins are commonly referred to as siblings in Congo, Thomson argues that this cultural specificity is often believed by resettlement officials to be a fraudulent attempt to strengthen other family members’ resettlement claims (2012: 194). Thomson argues that ‘- assessing refugee credibility becomes the primary preoccupation of aid representatives in the processing of resettlement requests (Sandvik 2008; Stoler 1992)’ portraying refugees as untrustworthy (2012: 193). Not only do refugees have to compete with the opacity of a system that seeks to discredit them (Thomson, 2012: 198), but they must also learn to navigate ‘the ever-moving categories of suffering [that] engendered a pervasive sense of uncertainty in refugee lives, particularly because of the arbitrary nature of humanitarian decisions’ (Ikanda, 2018: 593).

Given this, our board game is set to show how different people constitute and represent different forms of vulnerability and learn to adapt these to the system they’re inserted in in order to play it as favourably as possible, in order to achieve resettlement. Through the snakes and ladders, the players get a hint of the difficulties posed by the bureaucracy of the system and its ever-changing notions of vulnerability and what and who possesses the ideal notion of ‘refugeeness’ favourable for permanent or temporary resettlement. We argue that by acknowledging these, one can begin to comprehend the challenges faced by refugees, and how the system is flawed in its disregard for the personal experiences of its beneficiaries when it should be using it to inform humanitarian action. 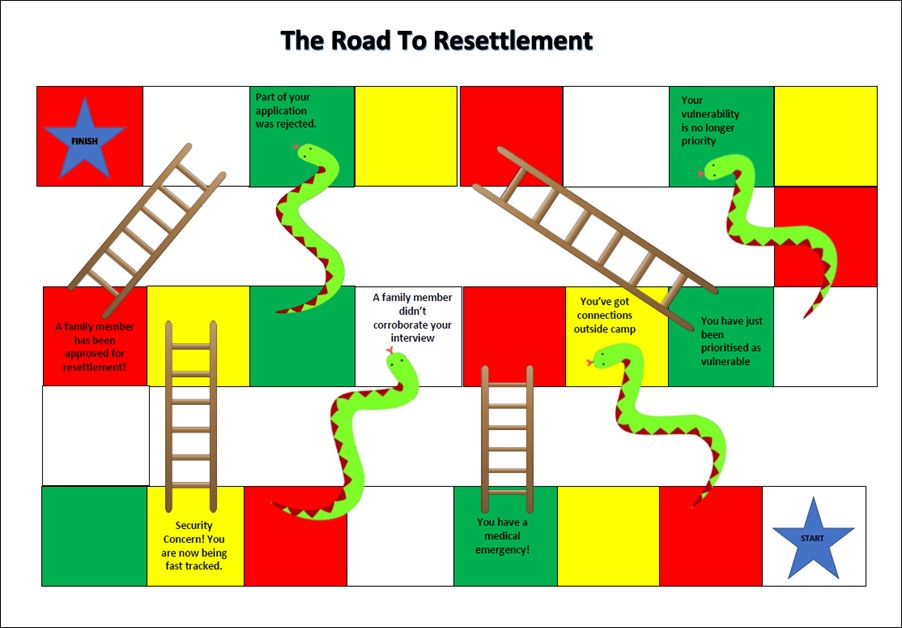 Image 1 – “The Road to Resettlement” Board Game 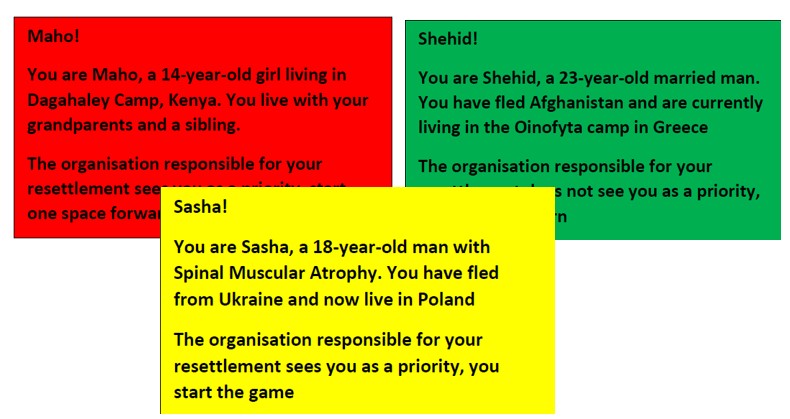 Image 2 – Three of the character cards 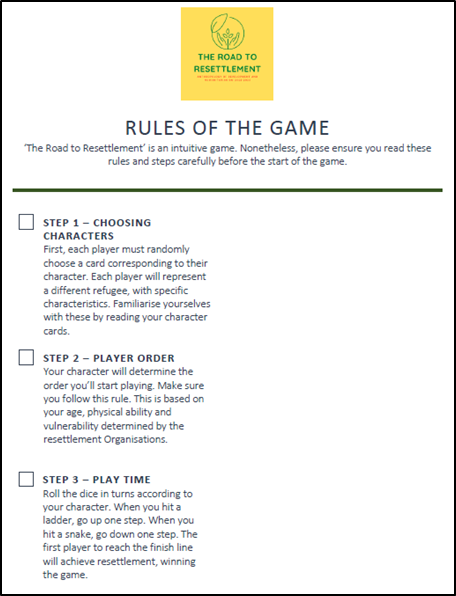