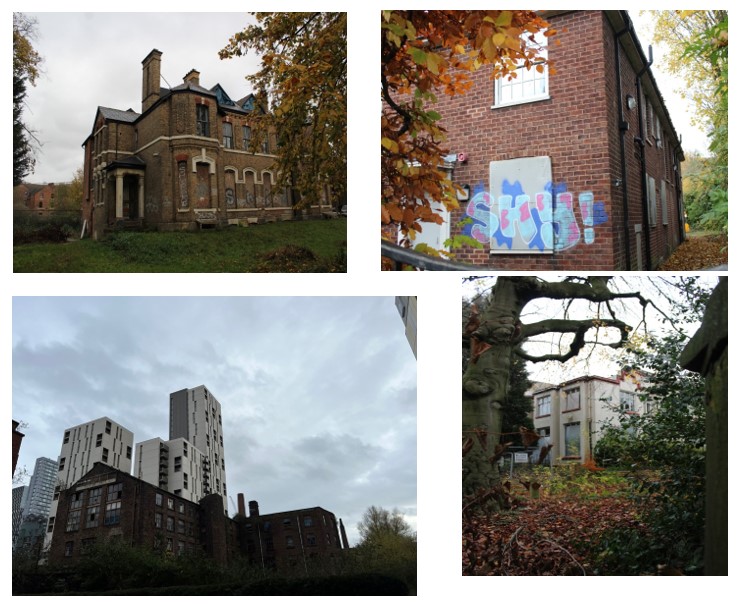 In this exhibition, we focus on capitalistic conceptions of crisis and how they shape development via the example of the housing crisis in Manchester. This is a relevant topic since the lack of affordable housing is an issue that impacts populations around the world. We researched different housing development projects across the globe and came to the conclusion that a local focus would be more impactful. We feel there are important similarities here with the work of organisations around the world focusing on housing issues, such as SALVE. In researching how housing development projects follow neoliberal ideals, we examine how the housing crisis has evolved and many individuals, families and subsequently children can end up living in precarious situations. We also felt it important to rethink development as being simply a third world phenomenon and delve into the issues of development in ‘advanced’ economies.

We exhibit a photographic collection of buildings around Manchester, some abandoned, some current development projects, and some redeveloped or brand new. Displaying such photographs contrasts the living reality of Manchester’s homeless population against the backdrop of continual developmental efforts that inadequately attempt to combat the housing crisis, the way in which sustainable development projects are framed as an avenue for capitalist expansion, and the resultant continued precarity experienced by the homeless. 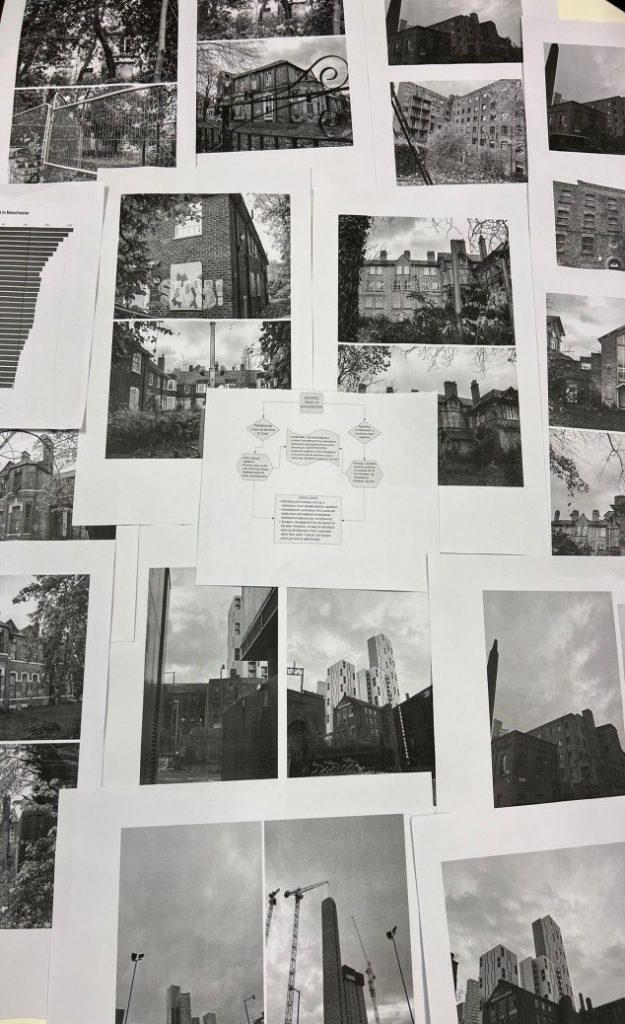 We employ Klein’s (2007) framework of disaster capitalism to argue that the housing ‘crisis’ has created a space for capitalist expansion under the guise of development efforts. According to Klein (2007), neoliberal capitalism has developed a shock doctrine that encourages the expansion of free market policies by taking advantage of the chaos and ambiguity brought on by crises, both natural and social. We propose that the housing crisis posits a similar situation, where developmental efforts seem to be beneficial to expansion of capitalist policies in the name of empowering the homeless and poverty-stricken populations.

Sustainable development, especially, emerges as a controversial landscape. On the one hand, we see the rise of eco-sustainable projects which claim to boost employment, invoke climate responsibility, and cultural multiformity. However, urban cultural spaces often advance capital accumulation by inviting new investment flows and boosting land rates (Harvey, 2002). This can be seen in our exhibition and around Manchester, where abandoned warehouses are converted to high-end apartments rather than affordable housing, and public funding is pumped into urban cultural spaces which only serves to increase rent and land rates and decrease affordability for the poor. This can be seen in some of our photo exhibits. We concluded that even if some of these high-end projects are done in the name of eco-sustainability, they are not accessible to the majority of the population and so the benefits are limited. Projects need to be socially sustainable also, meaning that they actively add to the current and future generations’ ability to build liveable and healthy communities. Often the development of high-end apartments is part of the gentrification process in which previous communities are pushed out by the rising prices in that area brought on by development.

Moreover, the housing crisis has profound effects on individuals experiencing it. Redfield’s (2005) minimalist biopolitics offers an important theoretical standpoint to investigate this. Redfield discusses vulnerable populations and the NGOs providing aid to them in times of crisis (such as refugees fleeing conflict or a disaster), arguing that the construction of crisis and emergency reduces victims down to zoological, not biographical, beings. These populations lose their voice and sociality, and are not benefited in the long run when their crisis is deemed to be over and immediate aid stops. We believe this is applicable in our research context too. We acknowledge the importance of organisations such as Shelter and what they offer to those experiencing housing crises. However, this aid, whether it be a raincoat or a room for a night, reduces people down to their biological needs, which causes the full complexity of their biographies to be downplayed. Echoing Redfield, offering aid in place of constructive development does little to confront the roots of a long-term problem. Thus, we must build more accessible houses for these communities or state support to help with (re)building a safe and stable place to call home.

Further, we must also consider the implications of framing this situation as a crisis, which can exceptionalise the issue. According to Ramsay (2020, p. 21), global capitalism has generated a “precarity of everyday life.” In this context, it means that looking at the crisis as an ‘exceptional’ state to be solved by implementation of neoliberal development strategies is a mistake. One instrument perpetuating the precarity of life for the homeless is microfinance, which is the lending of small, non-mortgage backed loans to lower-income families or individuals, to put towards their housing. Housing microfinance has advanced among low-income populations both in the Global North and the Global South due to the market-driven expansion of financialisation. A few characteristics set housing microfinance apart, such as its acceptance of borrowers, housing arrangements that are more informal, as well as the fact that non-profit or not-quite-for-profit organisations actively promote it (Grubbauer and Mader, 2021). However, exploitative rates render the poor even more indebted, continuing their precarious living conditions even after ‘help’. Homelessness, thus, is not just an exceptional problem to be solved, but also a problem rooted in capitalist expansion and hence neoliberal development policies are just a bandaid preventing profound reformation of the system.

Thus, we contend that rethinking development requires reimagining crisis as a permanent feature of capitalist modes of economy. We suggest that, firstly, we need to rethink sustainable development. This includes, for instance, converting abandoned buildings into affordable housing for the poor rather than pouring public funding into ‘development’ projects that aim to reform the aesthetics of an area and end up inflating prices. Moreover, we need to reconsider the state of homelessness from being a state of exception to be solved by aid and neoliberal development policies, to being an everyday reality, which forces people into adopting unfair means such as exploitative microfinance as an escape. By seeing the housing crisis as part of the everyday, it can allow for the full biographies of people to be viewed when creating long-term, sustainable solutions. Ultimately, rethinking the housing crisis involves development that does not put the needs of the homeless as secondary to their incorporation into the economy.

Ramsay, G. (2020) Humanitarian exploits: Ordinary displacement and the political economy of  the global refugee regime. In Critique of Anthropology, 40(1), pp. 3–27.