Anthropology of aid / The issues / Humanitarianism in crisis situations / (2018-9) To what extent can neutrality prevail in a state of crisis?

To what extent can neutrality prevail in a state of crisis?

The red cross emblem is ever present in natural disasters, armed conflict and other humanitarian crises across the world. Medical humanitarian NGOs have sought to alleviate suffering based on a niche, biomedical perspective. Neutrality is a fundamental principle of the Red Cross and Médecins Sans Frontières (MSF), yet when placed in states of crisis, humanitarian aid workers must often choose whether to remain neutral or take a political stance in regards to whom they are offering medical support. The former involves offering aid to anyone, regardless of their origins or beliefs, while the latter might mean humanitarian organisations removing themselves entirely from a challenging environment if they believe the problems to be too political in nature.

Today, impartiality and neutrality stand at the core of humanitarianism. This may imply helping all victims in any conflict, but, in practice, adhering to those principles in humanitarian crises often poses numerous problems.

According to the International Federation of the Red Cross and Red Crescent Societies (IFRC), the principle of neutrality is crucial to humanitarian aid, and aid workers must not take sides, or participate in hostilities. This also includes that the NGO does not express affiliation to any specific political party, religion, or other identifiers. For the IFRC, neutrality is not only a principle according to which they must act but, more importantly, a ‘state of mind’.

Terry (2011) examines the position of the International Committee of the Red Cross’s (ICRC) work, arguing that ‘humanitarian action must remain independent and strive for as neutral an image as possible if it is to reach those in need on all sides of conflict’ (22). The author pushes for a neutral position as it enables aid organisations, such as the ICRC, to enter politically complex crises and provide medical and humanitarian support to those suffering the most. During the Afghanistan conflict between the United States and the Taliban, ICRC managed to create a space for themselves, enabling them to pursue their core goal: to save lives.

Because of the organisation’s neutral stance and ‘refusal to engage’ (Terry 2011), ICRC was able to do the following: negotiate polio vaccinations, transfer the dead to loved ones, provide first-aid training to Taliban soldiers and provide medical relief to anyone injured in conflict.

Despite this example, scholars such as Rieffer-Flanagan and Redfield have largely criticised neutral humanitarianism and suggested that ‘neutrality is no longer a valued concept when fighting parties target civilians’ (Rieffer-Flanagan, 2009: 889).

Many NGOs complicate the principle of neutrality in practice. MSF insists that they remain impartial but do not often stand neutral towards the crisis they witness. MSF came into existence when Bernard Kouchner, who had previously worked for the Red Cross, rejected the ‘neutral and apolitical approach of the ICRC’ (Rieffer-Flanagan, 2009: 889), and decided that it was morally wrong to remain completely unbiased in some situations of crisis.

Furthermore, as asserted by Devine, for MSF ‘being impartial means we only consider a person’s humanitarian needs, not who they are. (…) Neutrality, on the other hand, means not taking sides. In practice, however, MSF has sometimes felt compelled to do exactly that: After witnessing some of the atrocities of the 1994 genocide in Rwanda, for example, we called for military intervention to stop the perpetrators’ (Devine, 2018).

As Redfield argues, neutrality is, rather, a strategy, variable to the multiple contexts of suffering populations. While the MSF officially states ‘neutrality’ as the core principle, témoignage is an equally and sometimes superior principle to the former. MSF adopted this term to signify an ‘active sense of witnessing, as motivated by humanitarian concern for suffering’ (Redfield 2010: 61). Unlike the ICRC’s approach, this sense of neutrality is not predicated on the nation-state system and instead challenges sovereignty. In extreme cases, témoignage turns into advocacy through statistics, reports, public appeals, and at times, even protest.

At the peak of the refugee crisis in 2016, medical humanitarian NGOs became increasingly present on the margins of Europe. Media representations of refugees and migrants in precarious, and sometimes, life-threatening conditions highlighted the urgency to alleviate suffering, especially from a biomedical point of view. In March 2016, the highly controversial EU-Turkey deal was signed as an attempt to restrict movement towards Europe from the Eastern margins of its borders. A few months later, MSF openly refused EU funding in a Twitter statement. 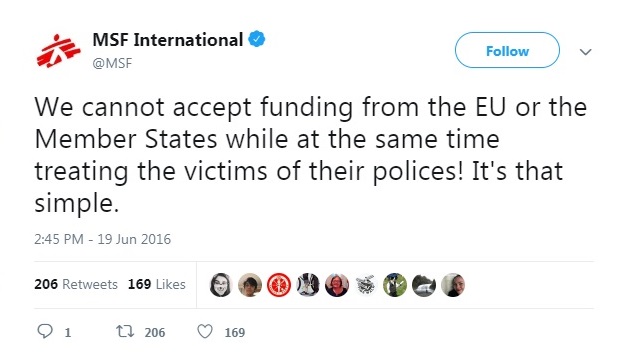 By taking Redfield’s claim into account, we could argue that MSF may still be neutral. Their aid work does not respond to the state system and is instead a challenge to the European Union’s sovereignty over borders. MSF clearly states their opposition to the European border regime delineated by the walls of Frontex surrounding EU countries. Multiple authors (Cabot 2014; Andersson 2014) stress that Frontex, as well as a series of policies and regulations in regards with control,  have resulted in the worsening conditions of migrants’ and asylum seekers’ journeys.

In Afghanistan, the Red Cross’s ability to remain neutral provided the aid workers with access to recipients. While NGOs such as ICRC and MSF adhere to the humanitarian orthodoxy of neutrality as a core principle (at least in theory), humanitarianism and politics are impossible to separate.

To conclude, given that ‘humanitarianism and politics are tending to merge’ (Fassin 2007, 509), can neutrality truly prevail in a situation of crisis? Should humanitarian actors take a stance on the structural and historical preconditions that led to their recipients’ suffering? Or should they opt to maximise their outreach by focusing on the mere alleviation of suffering?

These are the ethical dilemmas aid workers must battle in and out of the everyday. And as Redfield’s (2010) work suggests, humanitarianism in practice reveals the impossible problem of neutrality.

Cabot, H. (2014). On the Doorstep of Europe: Asylum and Citizenship in Greece. University of Pennsylvania Press.