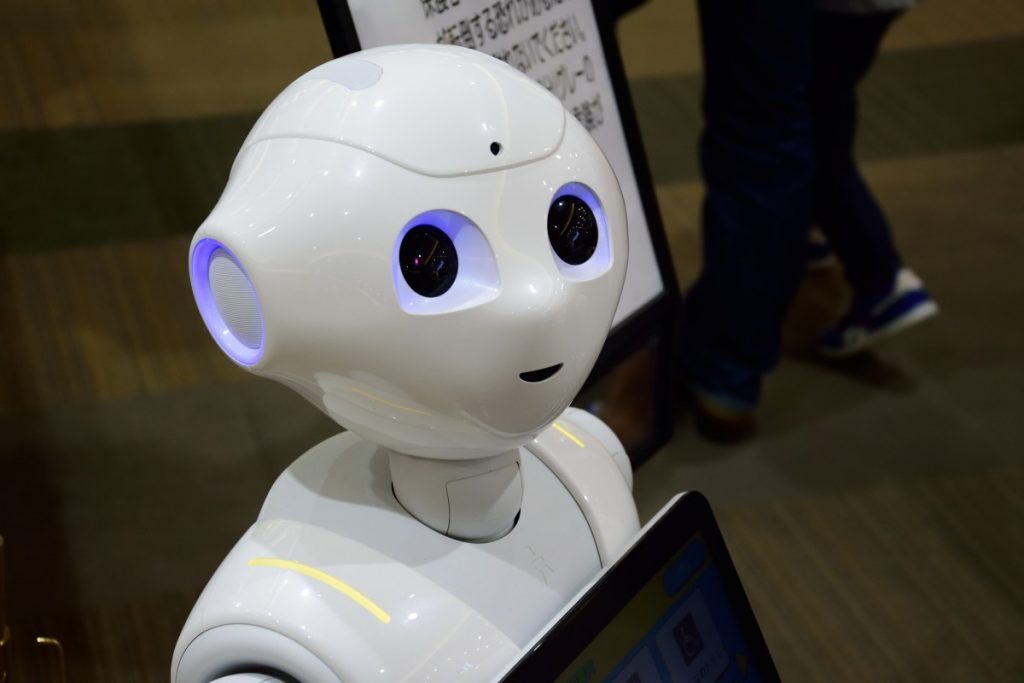 What can robots do in population ageing?

Nowadays, people are trying to apply robots in many fields, such as education, manufacture and so on, because we can order them to do anything we want by programming, and they can achieve the goals people expect effectively. As for a student in computer science, I always aim to find out what role modern computer technology can play in solving social problems, population ageing, for example.

In fact, population ageing does not exist in any particular countries or regions. The world’s population is ageing: virtually every country in the world is experiencing growth in the number and proportion of older persons in their population (United Nations,2015). Population ageing gives rise to lots of social problems. For countries, it can threaten the development of economy due to the decline of working-age population and expensive pension; for normal families, people have to work much harder because they must be sure that they have enough money to support the larger family structure—their parents, grandparents, their mate’s parents, grandparents and children. It has caused tremendous pressure on young people. Moreover, it cannot be overlooked that elders need care, it requires that there are not only sufficient necessities, but also companionship.

We have invested a lot of human resources in caring for the elderly in the community. However, with the number of elders keeping rising, it will require more and more people to do that. As mentioned before, labour is pretty valuable in a society which is undergoing population ageing, so we must find a new way to take place human in caring elders. There is no doubt that computer is a good choice since it can follow the orders from people after programming correctly. In fact, robots have more advantages over humans in this field. Robots can supply preferable Medicare. The so-called individualized medical treatment is to fully consider the individual differences in the formulation of health care and treatment programs, including symptoms, genes, living habits, compliance and so on. In the process of diagnosis and treatment, if we can find the treatment plan that best matches the individual differences, we will greatly reduce medical costs, improve treatment effectiveness, and improve the efficiency of medical services. The robot is a new personal terminal that can collect more relevant data by means of visual, speech, and carrying peripherals. For example, it collects information on critical medical treatment such as whether the patient is on time for medication. All the information helps doctors develop personalized treatment plans (Beijing Evening News,2017). What’s more, more ways of amusement can be provided by robots. Compared to people, robots have more skills to please elders because they can use any useful information on the internet. Old people could learn everything new that they wanted through the robot, even play games or chat online. Do not worry that elders cannot use robots since the only thing they need to do is to state their requirements to the robots.

Of course, there are also some disadvantages to applying robots. First, it will take lots of time and money to invent the appropriate machine to suit every case. Humans are a highly intelligent species, we can work out different methods to solve various problems. However, robots only can do what the codes tell them to do. Although deep learning and neural networks could give the machine the ability to study, these two methods also require very complicated codes and algorithms, which is another huge project. Besides, robots’ way of movement is very simple now, although scientists have tried to improve their adaptability to different terrains, they are still difficult to handle as quickly as humans to deal with different terrain methods, and even downstairs is a huge challenge for them. 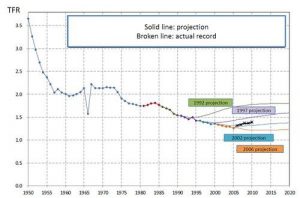 Using robots in aged care is not a particular person’s idea, many researchers started this exploration after the concept of robots appeared. For example, the “My Spoon Robot” can aid someone with eating problems, and the “Sanyo Bath Robot” provides hygienic care to older adults. Meanwhile, a number of scholars also pay attention to factors influencing older adults’ acceptance or rejection of care robots; and older adults’ attitudes toward socially assistive robots (Tijs Vandemeulebroucke and Bernadette Dierck; de Casterlé and Chris Gastmansa，2018). When it comes to application in reality, Japan should not be ignored. As is known to all, Japan is one of the countries with the fastest ageing population due to its low fertility rate. The figure below is the total fertility rate of Japan since 1950.

There is a rapidly increasing imbalance between the number of older adults needing care and a decreasing number of caregivers in Japan, which pushes them to apply robots as soon as possible. Pepper, for example, it is one of the most advanced robot in the world (also can be seen in Museum of Science and Industry, Manchester). It is equipped with speech recognition technology, articulation techniques that can move smoothly, and emotion recognition technology that analyzes expressions and tones to communicate with humans. Now it is working to help elders to do some simple exercise in a nursing home in Tokyo, and it gets along well with local residents. According to the report, Pepper not only contributes to caring for ageing people, supplying assistance in children’s education, it will also bring huge income and profit to Japan in the future. METI estimates the domestic industry alone will grow to 400 billion yen ($3.8 billion) by 2035, and George Leeson, director of the Oxford Institute of Population Ageing, also said “It’s potentially a huge market”.

I believe that more and more new types of robots will be put to use in the care of the elderly in the future. Because they relieve the pressure of the elderly care industry, and also bring huge benefits. The relevant technology is still not mature enough now, however, with the development of science, people will get used to getting along with robots in the nursing home.