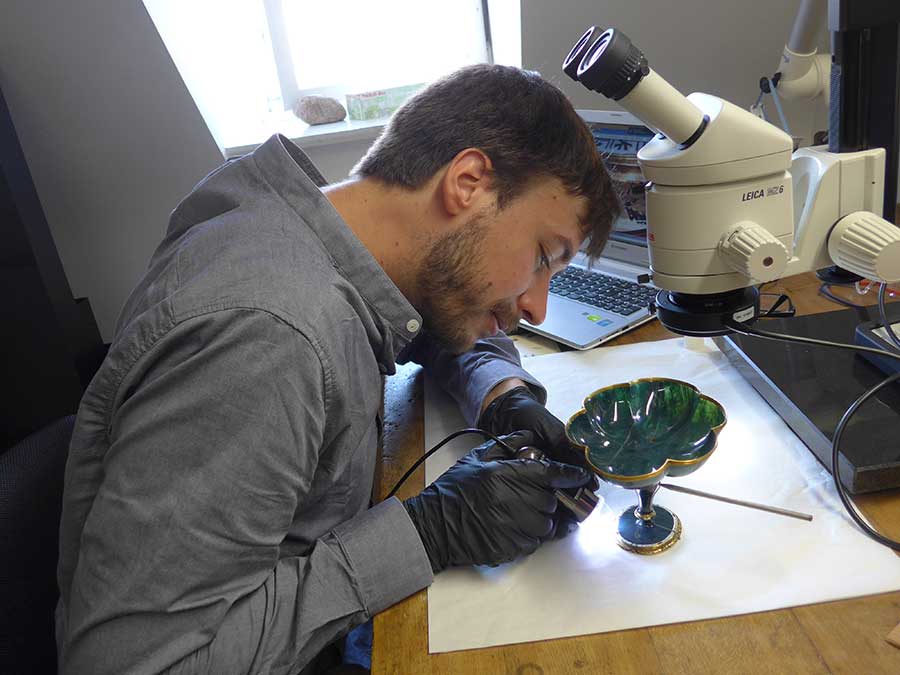 The British Academy has awarded Manchester historian Dr Stefan Hanß a Rising Star Engagement Award 2019/20. This scheme is “designed to enable established early career academics to actively engage in the work of the Academy and to enhance their own skills and career development through the organisation of events, training, and mentoring activities for a wide range of other early career researchers.”1 Around 25 leading early career researchers in all the fields of the humanities and social sciences will be awarded as ‘Rising Stars’, as the British Academy announced recently, and the award allows Stefan Hanß to further develop and build on his expertise in early modern material culture studies.

“I am super excited organising this truly interdisciplinary event”, Stefan Hanß said in anticipation of Microscopic Records: The New Interdisciplinarity of Early Modern Studies, c. 1400–1800. Studying early modern hair, featherwork, and perfumed textiles with scientific technology, Hanß has been at the forefront of using digital microscopes for studying artefacts’ material properties and their role in shaping cognition, sensory experiences, emotions, and societies. He is now about to organise an event that embeds these interventions within a broader culture of technologically informed methods of historical enquiry.

“The ways people experienced the world relied on the ability of things and matter to elicit emotions and behaviour,” Hanß says, “and it is about time to test the use of a whole range of scientific methods for broadening our understanding of the early modern period.”

“Historians usually find information in archives, but more recently we also work with objects since there is simply no point to ignore the rich information that artefacts may provide about the past societies that we study. Objects’ microscopic records, thus the information that can be extracted from a close examination of things by the use of technological instruments, can reshape our understanding of past societies. However, historians hardly explored the possibilities of studying early modern objects with scientific methods and technologies.”

Hanß is now about to organise an engagement event which aims at new conversations about microscopic records of objects from between ca. 1400 and 1800, a time at which discoveries and empire-building resulted in ever new networks of cultural contacts that shaped early global consumerism as much as people’s sensitivity to and engagement with the world of matter.

By asking how the theoretically informed use of scientific methods can advance historians’ knowledge, this event shall establish pathbreaking interdisciplinary cultures that make science a crucial element of a historian’s toolbox. Hanß reaches out to other disciplines, seeking to establish new interdisciplinary conversation and collaboration between history, archaeology, and the sciences.

“This event aims at far more than being a mere conference”, Hanß emphasizes. “It aims to overcome the reluctance of historians to embrace scientific methods by providing participants with actual guidance and hands-on training on the use of such technology. I wish to connect early career researchers working on early modern history with key leaders of the field who have an expertise in the scientific analysis of historical artefacts. To facilitate participation of young researchers, there will also be some travel bursaries available.” The focus of this event, comprising masterclasses and a one-day symposium, is thus on knowledge sharing and network creation which shall result in a publication that reflects more thoroughly on how scientifically informed modes of enquiries may shift the kind of knowledge historians may acquire about the past.

“The Award shall initiate a debate bridging history, archaeology, and the sciences”, Hanß says. “This interdisciplinary debate shall connect early career researchers with leading experts, and it shall place curators, conservators, and technicians at the very heart of the academic discourses that we create about the early modern past. It is crucial that we connect the university with all its disciplines interested in material culture studies with both the museums and the laboratories in order to fully benefit from the resources and expertise that we have in Manchester—and beyond.”

Microscopic Records: The New Interdisciplinarity of Early Modern Studies, c. 1400–1800 will take place on 20–22 February 2020. For further information on this event, please consult this webpage or contact the organiser.

If you want to read more about Stefan Hanß and how his research explores new trajectories and tools in material culture studies such as the usage of digital microscopes, remaking experiments, and historians’ collaboration with artists and artisans, see Stefan’s webpage. His most recent journal articles on early modern material culture, featherwork and hair in particular, are published in The Historical Journal and in History Workshop Journal. Further information on the Affective Artefacts seminar series, which he co-organises together with Prof Sasha Handley, can be found here:

This blog entry was first published by History@Manchester [18 March 2019].

Swords in the Age of Shakespeare: Marc Gener-Moret on Archaeometallurgy and Microscopic Records of E...
Science at the Museum: An Interview with Paola Ricciardi
Masterclass Report I: Imaging Technologies