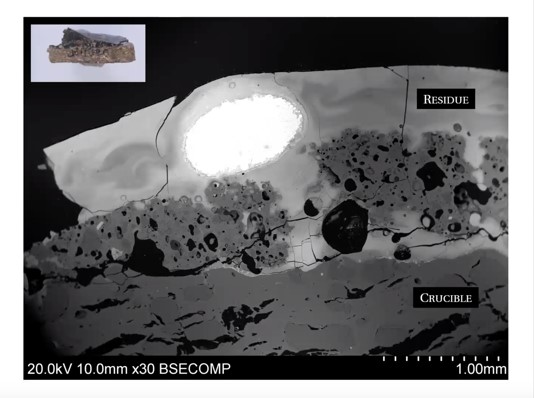 Masterclass Report VII: Archaeometallurgy, Alchemy, and the History of Science

This masterclass was delivered by Umberto Veronesi (University College London).

Archaeometallurgy is a well-established and innovative sub-discipline within archaeological sciences where it has been utilised to understand the production and use of metals in past-societies who have left behind little written record. In our seventh masterclass Umberto Veronesi discussed the multiple ways that archaeometallurgy can be incorporated into histories of early modern science, which have thus far relied on printed texts. In the years between 1450 and 1800 there was a relative boom in the human extraction of metal ore that required new ways of determining metal quality and composition. This led to largescale experimentation and developments in metallurgy and alchemy and worked to expand knowledge about the behaviour of metals. Archaeometry is, therefore, a powerful way of investigating early modern scientific technologies and alchemical practices.

This masterclass took its participants into the everyday work of early modern alchemical laboratories, glass workshops and metal-processing workplaces. What made this masterclass so exciting was its twofold design. To begin Veronesi gave an introduction into early modern metallurgical practices, namely fire assay (the quantitative determination of noble metals), through the scientific analysis of metallurgical tools such as cupels. Veronesi’s introductory slides enabled the audience to visualise the procedures described in three written extracts on how-to assay ore from an anonymous sixteenth-century metallurgical book read in preparation for the session (figures 1 & 2).1 Similarly the contemporary analytical equipment Veronesi mentioned was brought to life by watching Michael Charlton’s pre-circulated video tour of the Wolfson Archaeological Science Laboratory at University College London. In the second half of the masterclass Veronesi showed how archaeometallurgy has the potential to raise unexpected philosophical questions through five glass object case studies. Thinking about the value attributed to coloured glass prompted those attending the session to ask whether experiments in glass-making might have led to developments in how early moderns understood natural matter and the secrets of nature. 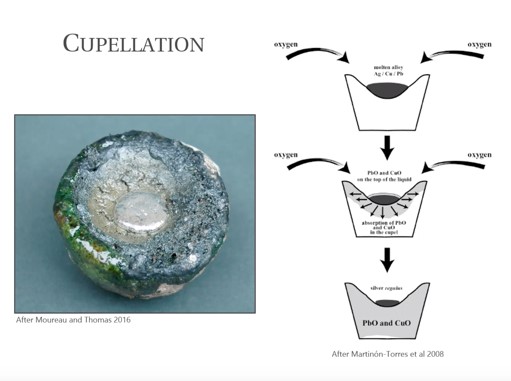 One particularly interesting object discussed was a waste crucible, recovered from the site of the Ashmolean Museum’s late seventeenth-century laboratory, that had been used for experimenting with the production of glass. The important role of glass technology is often overlooked in archaeometallurgy, but analysis of this crucible with a scanning electron microscope (SEM) revealed that the thick layer of blue glass lining its inner surface contained lead crystal. Lead crystal glass would have been extremely expensive in the early eighteenth century and it was usually reserved for decorative glassware. Why, Veronesi asked, do we find such evidence in a “philosophical” laboratory? Natural philosophers were evidently fascinated by the transformation of glass and sought to learn from the innovative processes involved in its production. Their involvement in such material practices raises further questions about the boundaries of scientific experimentation, the practitioners who were involved in forging technological innovation, and subsequently what is typically understood to fall within the purview of art, philosophy and science. Now that we know these glass experiments were being conducted at the Ashmolean, historians need to further interrogate the direction and flow of knowledge between its laboratory, Oxford University and the Royal Society, who were largely responsible for the codification of glass-making knowledge in England. In raising such historically important questions this masterclass left a great impression on historians of early modern science, social historians and cultural historians alike.

The masterclass also prompted broader debates about the fragmentary status of early modern material evidence and the role of “waste” in particular. While archaeologists are accustomed to interpreting offcuts and fragmentary remains, historians are just beginning to incorporate this valuable evidence into their research. On the other hand, historians’ knowledge may be crucial for contextualising such findings. This session showed that the early modern conception of waste was substantively different to our own, and thus the cultural significance of recycling is in itself a worthy topic for future research. One of the many things to be taken away from this masterclass is that this type of material evidence contains a wealth of information about social and cultural exchange, adaptation and exploitation as well as providing evidence of technological procedure. Archaeometry, specifically archaeometallurgy, could thus provide unique insights into cultural exchange along settlement frontiers. The ramifications of which might be potentially huge for global history and the history of early modern colonial America.

1 Sisco, A.G., Smith, C.S., Bergwerk- und Probierbüchlein: A Translation from the German of the Bergbüchlein, a 16th- Century Book on Mining Geology, by Anneliese Grünhaldt Sisco and Cyril Stanley Smith, and of the Probierbüchlein, a 16th- Century Work on Assaying, with Technical Annotations and Historical Notes (New York: The American Institute of Mining and Metallurgical Engineers, 1949).

Manchester historian selected as one of the 2019 British Academy ‘Rising Stars’
Writing History in the Time of COVID-19: Historian Timothy LeCain on the Third Warning, Microscopic ...
Renaissance Clothing and Craftspeople: Paula Hohti Erichsen on the Microscopic Records of Early Mode...
Tweets by OfficialUoM