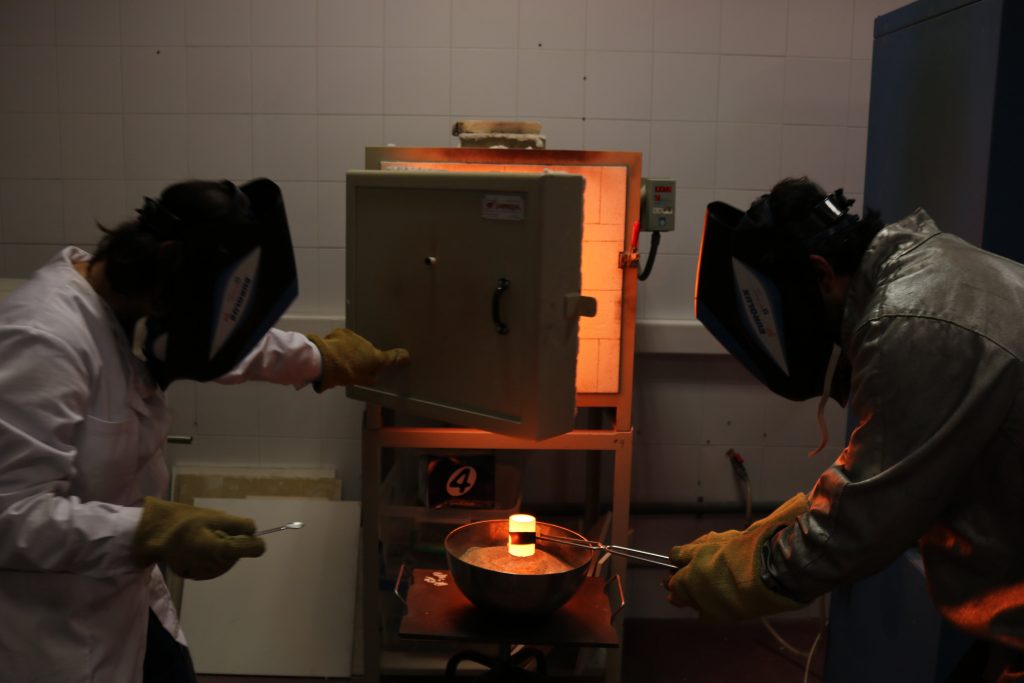 Stefan Hanß: Sven Dupré is Professor of History of Art, Science and Technology at Utrecht University and the University of Amsterdam. His research explores the role of materials and making in the early modern arts and sciences. He edited Laboratories of Art (Springer, 2014), a volume charting the historical interconnections between artisanal workshops and alchemical laboratories. In 2016, Sven Dupré co-edited Early Modern Color Worlds (Brill) which examines early modern practices, concepts, materials, and languages of colour. Discussing the relationship between artisanal cultures, concepts of ingenuity and artistic expertise, he edited Knowledge and Discernment in the Early Modern Arts (Routledge, 2017) together with Christine Göttler. Most recently, Sven Dupré published the volume Gems in the Early Modern World: Materials, Knowledge and Global Trade, 1450–1800 (together with Michael Bycroft, Palgrave Macmillan, 2019). He is the Scientific Director of the ARTECHNE project Technique in the Arts: Concepts, Practices, Expertise, 1500–1950, which is supported by a European Research Council Consolidator Grant. The project explores the significance of “technique”, understood as a textual, material, and social practice, in the theory and practice of the visual and decorative arts. Bridging the history of early modern arts, sciences, and technologies, Sven Dupré’s research sets the agenda for a making- and materials-focused history of early modern arts. He kindly accepted the invitation to contribute to this British Academy event blog on microscopic records.

The upcoming British Academy event Microscopic Records: The New Interdisciplinarity of Early Modern Studies, c.1400–1800 explores collaborations between the humanities and the sciences for writing the history of early modern small-scale materials. Art history has a rich tradition of such cross-disciplinary research, and you pioneered in such innovative enquiries in your research on early modern materials, sciences, technologies, and the arts. How do you envisage the possibilities and limits of future collaborations between the sciences and the humanities for research on early modern material cultures?

Sven Dupré: One of the most exciting aspects of the newest technologies applied in the study of art history and material culture is the mobility of its equipment (scientific investigation can take place in situ rather than requiring the movement of the object to the lab allowing the public as witnesses) and its imaging power at different scales. I hope that in the near future we can fully exploit this power in response to one of the major challenges of all those involved in research involving re-enactment, reconstruction or re-making, that is, the challenge of capturing, documenting, archiving and communicating the sensory and gestural knowledge to which we gain access by using our bodies as instruments of knowledge in such practices. Re-enactments involve a shift towards the experience of knowledge in the making, and let’s hope that the newest (digital) imaging technologies will facilitate access to this exciting experience.

SH: In the upcoming British Academy event, we will speak about imaging technologies as well as remaking experiments as an important part of a new cross-disciplinary history of early modern materials. You explore the role of making and remaking in ARTECHNE as well as in your earlier research on early modern colour recipes. What has been the most recent remaking experiments that you engaged with? And what is the significance of remaking in your broader research agenda?

SD: In the Artechne Project we have engaged with re-making of two sorts. First, we have designed ‘re-’practices in which we are primarily interested in skill and processes of learning in the arts. We are not just interested in skill—what it is and how it is acquired—but also in the role which texts of different genres such as recipes, instructions, manuals play in the historical processes of learning of arts and crafts. If we know that texts have played only a limited role in learning a trade within the context of master-apprentice relationships in the workshop and that learning by doing remained the standard, how could early modern people have used texts, complementary to learning by doing? We thus re-work recipes and instructions not only to reflect on the relation between texts and practice, but to gain insight in what artisans do with texts. We have designed our ‘re-’practice, especially the social environment in which we have placed the historian’s body, adopting elements of the ethnographic experiment.

One of our re-enactments was focused on learning the craft of silver-smiths, in which Thijs Hagendijk, PhD student and novice, apprenticed with metal conservator and gold and silversmith Tonny Beentjes. Re-enacting the socio-material environment of learning a craft, we have placed a novice apprentice in a conservation studio with tools and equipment, together with a master craftsman and in the presence of a historical manual. Reflecting on Thijs the apprentice’s learning process and Tonny the master’s pedagogy, re-enactments help to gain insights in the role of texts in the process of learning in the arts, now and back in the early modern period. Our primary textual source was the early eighteenth-century guidebook by the Dutch silversmith Willem Van Laer. Re-working Van Laer’s instructions, guided by the master, Thijs acquired access to sensory and gestural knowledge, which is absent or sometimes just invisible at first reading in the historical text, and also gained insight in why Van Laer wrote down his craft experience in the ways he did in his manual.

Re-working recipes, as a method of historical inquiry, also has particular strengths which are key to understanding early modern color worlds in line with some of my previous work. Re-working recipes allows us to see variability as a key characteristic of early modern color worlds. In one instance, in a collaboration involving the artist Claudy Jongstra and Artechne postdoc Jenny Boulboullé, we explored and revived Burgundian black colour technologies for the exhibition Back to Black at the Museum Hof van Busleyden, a museum for Burgundian culture, in Mechelen. The historical background to this exhibition consists of the Burgundian court playing a key role in making black clothes fashionable, and Flemish master dyers perfecting the art of dyeing deeply dark and intense tones of black in the Burgundian-Habsburg Netherlands. In another instance, in a project with Marcia Vilarigues, head of the Vicarte laboratories at the NOVA University in Lisbon, and Thijs Hagendijk, we have re-worked recipes for the making of rosichiero (transparant red) glass on the basis of a group of seventeenth-century texts on the art of glass, soon to be published in an article in Ambix.

SH: In your most recent research on remaking, you advocate for historians to move outside the laboratory. Can you elaborate a bit more on both the chances and challenges of laboratory work for historical research?

SD: In these two most recent projects (on Burgundian black and rosichiero) we have indeed found it necessary to move the re-working of recipes to spaces outside the laboratory. Originally, we took up our work at the Atelier Building, where the University of Amsterdam, the Rijksmuseum and the Cultural Heritage Agency of the Netherlands gathers its expertise in the conservation and preservation of art objects. The Atelier Building hosts modern state-of-the-art conservation studios and laboratories, which are very different from the historical workshop environments in which we as a historical object of study are interested. For example, temperature control is very different in early modern furnaces from a modern lab, and such differences are important in estimating the authenticity of the reconstruction and the historical accuracy of the reproduction. We moved our reproductions of rosichiero glass to two spaces outside the laboratory, first to Telheiro da Encosta do Castelo, an artists’ space in Montemor-o-Novo in Portugal, and later to Villa Borg, a reconstructed Roman villa in Germany, which is turned in to an experimental archaeology site during the Glass Furnace Experiment. We moved to these sites attracted by the various wood-fired furnaces to which we would have access, and to further our understanding of fire technologies.

One of the two electric kilns at the VICARTE glass studios in Lisbon (Portugal). Photo: ARTECHNE/VICARTE. 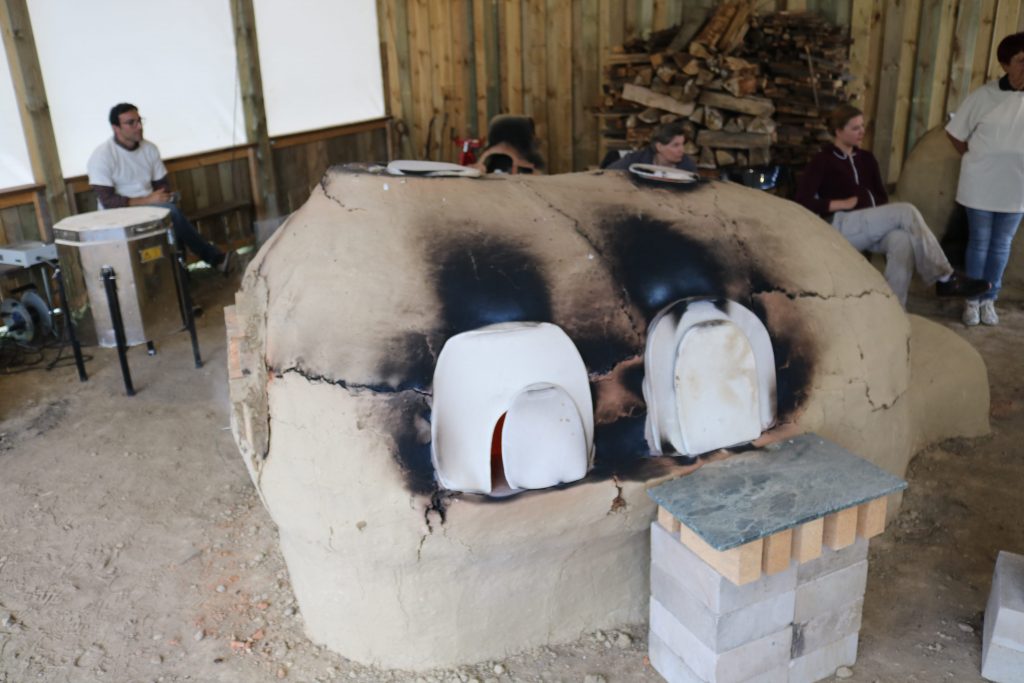 The wood-fired furnace at Villa Borg (Germany). The furnace is a reconstructed Roman glass furnace and is very similar to a reverberatory furnace. Photo: ARTECHNE/VICARTE.

SD: One can wonder if the laboratory environment is not more fundamentally important to the production of historical knowledge through ‘re-’practices. Historians of science have gone through great efforts in the past half a century to bring out precisely that site matters and that scientific knowledge is shaped and legitimized by its place of production. I would suggest to self-reflectively turn this insight on to our own practices of reconstruction in the laboratory, and consider in which ways the laboratory matters to us as a place of knowledge production, and what it does to the knowledge that we produce once we as historians move outside the laboratory. The historical knowledge of Burgundian black color technologies was also created in a participatory space, the studio of Claudy Jongstra set in rural Friesland, allowing us to profit from the local ecology of dyestuffs grown in Jongstra’s garden and the dyeing expertise of Jongstra and her team. While it is well-known that ‘re-’research brings out the importance of the historicity of the materials, I want to emphasize the significance of the environments, spaces and ecologies in which we perform this research, if we want to gain access to the gestural and sensory knowledge invested in historical processes of color production.

The environment in the ethnographic experiment exploring the role of a manual in historical apprenticeships, was a state-of-the-art metal conservation studio in the Atelier Building in Amsterdam which in its material dimensions—the materials and tools, the fire and air circulation technologies, and lay-out of the space—is different from the eighteenth-century gold and silversmithing workshop in which Van Laer worked. In consequent re-enactments we have moved—following in the footsteps of experimental archaeologists—‘in the field’, or in open-air spaces with a different range of materials, other technologies and less control upon the environment, which indeed might be closer to the material conditions under which processes of making have been achieved in the past, as experimental archaeologists claim. More fundamentally, if we think of skills and their acquisition in dialogue with these socio-material environments, it is important to re-think and accordingly materially shape the spaces in which we undertake our re-enactments. It is equally important to keep in mind that these socio-material environments ‘in the field’ are still and by necessity different from early modern workshops. The artist-philosopher Erik Rietveld has explored ideas of skills in The End of Sitting, a site-specific installation allowing bodies to interact with material structures while exploring what kind of affordances for supporting standing people enjoyed. Rietveld conceives of such installations as ‘material playgrounds’, and thinking of these socio-material environments in terms of playgrounds is also useful for reconstruction research because the element of play emphasizes the difference and interconnectedness of the past and the present, while play is also considered serious, and a key element in pedagogies.

We have arrived at a crucial moment in the history of ‘re-’research. Creating a common genealogy across the various disciplines, as we witness at the moment (see our forthcoming book Reconstruction Replication and Re-enactment in the Humanities and Social Sciences), is an important step towards the formation of a field of study, which will also make it possible to enrich the design of ‘re-’methods by interdisciplinary cross-fertilization. However, to make this field sustainable as being productive of historical knowledge, we will also need to develop an epistemology of ‘re-’practices; and the ways in which we conceptualize and socio-materially scaffold the spaces in which we perform ‘re-’practices are key to such a theory of how ‘re-’practices produce historical knowledge. Let’s think of these spaces as material playgrounds in which experts of various kinds—makers, artists, historians, and conservators—are responding to the affordances of these spaces, co-creating historical knowledge.

Early Modern Microscopic Records: Experiencing Material and Visual Cultures
Writing History in the Time of COVID-19: Historian Timothy LeCain on the Third Warning, Microscopic ...
“Within a Chain of Lifeforms”: Sujit Sivasundaram on Interspecies Frontiers, Microscopic Records, an...
Tweets by OfficialUoM