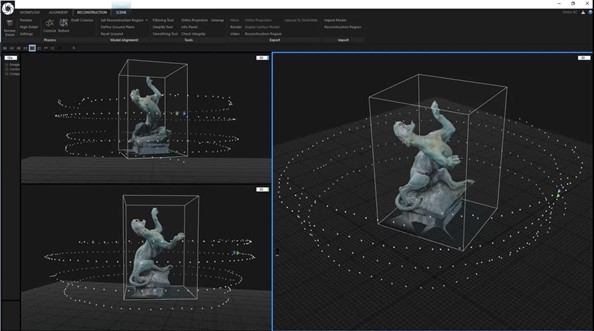 This masterclass was delivered by Dr Luca Scholz (The University of Manchester).

The fifth masterclass, led by Dr Luca Scholz, prompted interesting discussions about the nature of human interaction with the material world, through a practical demonstration on how to generate 3D models from photographs of artefacts, buildings and people in the photogrammetry software Agisoft Metashape. These debates underscored the huge role that 3D modelling could play in capturing and conveying interactive experience in different epistemic spaces including museums, archives and seminar rooms as well as highlighting the potential pitfalls of applying this software to historical objects and contexts.

Photogrammetry has typically been used by architects, archaeologists and conservators to generate elevation plans for partially damaged extant buildings and to reconstruct sculptures, statues and largescale archaeological sites such as submerged shipwrecks.1 It also allows curators to accurately record, measure and present particularly small or vulnerable objects in museum collections. Many of these applications frame photogrammetry as a way of creating and preserving a copy of something that might be or has been lost. Debates concerning the authenticity of replicas and authentic experience are, therefore, implicit within the application of photogrammetry in the humanities and sciences. In light of the preceding masterclass on the digital recreation of an early modern doublet, this masterclass demonstration posed a series of further questions about the role of 3D imaging software within a museum environment. How, for example, do curators present 3D models to the public whilst retaining some sense of the original’s specific historical context and perception? Is the replica always of secondary importance to the object that it represents? Or does the 3D replica pose a threat to the authority, preservation and continued presence of the original object in collections? Does photogrammetry software have a long shelf life? How are models updated without loss of data? Who has ownership of the rights and use of 3D replicas? The questions that arose throughout the course of Microscopic Records’ fifth masterclass emphasised that if photogrammetry is to prevail and benefit the arts and heritage sector there must be greater collaboration between conservators, curators, historians and software companies in its design and use. 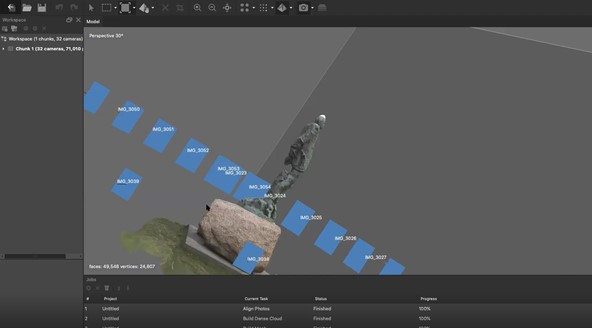 Historians who attended this masterclass suggested multiple ways that they could incorporate photogrammetry into their research and teaching, despite the general consensus that 3D replicas cannot fully capture and convey the historically specific and subjective sensorial stimulation of first-hand engagement with an object or space. 3D models could be generated in order to recall and re-engage with an object or room after the researcher has left that collection or specific location. New details, not seen on first examination, might become obvious when panning through and zooming in on its surfaces in the software, which would be particularly useful for objects that cannot be easily handled. By sampling Agisoft Metashape and producing their own 3D model of a statue (figures 1–2), participants in this masterclass quickly realised that photogrammetry is an accessible science for non-specialist researchers to adopt and adapt in their own research. This activity served to provide early career researchers and experienced academics alike with initial training in photogrammetry software. It also showed how, with very little financial investment and further training, it would be possible to make remote materials and environments accessible to students in the seminar room, and thus inspire a new generation of material culture specialists while teaching innovative research practices in the process.

“A New Visible World”: Philosopher Catherine Wilson on Early Modern Microscopic Records, the Senses,...
The Difficulties of Communicating What You Do (Not) See: Pamela Mackenzie on Early Modern Plants, Mi...
Masterclass Report II: The Scientific Analysis of Illuminated Manuscripts and Early Modern Miniature...

New Collaborations between History and the Sciences: Historian John R. McNeill on the Future of Hist...
Renaissance Clothing and Craftspeople: Paula Hohti Erichsen on the Microscopic Records of Early Mode...
Reconstructing the Minute Material World of Early Modern Textiles: Maarit Kalmakurki on Clothing and...
Tweets by OfficialUoM