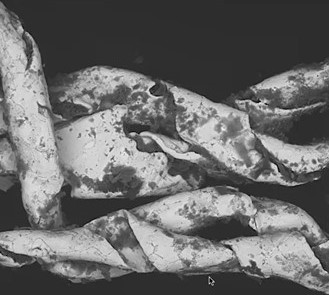 This masterclass report has been written by Vendy Hoppe (The University of Manchester).

Dr Margarita Gleba, an archaeologist specialising in textiles and other organic materials, introduced the participants of this British Academy Event to Scanning Electron Microscopy (SEM) of textile fibres during the third masterclass. SEM is a valuable technology which can uncover important information about material samples including textiles, such as raw ingredients used in their production. By scanning the sample with a focused beam of electrons which interact with the sample’s atoms, SEM produces greyscale images of the sample’s surface. These fifteen to 10,000 times magnified high-resolution images then allow for a detailed analysis of the sample’s surface features, shape, size, elements and compounds as well as arrangement of its atoms. The pre-circulated introductory lecture thus presented the main features and types of SEM, collection and preparation of samples and discussed the appearance of both plant (eg cotton and flax) and animal (eg sheep wool and silk) fibres in SEM.

The masterclass then proceeded with a sample analysis of ten textile fragments recovered from various areas, periods and contexts. Gleba guided the participants through examples of textiles ranging from first century CE North-Italian burial linens preserved in bronze, sheep wool preserved in mineralised iron from first century CE North Italy both in positive and negative casts to charred sheep wool from fifth century BCE Iberian Peninsula. The high-resolution images make visible even minute details that show whether a particular sample is made from wool that has been combed, therefore evidencing complex manipulation of the fibres during their preparation for weaving (Fig. 1). The samples also included mixed fibres: the remains of a second century BCE South Italian gold thread with a rotted away animal fibre core, but the twisted metal strip still intact (Fig. 2), as well as a seventeenth-century textile made with the combination of sheep wool and sea silk fibres. Sharing the process of SEM textile analysis, the masterclass was also an invaluable training session for those attending, especially many ECRs who were present. 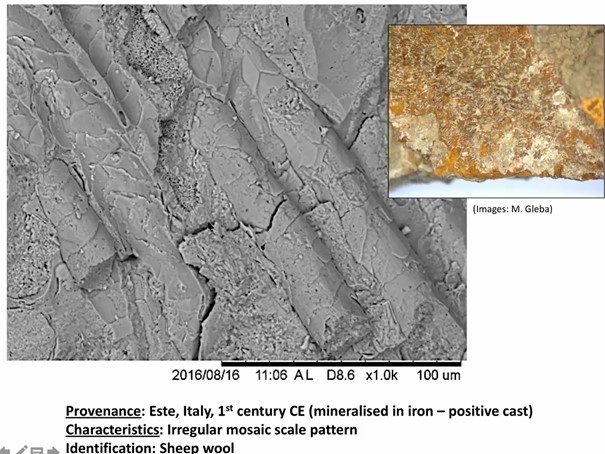 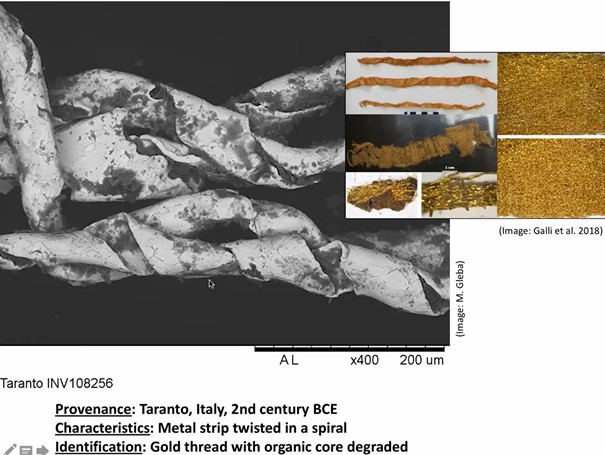 Gleba’s examination highlighted the many advantages of using SEM for fibre analysis. The images of the sample’s surfaces reveal a number of characteristics which help identifying the sources and even species of the fibres. For example, the longitudinal view of fibres exposes the ribbon-like shape of cotton or nodes characteristic of plan fibres such as flax. Sheep wool can be recognised by scales on its surface, which can often be visible even on mineralised negative casts after the fibres themselves have decomposed. The fibres can also be identified by looking at their cross-sections as each have their distinct shape, from triangular silk to round wool. Crucially, SEM textile analysis can allow us to track and analyse the quality of wool over time. The measurement of diameters of wool samples has been used to map selective breeding of sheep over millennia and thus effectively showcases human interaction with natural resources and the development of the wool industry. From a conservation perspective, SEM analysis is viable for a range of textiles as even very small samples of around one millimetre suffice for SEM study. When samples are taken from different parts of the fabric, the analysis can yield complex information about the textile as a whole. These samples can be taken from loose threads or those collected during cleaning or other procedures.

Gleba authoritatively showed the value and further potential of SEM for textile analysis, especially when complimented by further historical context, geographical information, and contextual knowledge about the type of textile and the setting of its excavation. SEM textile analysis can thus lead to identification of the fibres and their provenance. It helps dating historical material and revealing details of their production. Moreover, such information can then steer conservation strategies. Concluding in a lively discussion of the various uses of the data collected thanks to SEM in historical research, this masterclass showcased the merits and need for interdisciplinary approaches to research.

Vendy Hoppe, The University of Manchester.