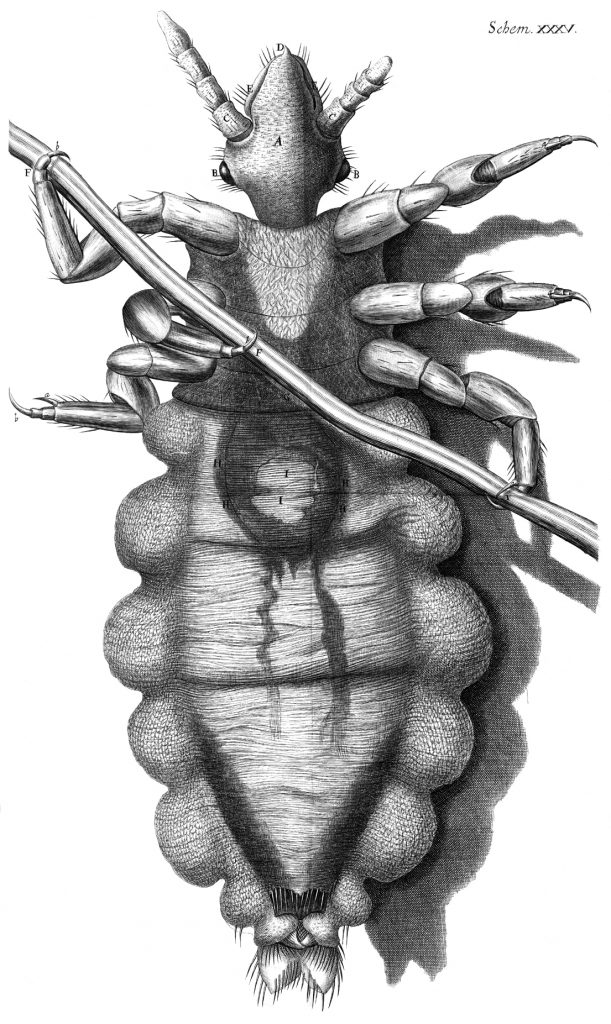 Stefan Hanß: The upcoming British Academy event Microscopic Records: The New Interdisciplinarity of Early Modern Studies, c.1400–1800 explores the often hardly visible and surprisingly agentive worlds of small materialities. What can early modern objects’ microscopic records tell us about the past life of such artefacts? Can scientific and microscopic analysis of early modern artefacts reveal how such things have been made, used, and perceived? At the same time, this British Academy event also explores the role of microscopic records in the early modern period. Catherine Wilson, formerly Anniversary Professor of Philosophy at the University of York and author of the widely acclaimed monograph The Invisible World: Early Modern Philosophy and the Invention of the Microscope (Princeton University Press, 1995, fig. 1), replied to some questions about the early modern experience and notion of microscopic environments. 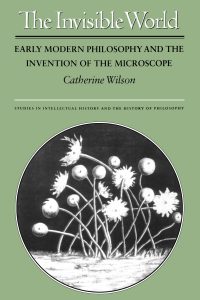 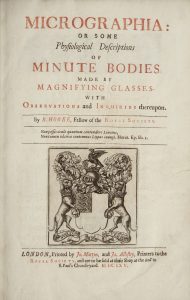 Fig. 2: Title page of Robert Hooke’s Micrographia: or some Physiological Descriptions of Minute Bodies made by Magnifying Glasses with Observations and Inquiries thereupon (London, 1665). Image credit: wikimedia (image by the National Library of Wales), https://commons.wikimedia.org/wiki/File:Micrographia_title_page.gif (access 26 May 2020).

SH: The development of microscopes in the early seventeenth century and their subsequent widespread use resulted in the discovery of previously unseen worlds of subvisibilia: hidden surfaces and compositions of animals, plants, and materiality; irritating details of things’ outer appearances and surfaces; and hidden material forces at work in nature. ‘By the help of Microscopes,’ Robert Hooke wrote in his Micrographia in 1665, one of the earliest treatises on microscopy, ‘there is nothing to small, as to escape our inquiry; hence there is a new visible World discovered to the understanding.’ This new world, however, also was a profound epistemic shock. You described Robert Hooke’s preface as ‘a rhetorical plea to abandon words for things’.¹ However, this also involved the search for a new vocabulary of how to describe things and a new grammar with which to express knowledge about and articulate questions directed at strikingly complex material worlds. The microscope prompted early modern protagonists to see and to describe materiality in new ways. Did microscopic records also prompt seventeenth-century Europeans to think things in new ways?

Catherine Wilson: This rethinking was indeed the topic of my 1995 book The Invisible World and some of the papers that followed. Like Copernicus’s and Galileo’s reconfiguration and redescription of the macro-universe, the microscope had a basically bimodal effect in a culture in which education was dominated by theologians and science was always enclosed in a theological—or anti-theological—framework. The microscope’s revelations of the ubiquity, strangeness, and beauty of living forms—especially their symmetry and geometry—suggested that Nature itself had incredible productive powers, and that there were many things on earth that had not been created for human purposes. After all, it was hard to credit God with designing and manufacturing every snowflake. Or the incredible workmanship of God and His desire to please us with beauty and variety could be the lesson extracted. These two views compete in seventeenth- and eighteenth-century philosophy. The fact that the human senses were not calibrated to this realm where so much was going on was at once humbling and a testimony to human enterprise and competency in gaining visual access to this new world.

On a scientific level, even though the microscope did not immediately pay off in terms of understanding health and disease, or realising the age old dreams of alchemical transmutation and the manufacture of medicines, it was now clear that the ‘secret springs’ of natural processes were located at the subvisible level. This message spread rapidly, and it was far easier to grasp through the medium of print, with its embellishments and neighbouring descriptions, and of course reproducibility, than with the instrument itself, which required access, technique, and lots of practice.

SH: Hands and eyes, vision and touch, are recurrent topics in seventeenth-century theories of microscopy. What was the impact of microscopes on early modern understandings of the sensorialities of things and the senses of human beings in general?

CW: There were feats of artistry—largely performed by human beings with myopia—before the invention of the microscope, but the exquisite detail you see in Elizabethan painting depended on the use of lenses to place the tiny brushstrokes needed to capture the textures of fur, glass, satin and other luxury materials. I suspect the paintings contained elements of enhancement and exaggeration, because the human optical system responds powerfully to texture, as well as to light and colour. Aesthetics in the modern sense is an invention of the eighteenth century, and the cultivation of ‘taste’ becomes a kind of moral, or para-moral virtue. The common elements of symmetry, geometrical regularity, and repeated patterns, in textiles, jewellery-making, the decorative arts, and garden design antedate the discovery of the geometry of nature in crystals, snowflakes, plant parts, and the bodies of insects and provide a vocabulary for describing them.

Philosophy had long experienced moral anxiety over the human-animal divide (mammals were unnervingly emotional, dirty, and sexy) and over the dangers of distraction when one should be turning away from the glittering surfaces of the world and introspecting on one’s sins. Because microscopy allowed for engagement and sensory enjoyment without getting into the danger zones of hedonism and libertinism—and because insects, not mammals, were frequent objects of study—‘curiosity’ changed its valence from negative to positive. The descriptions of the microworld are very often couched in terms of human luxury artistry—gems, lace, weaponry, etc. validating both realms. Microscopy seemed to offer innocent pleasures, and the ‘spectacle of nature’ became a legitimate object of study. It was high praise to call the object ‘curiously wrought’, and the explorer and discoverer of these novelties was credited at the same time.

SH: It is striking that current thing theory often refers to early modern traditions of philosophical thought, esp. to the seventeenth-century Dutch philosopher Baruch Spinoza. Could this be related to shifting early modern understandings of things in response to the discovery of microscopes? What makes these early modern philosophers, who were deeply embedded in a world that reconsidered traditional approaches to the senses and materiality, so attractive for philosophical approaches to things today?

CW: Spinoza is much favoured in ‘new materialism’ circles, even though Spinoza scholars scratch their heads at the suggestion that Spinoza was any kind of materialist, or supportive of sensual or sensory engagement with things. He is very abstract, apart from his recommendation to enjoy ‘acting, living, and preserving our being’ and to surround oneself with green plants, and he was not one of the most active user of magnifying lenses of his period. There is a long-standing confusion between Epicureanism and Spinozism for which modern commentators aren’t entirely to blame because the eighteenth-century writers sometimes amalgamated them too.

The reason Spinoza is admired is that he knocks down mind-body dualism and to some extent the human-animal divide. I would argue that if you look aside from Descartes’s pointedly artificial and strategic dualism, his engagement with the material world, especially the microworld, his claims for self-organisation in matter, and his interest in mathematics and human artistry is deeper and more historically significant than Spinoza’s. I would also emphasize the sensuality of Locke, who despite his scepticism about the utility of microscopy, really follows through on his claim that the senses are the basis of knowledge. He was obviously a discerning person, and he makes many references in his Essay to tastes, scents, colours, and sounds—to pineapples, violets, scarlet, a trumpet—and to children’s exploration and discovery of the world around them. It is an exciting development in current scholarship that we can go back and reread these philosophers not just in terms of their arguments about the metaphysics of the invisibles—God, the immortal soul, the morally right—but in terms of their attitudes towards and theories of visible nature.

SH: What could we gain from conceptualising early modern microscopical enquiries with thing theory? For example, it has been emphasized that the thingness of things is often only revealed once a tool stops functioning as such. A prominent example is Heidegger’s discussion of the hammer which, as Julian Thomas puts it, ‘recedes into the task’ whilst being used as a hammer and which only ‘reveals itself as an object that needs to be interrogated in some fashion’ when it stops working as a tool.² What happened when early modern microscopes did not work? Can we think of early modern microscopy as dynamic human-thing and thing-thing interactions? If so, what has been the broader role of visual representations as ‘epistemic images’ (Lorraine Daston)?

CW: The early microscope was definitely not a very good tool when it came to the ambition to be a master and possessor of nature by understanding and intervening in microprocesses. It seemed to many to offer only what Berkeley called ‘the empty amusement of seeing,’ a wealth of beautiful and intriguing details but no real clues as to the dynamics of vital or chemical processes, not to mention the mysteries of electricity, magnetism, the action of drugs.

But to your question, the famous louse of the Micrographia that appears ‘the size of a lobster’ is a good example (fig. 3). Its workaday role, as a pest you can hardly see that makes you itch, recedes into the distance, and instead you have—many times life size—the elaborately armoured creature of the fold out illustration, that arouses a mixture of horror and admiration—and all those philosophical thoughts about origins I mentioned earlier.

Fig. 3: Robert Hooke, Micrographia: or some Physiological Descriptions of Minute Bodies made by Magnifying Glasses with Observations and Inquiries thereupon (London, 1665), Schem. XXXV, Of a Louse.  Image credit: wikimedia (image by the National Library of Wales), https://commons.wikimedia.org/wiki/File:Louse_diagram,_Micrographia,_Robert_Hooke,_1667.jpg (access 26 May 2020).

CW: A contrasting example is our new virus (fig. 4). In its workaday role, it is a destructive little speck floating through the air or sticking on door handles that everyone is terrified of inhaling or swallowing. In the new official illustration, it’s an impressively complex object that looks about the size of a tennis ball, and that evokes the same mixture of wonder and horror as the louse. It definitely needs to be interrogated, though the picture gives no real clues as to its mode of operation. What we are looking at, though, is not just an enhanced image, but a creative work of art –and there are many versions in different colour schemes (fig. 5). The corona virus is 120 nanometers in diameter, and its details are far smaller. It lies below the optical limit of about 200 nanometers, so, technically, the virus doesn’t look like anything. The images produced (not seen!) with an electron microscope show flat, rather irregular spiked blobs in greyscale. The striking red-orange-grey colour scheme was chosen by its portrait designers to create an effect, and its shape required sophisticated computers to construct. We can expect many more of these brilliantly coloured, computer-generated images of the macro-universe and the microworld, but they have less and less to do with ordinary vision. 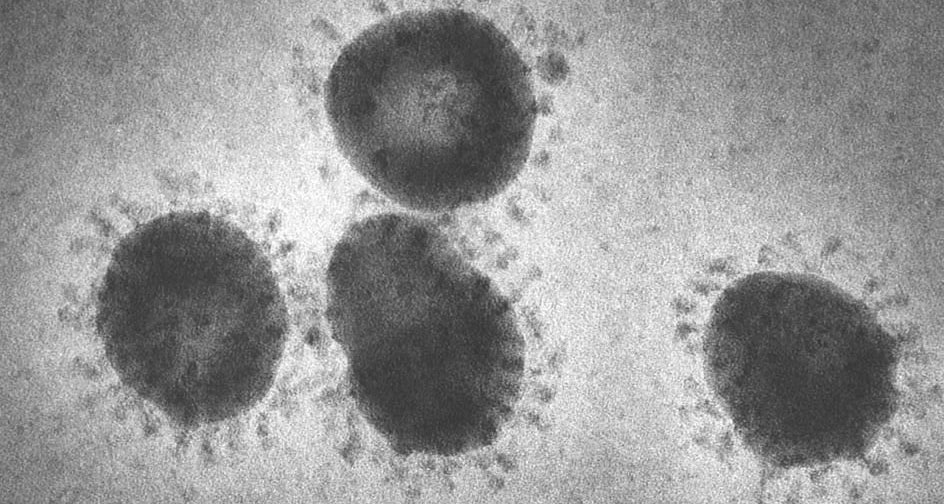 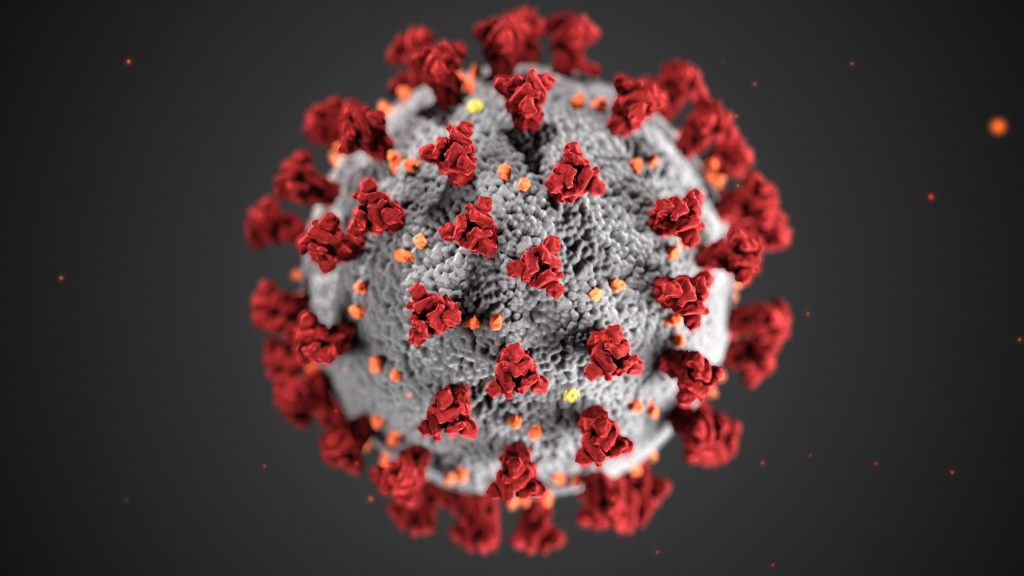 ² For a recent discussion, see Julian Thomas, ‘Insignificance: On the Unobtrusiveness of Material Things,’ Cambridge Archaeological Journal 30, no. 1 (2020): 150.

Catherine Wilson, The University of York

The Difficulties of Communicating What You Do (Not) See: Pamela Mackenzie on Early Modern Plants, Mi...
Making Colours, Sensing Microscopic Records: Jessie Wei-Hsuan Chen on Senses and Skills in Historica...
Funding for Scientific Research on Early Modern German Haircare Recipes
Tweets by OfficialUoM