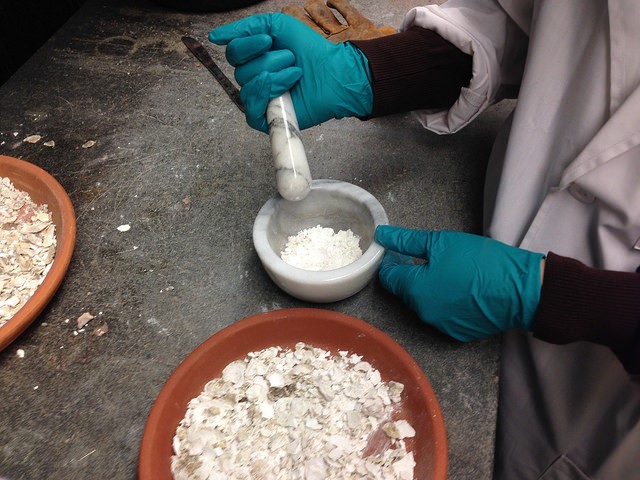 Pamela H. Smith on the Significance of Microscopic Records for Renaissance How-To Knowledge

Stefan Hanß: The research of Pamela H. Smith, Seth Low Professor of History and Director of the Center for Science and Society at Columbia University, inspires early modern historians all around the globe. She published widely on early modern alchemy, crafts, and materiality, and is the founding director of The Making and Knowing Project. Since 2014, members of the team explore the intersections of early modern crafts and sciences in a late sixteenth-century French manuscript containing around 930 entries on artistic and technical “recipes”; detailed how-to instructions, many of which were tried out, experimented with, and annotated by what you called an “author-practitioner”. Could you spell out, briefly, what you mean by this term?

Pamela H. Smith: Sometime after 1579, an anonymous individual began recording techniques for many different processes we would now classify as belonging to the fine arts, crafts, and various technologies (of warfare, for example). This person filled 170 folios (or 340 single pages) with closely written text and some hand-drawn figures containing recipes, instructions, fragmentary notes, firsthand accounts of trials with many materials and techniques, and observations on a multitude of different topics, including drawing instruction, pigment application, dyeing, coloring of metal, wax, and wood, imitation gem production, making molds and metal casts, arms and armor, plant and tree cultivation, preservation of animals, plants, and foodstuffs, distillation of turpentine, and much else. In many cases, his observations and his firsthand experiments with different techniques are the only written sources we have that document pre-modern techniques, for example, of the furbisher who assembled swords, and for the casting of medals now called “incuse reverse”. As such, it is a rich and unique example of a “how-to” text—a body of literature whose significance is widely acknowledged, but, until recently, was under-studied. Like Leonardo da Vinci’s notebooks, this extraordinary manuscript gives an invaluable firsthand view by a practitioner-aspiring-to-be-an-author (hence “author-practitioner”) into the continuous experimentation through which objects were created by skilled laboring bodies, and how the process of artistic creation yielded insights into the workings of nature—what you’ve called “microscopic records”.

SH: How did this sixteenth-century author-practitioner encounter such microscopic records, thus, the hidden, often invisible, and mostly unseen miniature components that are a fundamental and creative part of material environments in his work in the “boutique” (workshop)?

PHS: Let me give you an example, drawn from his many experiments with what he calls sand (sable), that made up the dry component of the molding material for the technique that is today called “sand casting” or “frame casting”. The search for “excellent” molding sand preoccupied not only the author-practitioner of Ms. Fr. 640, but many early modern craftspeople whose technical writings have come down to us. The author-practitioner experiments with all kinds of materials—alabaster, wheat flour, felt from hats, pine wood, ox bone, cuttlefish bone; I could go on and on. He calcined (burned to an ash) these materials, which he ground finely, then combined them with a liquid mixture (sometimes called “magistra”) that ran the gamut from egg whites, to wine boiled with elm root, to rock salt kept in a damp place for a night (to give just three out of myriad examples). 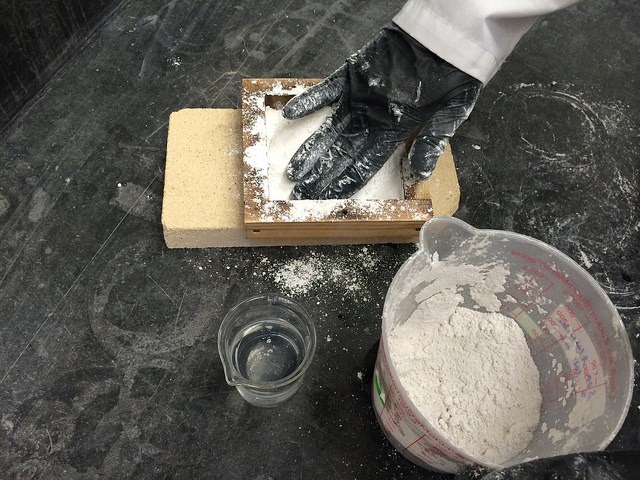 PHS: These mold materials were of equal and deep experimental, intellectual, and utilitarian interest to founders and metalworkers. The author-practitioner’s many trials reveal the knowledge-making process of the craftsperson seeking effective materials for productive processes. His extensive trials were necessary to form hypotheses about what materials might be effective and which should be “tried” or “assayed” in the next trial. These trials enabled him to form taxonomies of likely materials classified by their appearance, qualities, and use, in order, finally, to be able to define the properties necessary to an “excellent” molding sand. For more on the intellectual and experimental process of making sands for molding, see Sofia Gans, “Excellent Sand from Alabaster,” Secrets of Craft and Nature, https://edition640.makingandknowing.org/#/essays/ann_016_sp_15; Yijun Wang and Pamela H. Smith, “Fat, Lean, Sweet, Sour: Sand of Ox Bone and Rock Salt,” Secrets of Craft and Nature, https://edition640.makingandknowing.org/#/essays/ann_012_fa_14; and Caroline Marris and Stephanie Pope, “Sand Molds of Ox Bone, Wine, and Elm Root,” Secrets of Craft and Nature, https://edition640.makingandknowing.org/#/essays/ann_020_sp_15. Naturally, the molds made for casting have rarely survived (like so many intermediary tools) thus reconstructions are one of the few ways to shed light, not only on processes of molding, but also on the knowledge-making process that went on in the workshop. 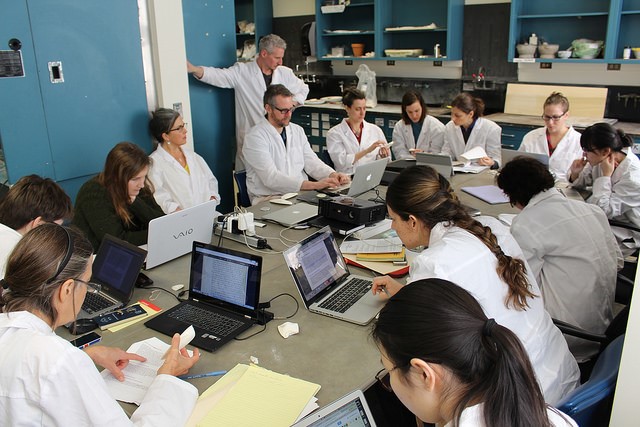 Graduate lab seminar to research and reconstruct recipes in the manuscript. Image credit: The Making and Knowing Project.

SH: Your research shows the crucial role of experimentation and observation in early modern workshops of artists and artisans. You have convincingly argued that making must be considered an “epistemic activity” and “a form of knowing” itself.1 Building on this, could the author-practitioner’s making, at least in parts, also be interpreted as a method of investigating microscopic records, exploring and managing the characteristics, uncertainties, and agentive qualities of the miniature-scale materiality of nature? Also the manuscript’s annotations, which hint at the processual character of these written instructions, could point towards such an interpretation.

PHS: The short answer is “yes”! You’ve put it beautifully. I would argue that most (perhaps all) workshop processes are about “exploring and managing the characteristics, uncertainties, and agentive qualities” of natural materials. The many accounts of these processes written down by diverse artisans, including the anonymous author-practitioner of Ms. Fr. 640, all, to a lesser or greater degree, attempt to convey this exploration of and struggle with materials. Ms. Fr. 640 contains much firsthand testimony in its “recipes” and densely written marginal notes about this mode of making natural knowledge. Our students engaged in hands-on research in the Making and Knowing Laboratory (in conjunction with research in relevant texts) to attempt reconstructions of hundreds of the techniques and processes recorded by the author-practitioner. These students, overwhelmingly from the humanities and social sciences, underwent their own struggle to do this, sometimes, very interestingly, appearing to follow in the footsteps of the author-practitioner (see, for example, Kathryn Kremnitzer and Pamela H. Smith, “Imitation Rubies and Failure,” Secrets of Craft and Nature, https://edition640.makingandknowing.org/#/essays/ann_082_fa_15, and Shiye Fu, Zhiqi Zhang, and Pamela H. Smith. “Molding Grasshoppers and Things Too Thin,” Secrets of Craft and Nature, https://edition640.makingandknowing.org/#/essays/ann_013_sp_15). The student essays beautifully illuminate the techniques, historical context, and even identity of the author-practitioner, as well as noting their own processes of learning and growth through their exposure to hands-on historical research. 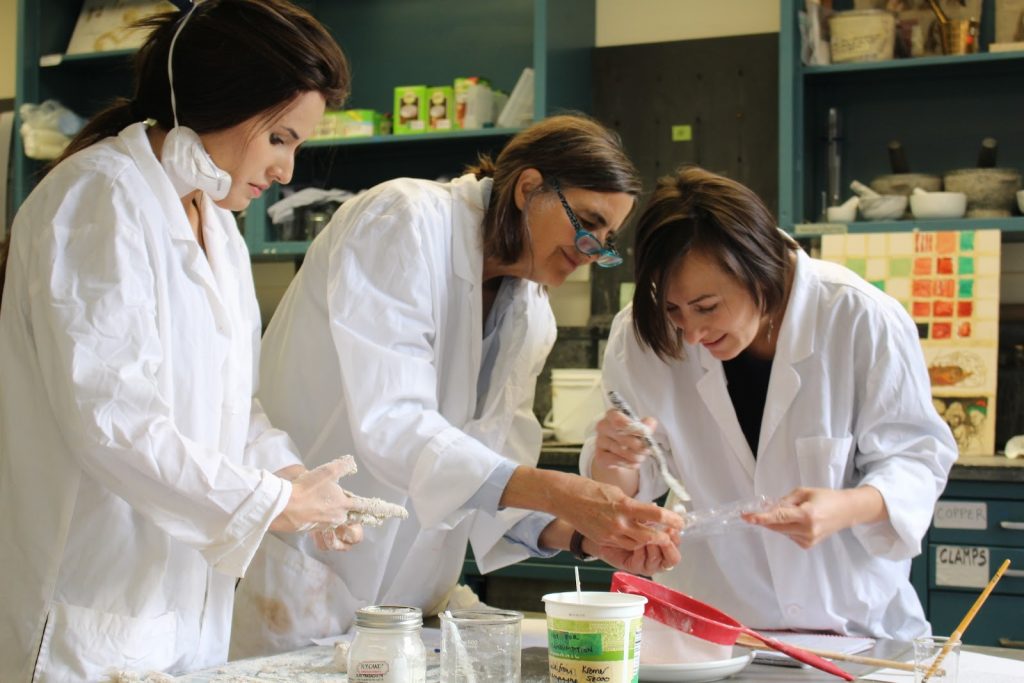 SH: The Making and Knowing Project is located at the Center for Science and Society at Columbia University, where you and your team engaged in experiments and laboratory work. By doing so, you have pioneered historical research that challenges and traverses the widely established divide between the sciences and humanities. Since this is also one of the goals of the upcoming British Academy event Microscopic Records: The New Interdisciplinarity of Early Modern Sciences, c. 1400–1800, I would be interested in your personal experience of working with material cultures across the traditional divide of the humanities and the sciences. How did you experience encountering microscopic records in your own studio practice?

PHS: After publishing The Body of the Artisan (University of Chicago Press, 2004), I began research for a quick book on how-to texts 1400–1800. Hah! Ms. Fr. 640 was simply going to be one of those texts, and I was going to use it for evidence about lifecasting techniques. As I read, however, I realized I could not really understand most of these texts (and especially Ms. Fr. 640 because it is so non-linear) simply by reading them. Instead, I needed to understand the knowledge contained in them, which I could not do except by understanding the processes. The quickest way to acquire such an understanding is to learn through doing, and that’s what I’ve been doing ever since. I have learned by taking historical courses of making, in conversations with many practitioners, conservators, and technical art historians, in bringing expert practitioners into the Making and Knowing Lab, and learning hugely from the Making and Knowing students’ research. You could say that the last many years of my life have been consumed with the proverbial scholarly note. But what a rich note it turned out to be! It taught us all so much more than simply about techniques and materials, but also about collaborative research, pedagogy, early modern history, including daily life, “microscopic records,” and, of course, about how-to texts and their role in the so-called scientific revolution. Now that the Secrets of Craft and Nature in Renaissance France is coming in on the home stretch, I am finally getting back to that “quick” book on how-to texts, From Lived Experience to the Written Word (University of Chicago Press, forthcoming). I hasten to add, however, that the Making and Knowing Project is already started on its next foray into the world of how-to texts, first by providing the tools for collaborators in a Research and Teaching Companion to Secrets of Craft and Nature in Renaissance France, and then bringing those collaborators together in a larger How-to Text Initiative. Stay tuned, and join us!

Secrets of Craft and Nature in Renaissance France. A Digital Critical Edition and English Translation of BnF Ms. Fr. 640 is openly accessible at https://edition640.makingandknowing.org.