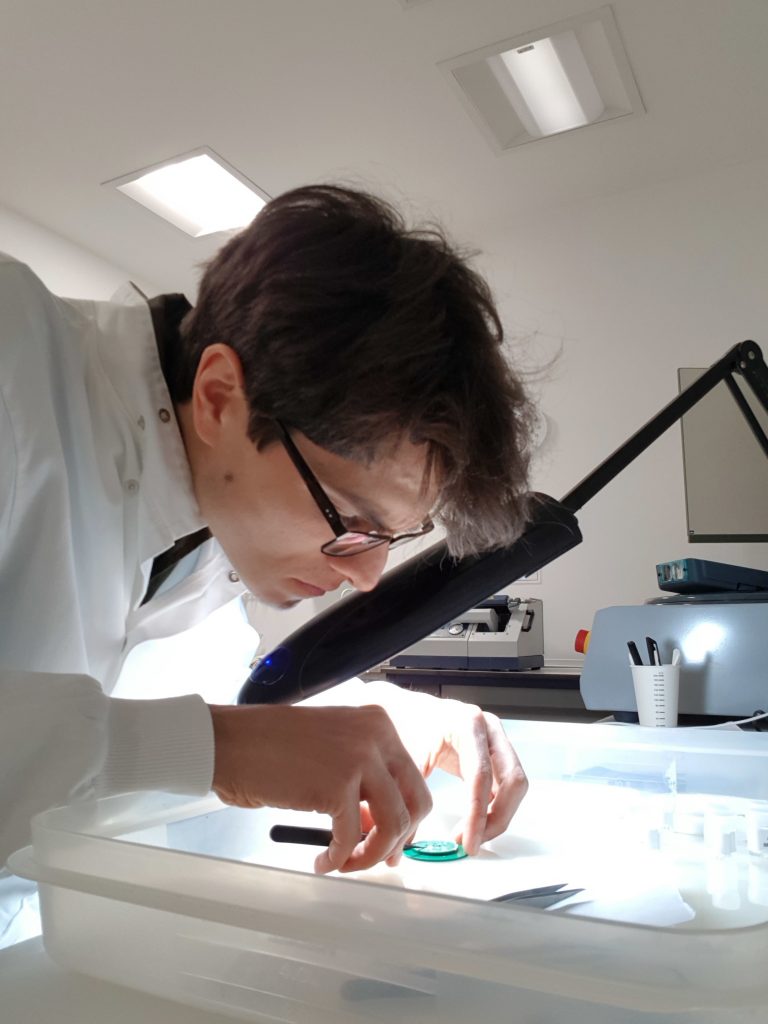 Stefan Hanß: Umberto Veronesi is a final-year PhD student at the University College London Institute of Archaeology. In his PhD project, Umberto Veronesi uses his expertise in archaeological sciences to examine the material worlds of alchemical and early chymical laboratories in seventeenth-century Oxford and Jamestown (fig. 1). In the upcoming British Academy event Microscopic Records: The New Interdisciplinarity of Early Modern Studies, c. 1400–1800, he will run the masterclass Archaeometallurgy, Alchemy and the History of Science. In this blog entry, Umberto Veronesi speaks about some of the exciting findings made during his research on metallurgical experiments in colonial Jamestown. This research has been published in more detail in Archaeological and Anthropological Sciences.

Fig. 1: At work in the lab: Umberto Veronesi conducts most of his scientific analysis in the UCL Wolfson Archaeological Science Laboratories, whose research and laboratory team is also involved in preparations for the upcoming British Academy event on “microscopic records”, and also in the Pitt-Rivers Laboratory for Archaeological Science at the Department of Archaeology, Cambridge (in this figure).

Umberto Veronesi: In Spring 1607, around a hundred men arrived in Virginia where they founded what became to be the first permanent British settlement in North America: Jamestown. The New World promised great opportunities for profit and exploitation, but it was also an alien world dominated by the unknown. Many settlers must have thought about the daunting story of Roanoke, the lost colony of some twenty years before. Historiography has traditionally painted Jamestown as a fiasco since British colonizers largely depended on beneficial relationships with indigenous communities. However, the colony was intended to be a major entrepreneurial venture which aimed at opening new trade routes and setting up industries to boost early English imperial economy. Captain John Smith wrote about an exploratory journey up the river James and says that “in our returnes (we) searched many places (where) we supposed mines, about which we spent some time in refyning, having one William Callicut, a refyner fitted for that purpose.”1 Callicut thought he could extract some silver from the minerals collected.

More than twenty-five years of excavation have brought to light an impressive quantity of artefacts related to the metallurgical activity of the fort. The most interesting materials are ceramic crucibles that metallurgists used in fire assay in order to assess how much of the desired metal—usually gold or silver—was present in a known amount of ore. The crucibles had been brought from England, but scientific analysis shows that they are of German manufacture. Germany was renown at that time for making high-quality crucibles, exceptionally strong and resistant to extreme temperatures and corrosive chemicals. Chymists trusted them for operations that–like fire assay and metallic transmutation—required careful quantification and reproducibility.2 William Callicut must have used one of these crucibles in his prospecting for noble metals. What minerals did he and the others test? What steps did they follow in their experiments? To answer these and similar questions, we need to turn to the residue stuck to many of the fragments (fig. 2). The residue forms when the crucible’s content—the mineral and any added reagent—interacts with the crucible itself at high temperature. The various components of the two mix in a glass-like mass whose composition is a sort of chemical fingerprint of what was going on back then. The residues are a mine of information, and their analysis allow to reconstruct the details of the metallurgical operations carried out in the early days of the colony.

Figure 2: Two triangular crucibles from Jamestown (left) and cross-section through one of the fragments analysed (right) showing the residue layer adhering to the vessel’s wall. Image credits: Marcos Martinón-Torres and Umberto Veronesi.

Cross sections through the residues were analysed under a scanning electron microscope (SEM), a technique that combines high magnification images to the chemical characterisation of selected areas. In the image below (fig. 3), we can see the microstructure of one such residue. Note its smooth glassy appearance compared to that of the ceramic to which it is stuck. There are bits of partially dissolved mineral grains floating around, while the white droplets are tiny pools of metal that were left behind trapped in the residue. As in an x-ray, the reason for their bright appearance is the higher density of the metal. In this specific case, the metal is lead and the mineral is a lead-rich feldspar that the metallurgists hoped it may contain some silver; but it didn’t. Some of the residues analysed, however, did contain silver droplets and remnants of silver-rich minerals, while others tell us that Callicut and the other chymists were also after sources of zinc and tin, which could be used in making copper alloys. 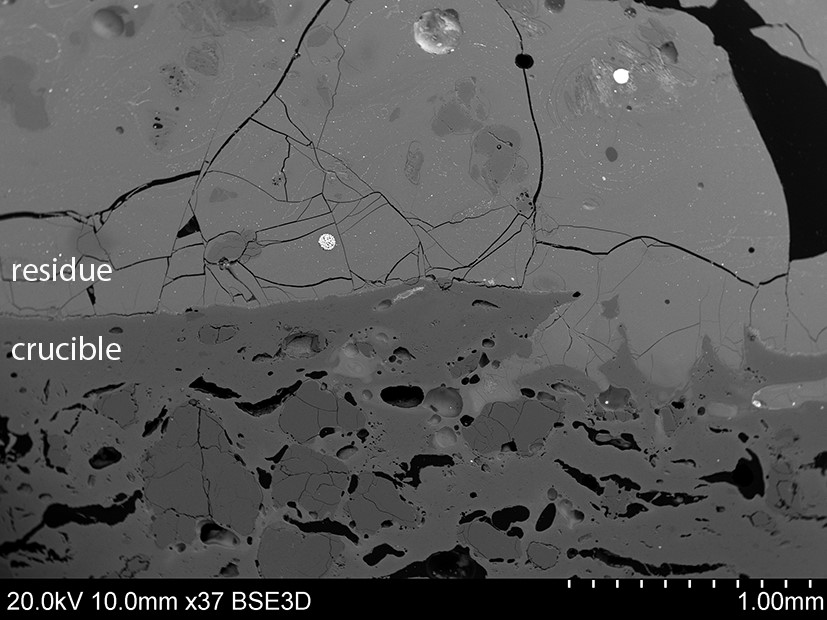 Figure 3: SEM image of a cross-section showing the crucible with the glassy-looking residue layer sitting on top of it. Note the partially-melted mineral grains floating in the residue as well as the bright metallic droplets. Image credit: Umberto Veronesi.

But those that hunger seeke to slake,

Which thus abounding wealth would rake:

Not all the gemmes of Ister shore,

Nor all the gold of Lydia’s store,

Can fill their greedie appetite;

It is a thing so infinite.3

Little if nothing of these chymical experiments was achieved in the end, but the narrative of laziness and incompetence is, to say the least, a rather simplistic one. Years of archaeological excavations and research are giving back a more balanced picture of the Jamestown experience. They unveiled the daily life of the people inhabiting the colony, their hopes, and their expectations. Scientific analyses of the industrial remains show that these people came equipped with the best tools on the market and that they were trying to make sense of a new and complex environment, one which must have challenged established knowledge and required testing in the furnace. Archaeological Sciences help uncovering the lost microscopic records of such early modern stories.

3 Smith, The Generall Historie of Virginia, 143.

Hudgins, Carter C., Marcos Martinón-Torres, and Thilo Rehren, ‘From the Mines to the Colonies: Archaeological Evidence for the Exchange and Metallurgical Usage of English Copper in Early Seventeenth-Century Ireland and Virginia’, in: Audrey Horning and Nick Brannon (eds.), Ireland and Britain in the Atlantic World (Dublin: Wordwell, 2010), 157-180.

Martinón-Torres, Marcos and Thilo Rehren, ‘Trials and Errors in Search of Mineral Wealth: Metallurgical Experiments in Early Colonial Jamestown’, Rittenhouse: The Journal of the American Scientific Instrument Enterprise 21, no. 66 (2007): 82-97.

The Subtlety of Early Modern Microscopic Records: Tillmann Taape on Distillation, Materiality, and t...
Swords in the Age of Shakespeare: Marc Gener-Moret on Archaeometallurgy and Microscopic Records of E...
Masterclass Report V: Photogrammetry