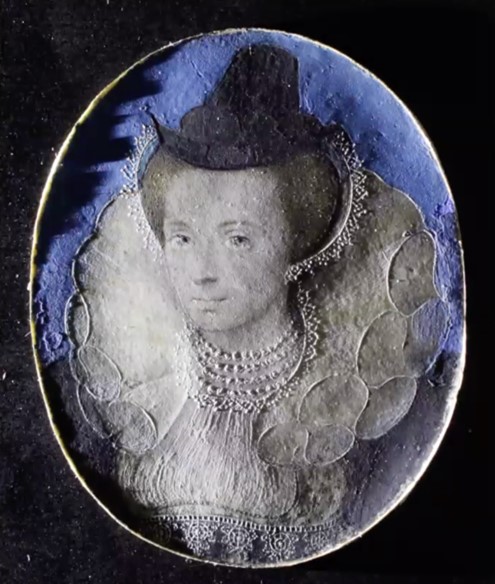 This masterclass was delivered by Dr Paola Ricciardi (The Fitzwilliam Museum, Cambridge).

In the second masterclass attendees joined Dr Paola Ricciardi at the Fitzwilliam Museum’s Analytical Laboratory for an exclusive digital tour and demonstration of the scientific equipment involved in her ground-breaking prior examination of Isaac Oliver’s (1565-1617) late sixteenth-century miniature portrait of an unknown woman. In talking the audience through the processes of laboratory analysis Ricciardi’s masterclass illustrated the creative power that X-ray technologies–typically used to identify pigments–have to generate broader research questions and foster new interdisciplinary connections in the social, cultural and material histories of Renaissance Art. Ricciardi convincingly argued that we can gain valuable insights into the microscopic practices of early modern limners when Raman spectroscopy and X-ray fluorescence spectrometers (XRF) are used to explore the materiality of miniature portraits. While this masterclass was particularly relevant for researchers seeking to recover information about artisans, such as Isaac Oliver, for whom we have little textual documentation, it ultimately prompted wider discussions about how scientific analysis can and should be an integral part of future project design and research training in the humanities.

Scientific technologies have not replaced more conventional forms of analysis; a lot can be learnt about the materiality of miniatures and the practices of limners with the naked eye. Before Ricciardi examined Oliver’s miniature on a microscopic level, attendees were shown an image of the painting, dubbed ‘Pretty Lady’, in raking light (figure 1). By simply placing a light source to the side of the painting its three-dimensionality and varied textures were exposed. For example, detailing on the lace collar, pearl necklace and azurite background were found to be raised surfaces created by a process called floating-in that, Ricciardi explained, was commonly used by limners. At this level of examination, the tell-tale signs of the support are also exposed. ‘Pretty Lady’ was painted on parchment that had been glued to a playing card. The use of such an inexpensive and everyday material not only highlights artistic thrift, but also prompts questions about the symbolic meaning of the specific rank and suit of the chosen card. 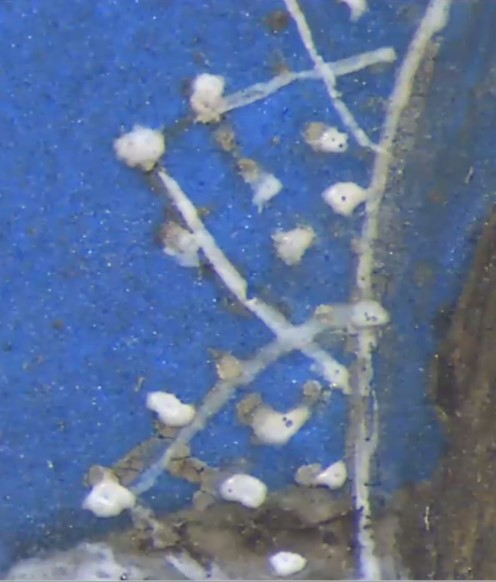 Nonetheless important evidence can be overlooked despite close scrutiny of a painting at a non-microscopic level. In the remainder of the masterclass Ricciardi deftly showed how the colour response and elemental composition of pigments shown under Raman spectroscopy and XRF spectrometers had revealed something entirely unexpected about Oliver’s miniature. Under XRF the white collar was found to contain mercury, which is unusual since lead was thought to be the only metal contained in white pigments from Europe in the sixteenth century. On returning to ‘Pretty Lady’ it was, in fact, possible to see the barely visible signs of a greyed pigment on the collar left behind by the mercury sublimate (figure 2). This is the first time that calomel, composed of mercury chloride, has ever been found in European artwork.1 The finding sheds light on a statement made by the famous English limner Nicholas Hilliard (1547-1619) about an ‘excellent white [pigment] to be made of quicksilver’ used by ‘women painters’.2 We now have scientific evidence to corroborate Hilliard’s seemingly bizarre suggestion that limners utilised the same sublimate in their pigments that was commonly used by women for cosmetic purposes. From Ricciardi’s exploration into the materials, techniques and history of this late sixteenth-century miniature, art and material culture historians can trace the global movement of artistic influences, trade in materials, and connections between the daily practices of artisans and courtly women. Such exciting opportunities for future exploration underscore the huge potential of more inclusive interdisciplinary research projects.

Manchester historian selected as one of the 2019 British Academy ‘Rising Stars’
The Subtlety of Early Modern Microscopic Records: Tillmann Taape on Distillation, Materiality, and t...
Masterclass Report VII: Archaeometallurgy, Alchemy, and the History of Science
Tweets by OfficialUoM