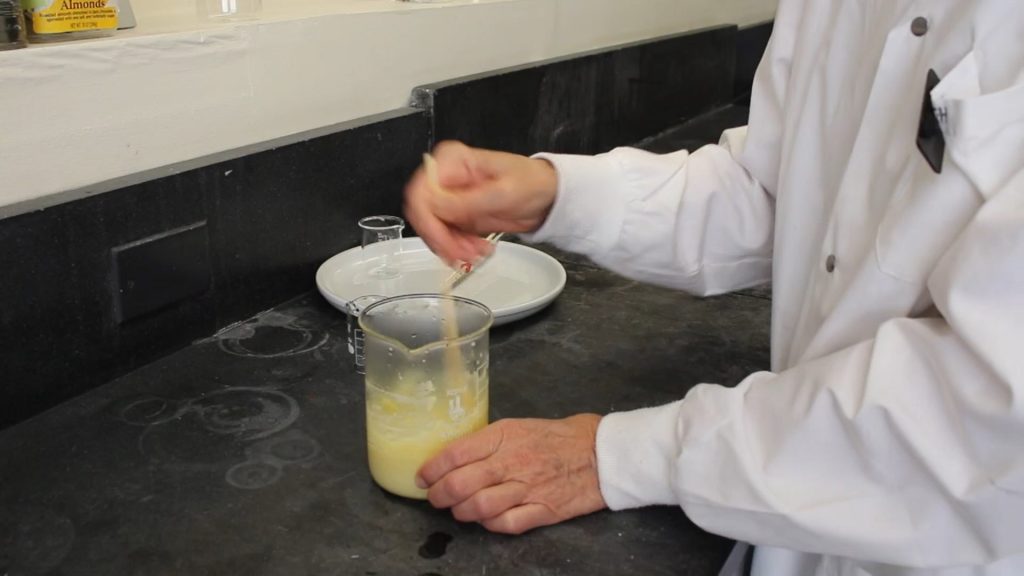 Members of the Making and Knowing project team, Prof Pamela Smith, Dr Tianna Uchacz and Dr Tillmann Taape, introduced remaking methodologies to the attendees of the sixth masterclass. The basis for this masterclass was a pre-circulated video of the team remaking a burn salve according to a late sixteenth-century recipe contained in BnF MS Fr. 640, whose critical edition and translation was recently published by the project (video below). Remaking this salve elaborated a key point in Smith’s keynote speech: the epistemic value of remaking is not simply that the researcher is learning how-to make something, but it is rather that in the process they are having to understand a whole host of related knowledge systems and make previously invisible material practices perceptible.

The salve calls for only three ingredients: linseed oil, beeswax and holy water, which are transformed into a fluffy, pale ointment through a series of steps. The beeswax is melted in the heated oil and then allowed to cool until beginning to curdle. This heating and cooling of the ingredients is then followed by ‘washing’ or gradually mixing in holy water. This final step is accompanied by the recital of paternosters, exactly forty-five times, both a timekeeping practice and a religious expression. The underlying emphasis on faith and the role of the supernatural in ordaining the transformative powers of the artisan upon materia medica were made more explicit by actually reciting the paternosters and in witnessing the salves physical changes. Remaking this recipe made the material dimensions of a religious ritual apparent and provided an example of the ways that making and doing can be forms of ritual practice in themselves.

The masterclass then focused on the methodological challenges and advantages of remaking such a recipe instead of merely reading it. For a contemporary researcher this seems like an unusual way of doing and learning since today we tend to rely on sight. Smith, Uchacz and Taape highlighted the heuristic value of using remaking methods and the multitude of further questions this can raise in any research project. While the results of remaking can never be truly authentic (there are, for example, vast differences between period and modern materials and equipment), the process of remaking, including intensified engagement with the materials and techniques and closer attention to even minute details of the recipe, is a valuable research tool in itself. Crucially, making a burn salve according to the sixteenth century recipe is not about finding out if the ointment ‘works’.

The masterclass thus highlighted how remaking as a research methodology has the potential to uncover the hitherto unexplored networks of knowledge and the practices of early modern people. In reconstructing this seemingly simple recipe it proved to be both time consuming and physically demanding. The hands-on nature of this masterclass prompted historians to consider the epistemic importance of sounds, smells and temperature in sites of production and showed that remaking is a powerful and accessible means of revealing the hidden processes of early modern practitioners and the minutiae of the world in which they and worked.  There is little doubt that those present for this masterclass left feeling inspired and better equipped to include remaking in their research and teaching.

Vendy Hoppe, The University of Manchester.

Writing History in the Time of COVID-19: Historian Timothy LeCain on the Third Warning, Microscopic ...
Swords in the Age of Shakespeare: Marc Gener-Moret on Archaeometallurgy and Microscopic Records of E...
Ulinka Rublack on Early Modern Microscopic Records
Tweets by OfficialUoM