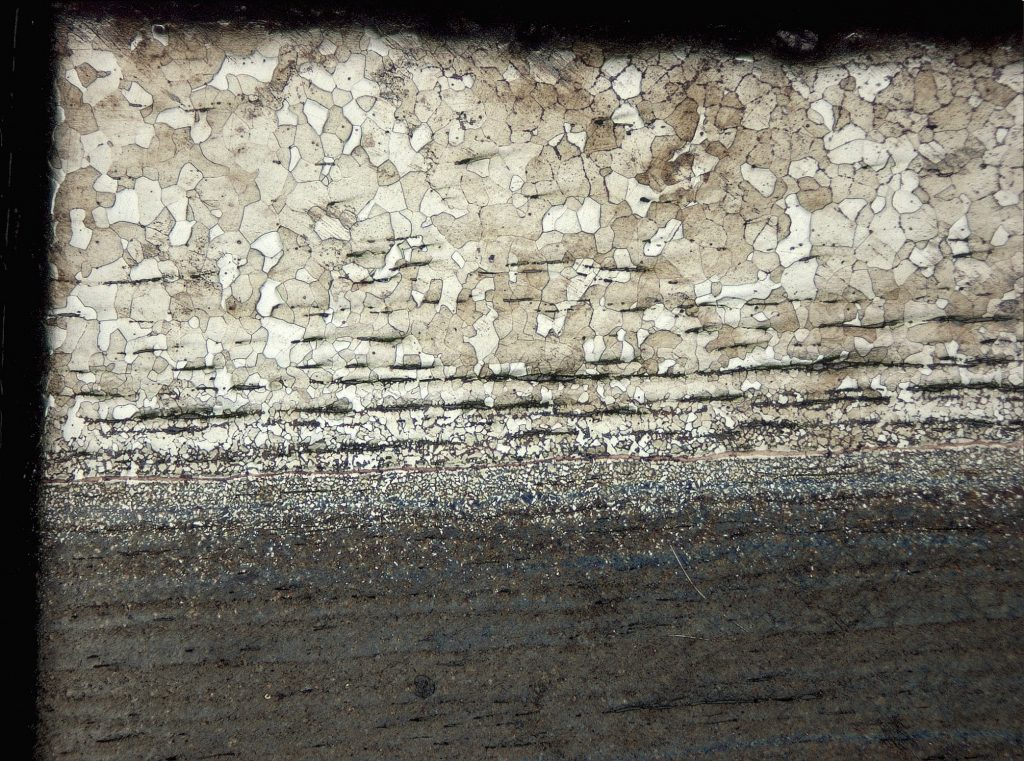 Swords in the Age of Shakespeare: Marc Gener-Moret on Archaeometallurgy and Microscopic Records of Early Modern Rapiers

Stefan Hanß: Marc Gener-Moret is a Marie Skłodowska-Curie Actions Fellow at the McDonald Institute for Archaeological Research at the University of Cambridge and an expert in historical weaponry. Having been trained in physics, materials sciences, and archaeology, he conducts laboratory-based research on the material, social, and cognitive worlds of metals technology and historical iron weapons in particular. He uses a wide range of scientific analyses and analytical techniques such as metallography, XRF, SEM-EDS, LA-ICP-MS and ToF-ND to explore what it meant to produce, handle, alter, use, and appreciate weapons in the past in the Iberian Peninsula, the Mediterranean, Europe, and also Asia. Most recently, Marc Gener-Moret has also been involved in the analysis of excavated ironworking remains from aboriginal, Spanish and Dutch settlements in seventeenth-century Taiwan. During the British Academy event Microscopic Records: The New Interdisciplinarity of Early Modern Studies, c. 1400–1800, Marc Gener-Moret will speak about the scientific analysis of swords from early modern Europe and Formosa. 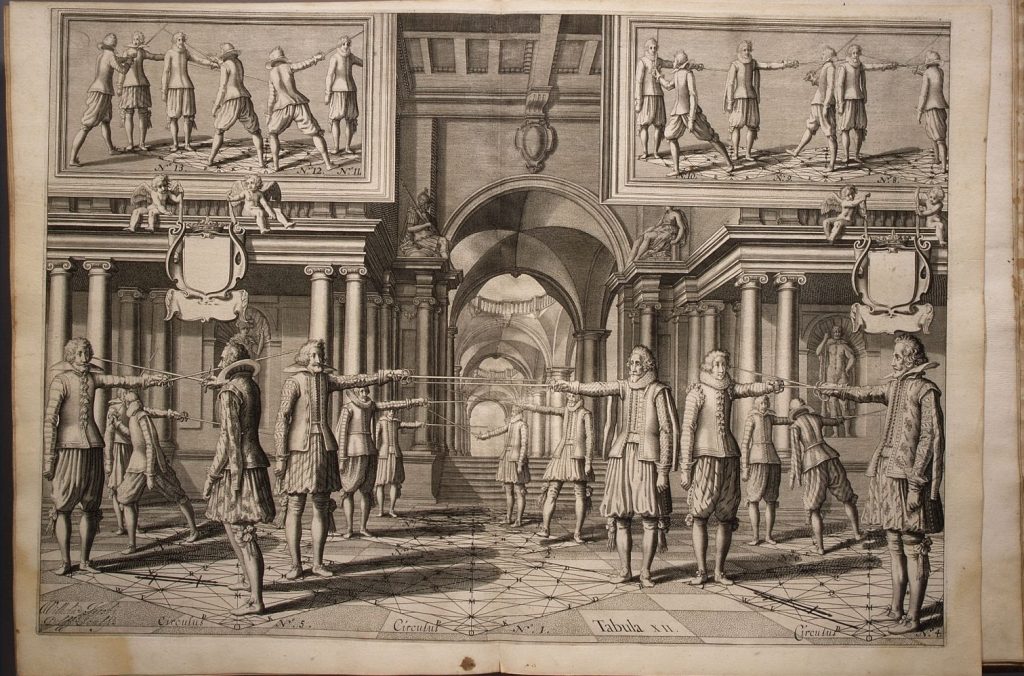 SH: In early modern texts, swords are omnipresent. They were crucial artefacts in sixteenth- and seventeenth-century estate-based societies; they materialized gender, social status, and further key concepts such as honour. What is it that can be said about the material culture of swords in early modern Europe on the basis of textual evidence?

Marc Gener-Moret: References to swords are indeed ubiquitous in early modern literature. Take Shakespeare’s The Merry Wives of Windsor, for instance, where Falstaff states: “(…) to be compass’d like a good bilbo in the circumference of a peck, hilt to point (…)” (Act III, scene 5). A “bilbo” is a type of rapier, a long, narrow bladed sword with a complex hilt that protects the hand. It is to be carried as part of your everyday attire to show status and to be used for duelling or self-defence (fig. 1). In seventeenth-century England, this sword’s name had been derived from its Spanish origin: such swords were traditionally imported from the city of Bilbao in the Basque Country. Spanish blades, especially those from Toledo, were famed all over Renaissance and early modern Europe for their mechanical properties, and they better be true to their fame if expected to perform like Falstaff says: a “peck” is an old unit of dry measure, and it also names the container of that capacity, equivalent to 9092.18 cm3, about nine litres. Not much if expected to fit in its circumference a sword that, “hilt to point”, could easily stretch for 115cm (fig. 2). In this case, the circle would be of a diameter of circa 37 cm! Quite a feat for a blade that was also expected to be stiff enough to stop your opponent’s attacks and eventually run them through if, at the end, no other argument was acceptable in a discussion. 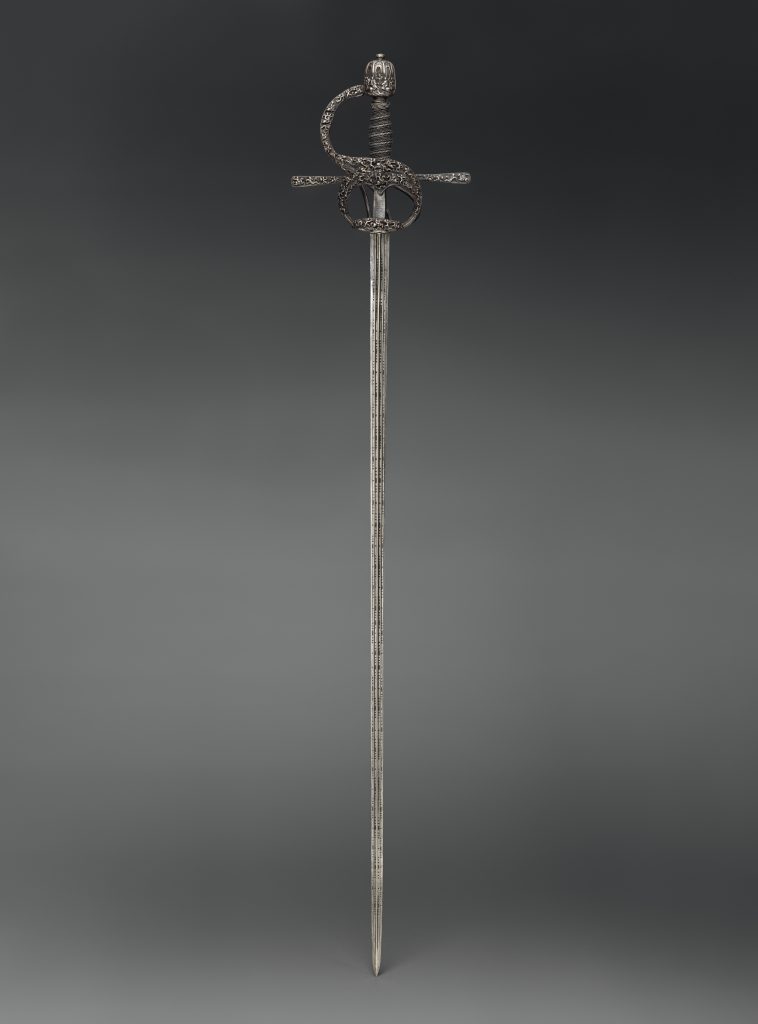 MGM: Falstaff’s credibility as a period authority on the mechanical properties of materials holds of course little water, if any, and we also know that in this specific passage of The Merry Wives of Windsor he may be slightly exaggerating in order to convey some pity upon himself. However, all this provides us nonetheless with interesting insights into the contemporary framework of expectations. This bit of information, together with the many other bits provided by early modern literature and documentation, contributes to the idea of what to expect of the performance of such a specific and quotidian object. The sword was omnipresent in Renaissance culture. Many men carried it on their side at that time, and men like Mercutio may find their end through it at these days.

SH: What can laboratory research tell us about these artefacts then?

MGM: Science-based analysis helps us to respond to the question of how these expectations were actually met. What was the procedure, the manufacturing technique, that led to the object which was expected to fulfil these cultural expectations? For responding such questions, we have to go to the microscopic record in order to find how the material must have been processed in order to become what it had been expected to be. Our object of study here is a rapier, and more specifically its blade, arguably its most important part. The mechanical behaviour of such a blade is a consequence of many factors: its shape, the choice of its material and the potential manipulations that can change the properties of said materials. The shape can be measured, but the material and its manipulation or the treatment applied to it must be analysed microscopically (fig. 3). 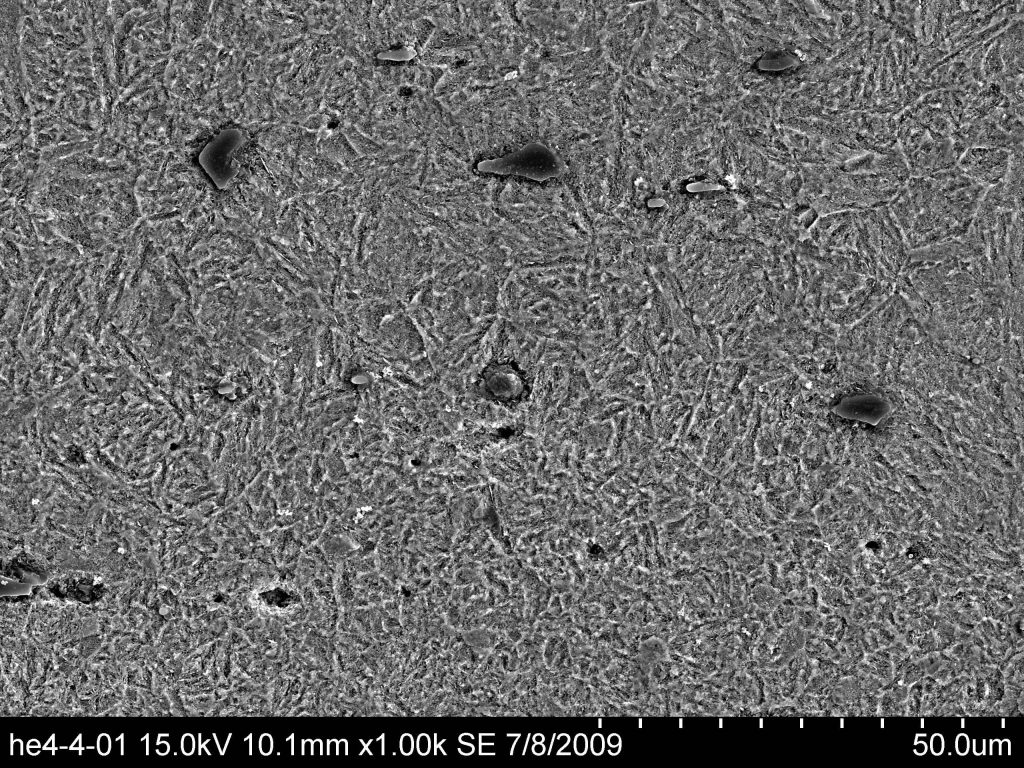 Fig. 3: Microstructure of a late seventeenth-century rapier blade. This microstructure (“tempered martensite”) is a key feature of blades that have been hardened by quenching and then carefully heated to reduce its fragility to a certain degree. SEM image in Secondary Electrons mode. Image credit: Marc Gener-Moret.

SH: How would you usually proceed when analysing historical samples of metalwork?

MGM: In the best scenario it is possible to take a sample, which will then be embedded in resin, ground down and polished to a mirror finish with a perfectly flat surface, to which a chemical reagent will be applied. Depending on the nature of the material, and especially on what we are looking for, different reagents can be applied but the final goal is to prompt the sample’s different micro-components to react differently to the reagent and, thus, to create a contrast. The resulting surface will be then observed under an optical or an electronic microscope, where the different elements of the microstructures will become apparent. This procedure is a technique called Metallography. Microscopic records reveal not only the composition of the metal, but also what kind of procedures were applied to it in order to change its mechanical properties.

In the rapier blade, the materials of choice are iron and also steel, an alloy of iron and carbon (fig. 4). Iron is mechanically tough, it absorbs impacts without failing, and when stressed beyond a certain point it bends and stays bent without breaking. Steel is even tougher, but it has an important additional feature: when heated beyond a certain temperature and then cooled really fast, as when plunged in a vat full of water, it hardens to an extraordinary degree. This makes it excellent to keep an edge or a point without dulling; it also provides the rapier blade with an enhanced elasticity to recover its shape if deformed, yet this procedure also makes the blade fragile, prone to shatter if bent too much. A bit of extra heat, in a process called “tempering”, can soften hardened steel a bit, which is enough to keep its edge retention and elasticity whilst significantly reducing its fragility.

Fig. 4: Microstructure of a longitudinal section of a late seventeenth- or eighteenth-century rapier or smallsword blade. The brighter part (top) is iron and corresponds to the surface of the blade. The darker part (down) is steel, hardened and tempered, and it corresponds to the core of the blade. The section was taken from a part of the blade close to the hilt, and it confirms that the bottom of the blade was made out of a steel core encapsulated in iron. The reason was probably to save steel, which was more expensive than iron, and to ensure a particularly low degree of fragility in that area of the blade, which was subjected to high mechanical stress but needed no edge retention.

MGM: All of this gets revealed thanks to metallography: a microscopic technique informing us about whether there is iron or steel in the blade; and if so, if the steel has been hardened or tempered and for how much. Metallography tells us how the blade would have behaved: if it has been stiff enough to offend, tough enough to defend, hard enough to cut and pierce, and flexible enough to survive violent encounters. Metallography tell us, too, if the “bilbo” would have fit the peck at the end—to go back to Falstaff’s wording.

Such analysis, thus, provides answers beyond the artefact’s actual materials. Microscopic analysis empowers us to know why materials have been processed in specific ways. Why the blade had to be hard and tough, light and stiff, long and narrow at the same time; why it had to be used in a certain way; why it was carried the way it was. Microscopic analysis links the study of materials with their use, but also with broader cultural issues like skills, fashion, honour, violence, and war, as well as with people’s expectations for life and death. All of this can be explored when looking through the eyepiece of the microscope.

Going back to Shakespeare, again, the conclusion is that the sword would either bend or snap if we try to fit it in the peck. Otherwise the rapier would be too wobbly to be optimal for combat. Falstaff was, indeed, exaggerating.

As fits the character.

SH: You were also part of a team studying archaeological artefacts from Heping Dao, Keelung. What can be said about the seventeenth-century encounters between Taiwanese, Spaniards, and the Dutch when examining microscopic records?

MGM: We excavated an area associated to a Spanish fort, later seized by the Dutch. We found that it was originally occupied by an aboriginal settlement stretching back to the local Neolithic. Among many other things there were remains of metallurgical activity related to iron, including waste materials (slag) that were analysed microscopically. This contributed to a better understanding of the relationship of the original inhabitants within other areas of the island, as well as of important aspects of the disruption brought by the colonizers. In regard to metallurgical aspects, these results also help us re-evaluating some of the established narratives about the origin of this technology in Taiwan to stress the important active role played by its original inhabitants. This material played an important role in the exchanges between the aboriginal inhabitants and the Europeans, but the results of the excavations evidence that the presence of the Europeans, and of the Chinese after them, was highly disruptive. They build not only a fort, but also a monumental church, and completely changed the physical landscape, as well as its significance. If we study early modern microscopic records, we can make broader claims about continuities and discontinuities.

Williams, Alan, The Sword and the Crucible: A History of the Metallurgy of European Swords up to the 16th Century (Brill: Leiden, Boston, 2012).

Marc Gener-Moret, The University of Cambridge