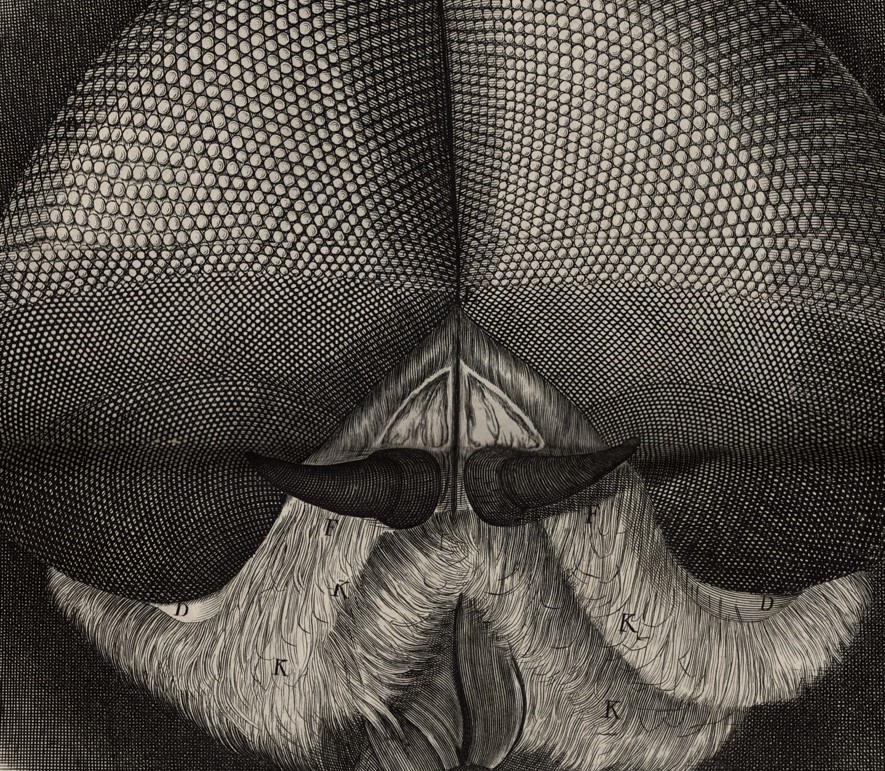 Detail of an engraving showing the eyes and head of a “grey drone-fly” seen under a microscope. Robert Hooke, Micrographia: or some Physiological Descriptions of Minute Bodies made by Magnifying Glasses with Observations and Inquiries thereupon (London, 1665), scheme XXIV, wikimedia (image by the National Library of Wales), https://commons.wikimedia.org/wiki/Category:Hooke%27s_Micrographia_Diagrams_from_the_National_Library_of_Wales#/media/File:Micrographia_Schem_24.jpg (access 21 April 2020).

Historians have described the sixteenth and seventeenth centuries as a time of a renewed interest in and fascination for material cultures. This also resulted in several breakthrough discoveries related to microscopic records—the material world’s records which are not visible to the human eye—and in new cultures of examining it. The early modern invention of the microscope is the most obvious example. Early modern protagonists tried to capture this new experience of knowing, seeing, and studying microscopic records with an emotional vocabulary that can be difficult to make sense of today. The profound affection, sheer overwhelming delight, the sense of marvel and sometimes even speechlessness resulting from viewing, exploring, and reconsidering microscopic records is referenced in various early modern texts. Today, we have lost the sense of novelty in seeing microscopic records for the first time. We therefore must rethink, and reframe, such texts in order to make sense of the affective novelty and emotional excitement of early modern experiences associated with microscopic records. What did it actually mean to see microscopic records, and to describe this visual experience with a grammar of subtlety and excitement? In this blog entry, I juxtapose early modern descriptions of microscopic records with images taken by laureates of the 2019 Nikon Small World Photomicrography Competition. Their stunning images are as unique as every experience, modern or early modern, so there is no causation implied in any of the following examples. These examples are no comparisons but rather confrontations; they are less implying similarities than urging us to open our eyes for conceptual, experiential and representational differences; essentially, this is an exercise in the de- and recontextualization of early modern material and visual cultures of microscopic records, and the experiences associated with it.

“I have contemplated many animals with infinite administration,” Galileo Galilei wrote in a letter to Federico Cesi in 1624, “amongst which the flea is most horrible, the gnat and moth are most beautiful; and it was with great satisfaction that I have seen how flies and other little animals manage to walk sticking to the glass and even feet upward.”1

“And after examining everything that occurred to me,” Johannes Kepler wrote in The Six-Cornered Snowflake in 1611, “I thus feel that the cause of the hexagonal form of the snowflake is nothing other than what is found in the regular figures of plants and the constant numbers. And since nothing occurs in those things without highest reason—not even what may be found by discursive reasoning, but what was originally in the plan of the Creator and preserved from the beginning down to the present day by the remarkable nature of the animate faculties—not even in a snowflake do I believe this regular figure exists accidentally.”² 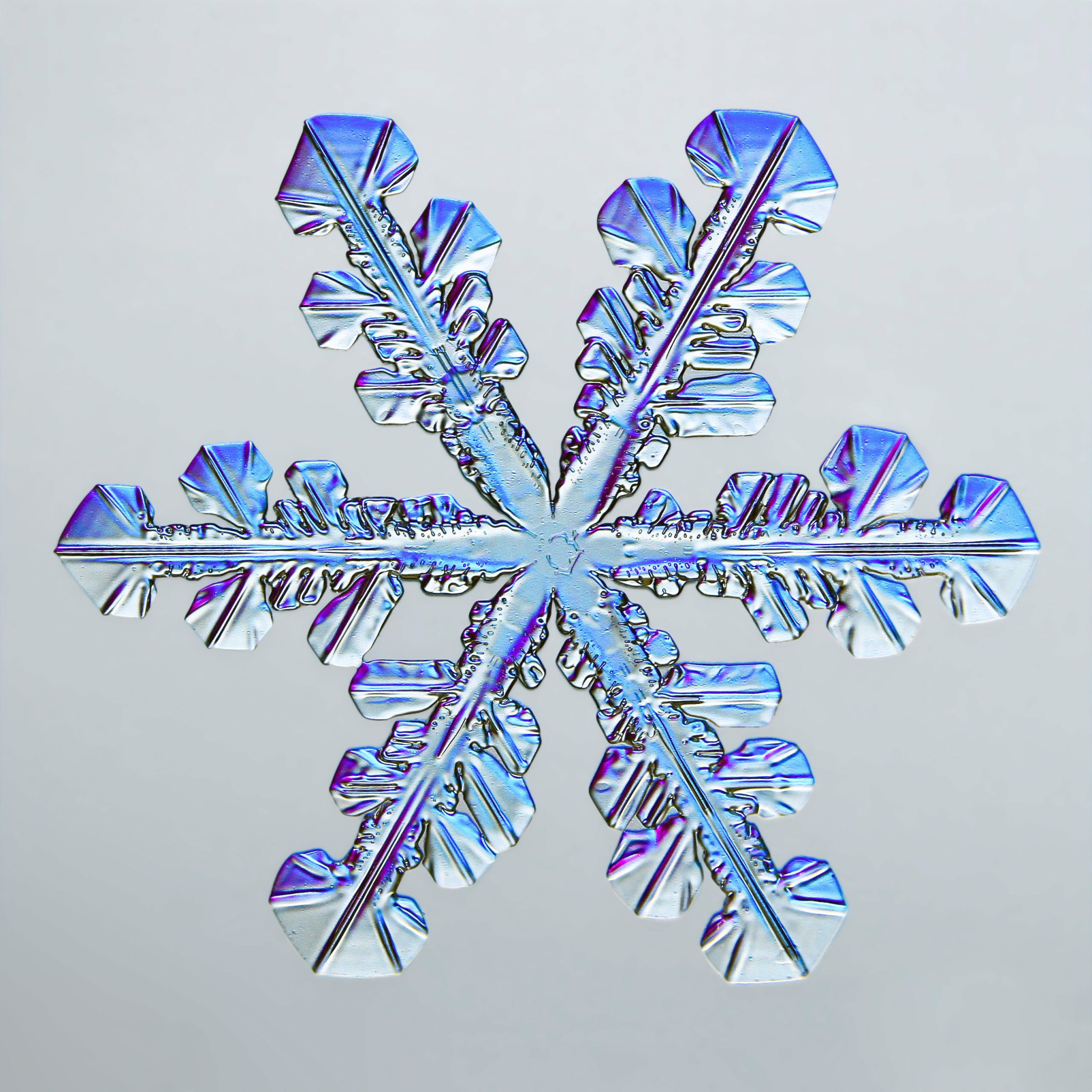 “I say that on the exterior surface of the cornea surrounding the entire mass of the eye,” Giovanni Battista Hodierna wrote in The Eye of the Fly in 1644, “one sees a great number of highly ordered sections, designed and drawn by curved and circular lines, which are equidistant from and parallel to one another, while intersecting one another at right angles, thus distinguishing the entire convexity of the eye into a number so great as to exceed three thousand; representing the circumference of the eye as a hemisphere divided into three thousand square pieces which resembles an undefined mosaic structure, of so many equal particles, commensurate and fitting together with most wondrous order for whomever looks upon it.”³ 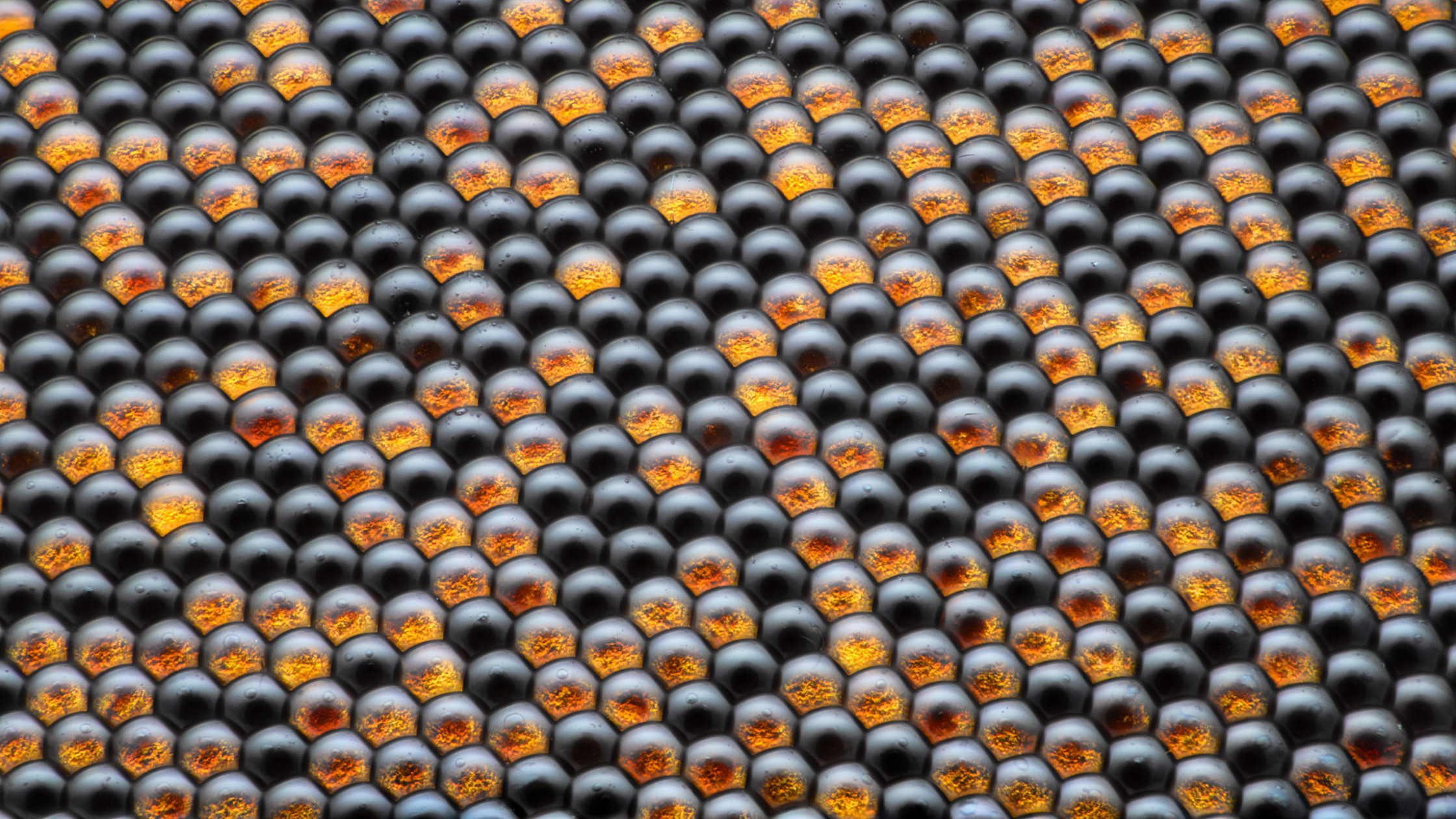 For introductory readings on early modern microscopy and its visual cultures, see:

New Collaborations between History and the Sciences: Historian John R. McNeill on the Future of Hist...
The Difficulties of Communicating What You Do (Not) See: Pamela Mackenzie on Early Modern Plants, Mi...
Pamela H. Smith on the Significance of Microscopic Records for Renaissance How-To Knowledge
Tweets by OfficialUoM