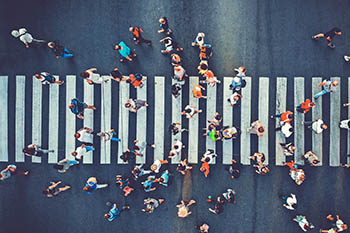 We have been commissioned by NHS England and NHS Improvement to support areas in England to improve community-based services and care for people who self-harm. Together with experts from the Manchester Self-Harm Project (MaSH) and NIHR Greater Manchester Patient Safety Translational Research Centre (PSTRC), we will support participating areas by providing: 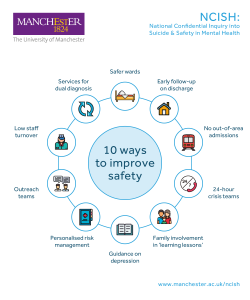 We are working with experts in Quality Improvement at the National Collaborating Centre for Mental Health (NCCMH) to support Sustainability and Transformation Partnerships (STPs) to strengthen their local suicide prevention quality improvement plans. This is part of a nationally recognised suicide reduction priority across Department of Health, NHS England, and an overall Mental Health Five Year Forward View recommendation to reduce the suicide rate by 10% by 2020/21.

Together with NCCMH, we are working with Quality Improvement teams in each STP to:

In May 2019, NCISH were winners of a 2019 Making a Difference award for social responsibility.

Click here for a video explaining our work on suicide prevention.

Read our March 2020 update on the national suicide prevention programme in this blog, by NCISH researchers Nicola Richards and Cathryn Rodway.

Download a summary of how we help local areas improve suicide prevention plans.

A diverse range of multifaceted, novel projects have been established throughout this programme. See some examples of innovative work being carried out by local areas in the programme.

We have extended our national suicide prevention support role to include responding to local area’s concerns specific to the pandemic. Read more about our work here.

Read a blog on NCISH’s contribution to suicide prevention during COVID-19, by NCISH researcher Nicola Richards. 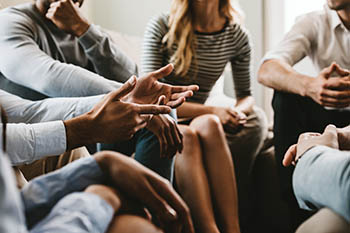 Alcohol and drug misuse are key risk factors for suicide. There is currently no national study of suicide by people in contact with alcohol and drug services, and following NHS reforms, service provision has become more complex.

We are conducting a new study investigating deaths by suicide of people under the recent care of alcohol and drug services based on a methodology recommended in our feasibility study. We will undertake this by (1) linking existing data, (2) using existing data for case-control exploration, and (3) collecting and analysing clinical data from Serious Incident Reports.

The study is commissioned by the Healthcare Quality Improvement Partnership (HQIP). Further information on the study design and purpose, and how we comply with data protection obligations, can be found in our study summary and information sheet, and in our Data Protection Impact Assessment document.

We work collaboratively with national and international academic and health colleagues in the area of suicide prevention research. Our ongoing projects are listed below.

*NEW* findings from the first phase of the study published as a pre-print, so not yet peer-reviewed.

We found the overall suicide rate was not greater than in the general population, but risk was 2-4 times higher in male and female veterans aged under 25 than in the same age groups in the general population. Male veterans aged 35 years and older were at reduced risk of suicide. Male sex, Army service, discharge under the age of 35 years, being untrained on discharge, and length of service under 10 years were associated with increased suicide risk. Factors associated with reduced risk included being married, a higher rank and deployment on combat operations.

The purpose of the study is to understand the rate, timing and risk factors for suicide for those who have left the UK Armed Forces between 1996 and 2018. The study will include the linkage of data from the Ministry of Defence on all suicide deaths in serving personnel and all personnel discharged from Armed Forces with NCISH data on general population and mental health patient suicides. It will also include a review of coroner’s records and inquest hearings for a sample of veteran suicide deaths. This study will provide more detail of the factors related to suicide (particularly early and recent vulnerabilities, in-service exposures, difficulties after discharge, living circumstances, and contact with a variety of health and third sector providers) in this population.

The study is funded jointly by the Ministry of Defence and NHS England. Further information on the study design and purpose can be found in our study summary and information sheet, and is also available on the GOV.UK website.

This collaboration between the NCISH and SID-Cymru (hosted with the Secure Anonymised Information Linkage (SAIL) Database) will link routinely collected data about all individuals in Wales who died by suicide between 2001 and 2015 with clinical data collected by the NCISH on patients in contact with mental health services within 12 months of their death.

One of four research themes being undertaken by the NIHR Greater Manchester Patient Safety Translational Research Centre in collaboration with NCISH, to further explore suicide and self-harm by primary care patients.

The impact of suicide in the UK

A survey-based study conducted in collaboration with the Support after Suicide Partnership (SASP) to better understand the impact of suicide on people’s lives, including the support received.

All our research projects

More information on our research projects can be found within the University’s Research Explorer.

View all our projects