A Roundhouse-Museum for Feliciano Lana, the Son of Dream Drawings 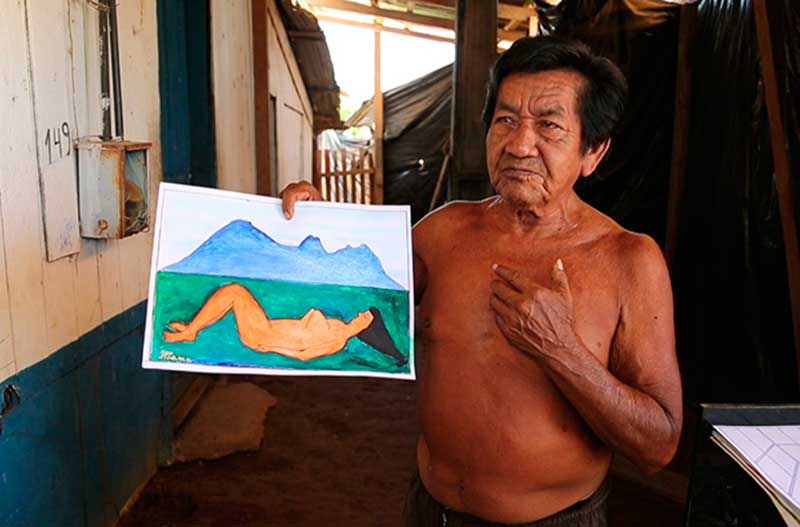 Before time, darkness reigned. Everything was a vast emptiness without memory. The nothing existed, and it itself was its own thought. There was a crackling in the silence like a seed about to germinate. And seated on a quartz bench, grasping in one of her hands a gourd made of ipadu (1) and in the other, a fork to hold her cigarette, Yebá Buró, the Grandmother of the World, arose of her own will, she who on her own account desires to Be, which is why we call her the Not-Created, because she herself makes herself through her own thoughts. Covered with magical, brilliant ornaments, her presence was so magnificent that the reflection of her brilliance gave life to the darkness, and everywhere that light reached became known as Utãboho Taribu, the White Quartz Room.

Still seated and looking out upon the emptiness of memory, she ate ipadu and smoked tobacco, and she reflected on the future of the Cosmos and of beings. She was the one who conceived of how the past, present, and future should be. Those are none other than that now, and all memory has been in gestation from that moment on.

This is my interpretation of one of the versions of Genesis that I learned through the Lana family, who at the end of the 80s decided that they were going to use Western graphic symbols to record their memories, safeguarded and taught by their people ever since Yebá Buró emerged. 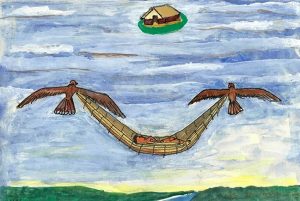 The narrative book written by Mr. Firmiano Lana and Luiz Lana, Antes o mundo não existia [Once, the World Didn’t Exist], was the first text I could understand on the aesthetics of modern Indigenous art. Mr. Feliciano Lana, Firmiano’s nephew and Luiz’s cousin, continued the legacy of his relatives, as he went on creating his own style more and more, expanding the repertoire of Desana visual narratives, and sometimes creating his own narratives based on his day to day experiences. What I understand only now is the importance of the Lana family in the creation of imagery until then unseen in Brazilian Indigenous culture.

Just as Christianity created an image of their God and spread it through art, similarly the Lana family recorded the gods of the Desana cosmogony, which before then we only knew orally through the stories of the shamans, the only ones who managed to travel freely throughout the Worlds.

Feliciano Lana’s paints and brushstrokes gave me the experience of knowing what the Snake-Canoe, Yebá Buró, the Lake of Milk, and the Universe’s Roundhouses were like. The importance of Feliciano Lana’s creative energy is incalculable for the whole world, and even more so for an indigenous artist like me. Before the Lanass, all of our orality was transformed in our imaginations as we wondered, What would Umukomahsü Boreka be like? Would he be tall, short, skinny, fat? What expression would he have on his face? Only the chosen shamans knew these faces, and so it was up to us, mere kids, to create our own imaginative images of those heroes of a time before the world came into existence. The Lanas repaired  that, and today we know how to picture Umukomahsü Boreka, the chief of the Desana. 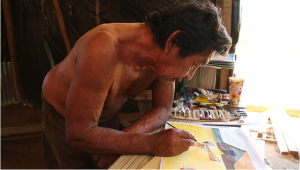 Some of you might start up the chorus and say: who is Feliciano Lana to say how things are or aren’t? You’d be mistaken if you thought the images he produced were only drafts from the solitary imagination of one artist—it’s not as simple as that. Feliciano Lana is from the lineage called Kêhíripõrã, which means “children of the dream drawings,” and so he was born destined to be who he was. What he recorded in paint on paper wasn’t only art, but also a profound knowledge of the cosmology passed on by his uncle, the great Kumu (2) and Bayá (3) of the Kêhíriporã, and later by journeys in various villages and conversations with other Indigenous sages.

The importance of Feliciano Lana for the arts, for Desana mythology, and for contemporary Indigenous artists could be put on the same level as the importance that Michelangelo has for Christian history and Western art. But instead of a Pope Julius II in the Upper Rio Negro region, Feliciano Lana had Father Casimiro Béksta as his patron. Instead of the ceiling of the Sistine Chapel, Feliciano Lana painted the ceiling of the Roundhouse-Universe, where you can follow Genesis, the creation of the first human being, the flooding and burning of the world, the great Snake-Canoe. With the help of a priest, Feliciano takes us to the first breaths of this planet we call home, using Desana mythology as his foundation, which is quite ironic, considering that the church was responsible for a great part of the violent attacks against Indigenous knowledge and spirituality. Feliciano also narrated the present day with paint on paper or canvas. His art appeared in various exhibitions in Brazil and Europe, which led him to the world outside the village, and then he’d put everything new he learned back into his art. Lana’s production is a data bank, filled with knowledge that is both magical and everyday. It needs to be studied, preserved, and shared with everyone, especially those who will be born in times to come. 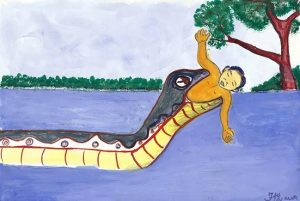 Feliciano Lana’s maternal village is São João Batista on the Tiquié River, in the district of Pari-Cachoeira. It’s a territory where twenty-two other Indigenous peoples live. Territory that knows a lot about the resistance born from having to survive innumerable epidemics and violent attacks brought by the State, similar to the experience of all the Indigenous peoples of this country, in fact. Unfortunately, in 2020 we’ve had another difficult time that we weren’t prepared to face. Far from the State and from public policies, the interior of Amazonas state was hit by the wave of Covid-19. Unfortunately, like other friends, Mr. Feliciano Lana was taken by this virus. If Feliciano were Baniwa like me, we’d say he turned into a star and now has joined those who were present in the Genesis of the Universe; since he is Desana, maybe he’s now alongside Yebá Buró, perhaps listening attentively to the secrets that weren’t revealed during life. Maybe he’s recording what he hears on paper with magical paints that only Yebá Buró knows.

Feliciano’s passing is a loss for the Desana, a loss for art, and a loss for the world. Each time that a master artist, an elder, transforms into a star in the Cosmos, the world loses a library of knowledge and poetry. As an artist, I’m losing a friend and master, a great example of the power that art possesses for people who don’t have access to the highest echelons of the art world, but which nevertheless completely changes many people’s worlds, just as he transformed mine. As an artist and an Indigenous person, my obligation is to keep Mr. Feliciano’s memory alive and present, so that his poetry and greatness will be known by as many people as possible. To care for his memory so that he’s present in our living thoughts, for to understand the past is to ensure that the future will be a positive experience for those to come.

Before the time of colors, darkness reigned, everything was a great emptiness. With a magic thought he emerged, seated on his kumurõ (4), holding brushes and paints, and out of his own will he created art. Before Feliciano Lana, art didn’t exist. Before art, the world didn’t exist. 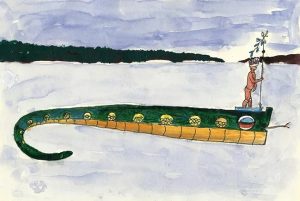 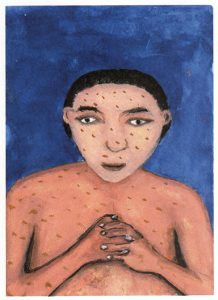 Internationally recognized for his art combining myth, storytelling and dreams in color and paint, the Desana artist Feliciano Lana passed away on May 12, 2020 after battling Covid. He died at his home in the São Francisco community, in São Gabriel da Cachoeira, in the Upper Rio Negro region, Northwestern Amazonas. He was 83.

Denilson Baniwa was born in Barcelos, Amazonas, Brazil, in 1984. His art explores his experience of being Indigenous in the current moment, combining traditional and contemporary Indigenous references, and making use of Western icons to raise awareness about the struggle of Indigenous peoples in various media and languages.

Translated from the Portuguese original by Tiffany Higgins

(1) Ipadu: in the Desana language: coca plant (Erythroxylum, ahpĩ in the Baniwa language). Its toasted, ground-up leaves are chewed and swallowed.

(2) Kumu: in the Desana language, the healer; master of spells and healing ceremonies, expert in the Cosmos; pajé; shaman.

(3) Bayá: in the Desana language, master of dances; officiant of ceremonies; the one who knows the rituals.

(4) Kumurõ: in the Desana language, a wooden bench where the masters sit; the kumu’s and baya’s bench.