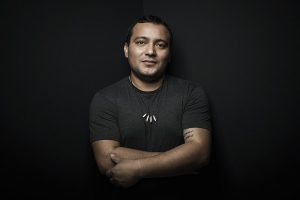 Denilson Baniwa was born in the village of Darí, in Barcelos, Amazonas, in 1984. His work as an artist combines traditional and contemporary references, using icons of non-indigenous visual cultures in order to promote awareness of the struggle of indigenous peoples in various media and languages. His work was exhibited at the 22nd Sydney Biennial, at the Centro Cultural São Paulo (CCSP), at Itaú Cultural, Centro Cultural Banco do Brasil (CCBB), at the Arts Center of the Universidade Federal Fluminense (UFF), as well as in several other institutions. He was also one of the guest artists at Amazonian Poetics, a workshop at Brazil LAB / Princeton University and the National Museum / UFRJ held in 2019. In that same year, he was the winner of one of the most important awards in the field of visual arts in Brazil, the PIPA Online Award. In 2020, he exhibited works at the CURA (Circuito Urbano de Arte) festival, in Belo Horizonte, and at the Pinacoteca de São Paulo, where some of his works remain as part of the collection.

Working with the project Cultures of Anti-Racism in Latin America, Denilson has held online conversations, available on the project’s YouTube channel, and participated in the recording of the short documentary Terra fertil: Véxoa and contemporary indigenous art at the Pinacoteca de São Paulo.

For more information about this artist, see https://www.behance.net/denilsonbaniwa 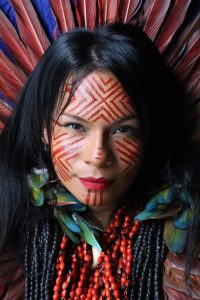 Daiara Hori Figueroa Sampaio, traditionally named Duhigô, belongs to the Eremiri Huusiro Parameri clan of the Yé’pá Mahsã people, better known as Tukano. Born in São Paulo, the artist, activist, educator and communicator bases her artistic work on research into the history, culture and spirituality of her people. She has a degree in visual arts from the University of Brasília (UnB) and a master’s degree in Human Rights, specializing in memory and truth of indigenous peoples. Her artistic activities intersect with communications, speaking out in defence of indigenous rights. She is the coordinator of Rádio Yandê, the first indigenous web radio in Brazil. She lives in Brasília, Distrito Federal. In 2020, she was responsible for creating the largest mural made by an indigenous artist in the world. In addition, her works can be seen in the 30th Edition of the Centro Cultural São Paulo Exhibition Program (CCSP) and in the exhibition Véxoa: We know, at the Pinacoteca de São Paulo.

In collaboration with the Cultures of Anti-Racism in Latin America project, Daiara participated in the online conversations “Anti-Racist Art in the UK” and “Latin America and Women indigenous artists: gender issues in production and recognition”, both available on CARLA’s YouTube channel.

For more information about this artist, see https://www.daiaratukano.com/

Naine Terena is a researcher, teacher, artist and curator. She works with multiple artistic languages ​​and media. She holds a PhD in Education from the Pontifical Catholic University of São Paulo (PUC-SP) and a Master’s in Arts from the University of Brasília (UnB). She graduated in Social Communication-Radio from the Federal University of Mato Grosso (UFMT) and developed environmental and cultural projects with Oráculo Comunicação, Educação e Cultura. She held a postdoc at the Laboratory of Information and Communication Studies in Education at the UFMT Education Institute. In 2019, she participated in the Verbier Art Summit in Valais, Switzerland. She dedicated herself to curating the exhibition Véxoa: We know, which opened at the Pinacoteca de São Paulo in October 2020. Naine lives and works in Cuiabá, Mato Grosso, Brazil.

With the project Cultures of Anti-Racism in Latin America, Naine developed a series of online conversations around contemporary indigenous art, spurred by the Véxoa exhibition; she also participated in the making of the short documentary Terra fertil: Véxoa and contemporary indigenous art at the Pinacoteca de São Paulo (available on CARLA’s YouTube channel) and in meetings with the researchers involved.

For more information about this artist, see https://oraculocomunica.wordpress.com/ 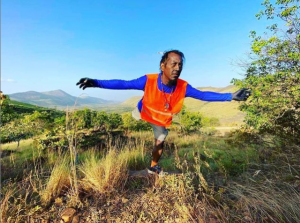 Jaider Esbell is a Macuxi visual artist, curator, writer, educator, activist and cultural producer; he was born in the Indigenous Territory of Raposa Serra do Sol, in Normandy, Roraima. From the time of the First Meeting of All Peoples, in 2013, Esbell assumed an important role in the movement for the consolidation of Contemporary Indigenous Art, acting in a multiple and interdisciplinary way. Bringing together painting, writing, drawing, installation and performance, his work interweaves Indigenous cosmologies, critique of hegemonic culture and socioenvironmental concerns, moving sometimes into the poetic sphere, and sometimes to a more clearly political and activist position. In his first literary work, Terreiro de Makunaima – mitos, lendas e estórias em vivências (Terreiro de Makunaima – myths, legends and stories in lived experience, 2012), Esbell identifies himself as the grandson of Makunaima and defends the taking up of this figure by Indigenous peoples – in Macuxi culture, he is one of the sons of the sun. In 2016, he was the winner of the Pipa Prize for Contemporary Art. In 2020, he created a work-installation called Entidades para CURA Circuito Urbano de Arte, in Belo Horizonte, and his works were exhibited at the 34th Bienal de São Paulo and at the Pinacoteca de São Paulo. He lives in Boa Vista and has maintained the Jaider Esbell Gallery of Contemporary Indigenous Art since 2013. In February 2020, he opened his solo exhibition Presentation: Ruku at the Galeria Millan, in São Paulo.

For the Cultures of Anti-Racism in Latin America project, Jaider made a series of video recordings presenting his work and his gallery (available on CARLA’s YouTube channel), in addition to participating in meetings with the researchers involved.

For more information about this artist, see http://jaideresbell.com.br/ 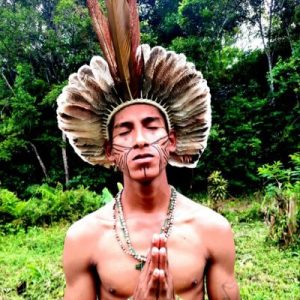 Kunumi MC is a Mbyá-Guarani rapper and writer who lives in Aldeia Krukutu, Parelheiros region, in the south zone of São Paulo. He became known after raising the banner with the words “Demarcação já” (Land demarcation now!) at the opening of the 2014 World Cup. Kunumi is 19 years old and has already released two albums: the debut EP, My Blood is Red (2017), and the album Todo Dia É Dia de Índio (Every day is the Day of the Indian, 2018). In addition to being a rapper, he is also a writer and has two published books – one with his brother, Tupã Mirin, called Contos dos Curumins Guaranis, and another that he wrote alone, Kunumi Guarani. Tupã accompanies Kunumi on stage as DJ Tupan and together they present the strength of RAP Nativo, a new current of Hip Hop, which bases musical creation on native Indigenous views of their own culture – in his case, the Mbyá-Guarani people. As for his musical influences, Kunumi MC points to other native indigenous artists, such as the groups Brô MC’s and Oz Guarani, Djuena Tikuna and Ibã Huni Kuin, in addition to classic names from RAP, such as Racionais MCs and Criolo, with whom he has also recorded the track “Demarcação Já – Terra Ar Mar” (Land demarcation now – Land Air Sea). So far, Kunumi has also released three other singles: “Xondaro Ka´aguy Reguá”, “Moradia de Deus” and “Força de Tupã”.

The artist stars in the documentary My Blood is Red, produced by the British company, Needs Must Film. The documentary, recorded in 2016, took the artist to several Indigenous villages across Brazil to get to know the reality of different peoples up close. One of these meetings was with the leader Sônia Guajajara. During this trip, he witnessed the violence practised by ranchers, loggers, gold miners and politicians against Indigenous people. At the same time, Kunumi met Criolo, one of the most important rappers in the country. Kunumi was also featured on the website of the White Feather Foundation, Julian Lennon’s organisation, which supports Indigenous communities around the world. In addition, on December 10, 2020, the artist represented Brazil – alongside Daniela Mercury – at the event to celebrate Human Rights Day, promoted by the UN.

For Cultures of Anti-Racism in Latin America, Kunumi recorded a statement, available on the project’s YouTube channel. He is also developing a series of online conversations with other Guarani rappers, and producing a single with Kelvin Mbarete (Brô Mc’s) and a video clip. alongside artist Ava Rocha, both commissioned for the project’s online exhibition.

For more information about this artist, see https://bit.ly/MyBloodIsRedTrailer