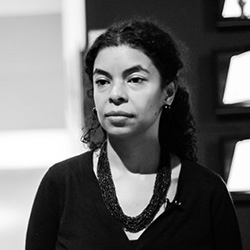 Liliana Angulo Cortés (b. 1974, Bogotá, Colombia) is a visual artist. She graduated from the National University of Bogotá, Colombia, with a specialization in sculpture. She works in various media, including sculpture, photography, video, installation, sound and performance. In her work, among other topics, she explores the body based on issues of racial and political identity, gender, language, power relations and Afro-Colombian culture. Her work addresses the limitations of identity in national narratives and power relations within these discourses. She believes in the artist as a public intellectual and her practice involves various activities – researcher, creator, educator, distributor, administrator and curator. She has participated in exhibitions in Colombia and also internationally in Europe, North and South America and Asia.

Her works can be found in the collections of the Bank of the Republic of Colombia and several private collections. In 2008 she was a guest artist at the National Center for Scientific Research in Paris (Centre National de la Recherche Scientifique, CNRS). The centre’s social science journal Cahiers du Genre, discusses her work in the January 2008 issue dedicated to the topic “Gender, feminism and the value of art” (genre, feminisme et le valeur de l’art) and includes one of her photographs on the cover. She was a guest artist on the “Eight Photographers” programme of the School of the Museum of Fine Arts in Boston. She also presented her work at the University of Pennsylvania’s Center for African Studies and the Latin American and Latino Studies Program. She also gave talks at Kansas State University and Emerson College School of the Arts in Boston. In 2008, she was linked to the “Obra viva” programme developed by the Cultural Area of the Bank of the Republic of Colombia and carried out in the branch in Quibdó, Chocó. In this programme, the artists carried out collective projects with various communities in the country. In the administrative field, she has contributed to designing policies related to artistic practices in social and academic contexts. 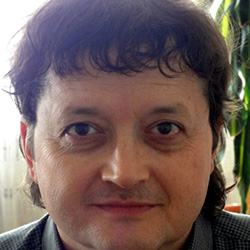 Alejandro Frigerio received his Ph.D. in Anthropology from the University of California in Los Angeles, after completing a BA in Sociology at the Universidad Católica Argentina. He is Principal Investigator at the Argentine National Council of Scientific Research Council (CONICET) at the Centre for Sociology Research at the Catholic University and professor in the Sociology Department of the Catholic University of Argentina and in the Social Anthropology Department in FLACSO (Latin American Faculty of Social Sciences) Buenos Aires.

He was a founding member of the Association of Social Scientists of Religion in the MERCOSUR, its president between 1999-2000 and the editor of Estudios de la Religión for a decade (1996-2006). He has edited volumes on new religious movements and social sciences in the Southern Cone. He is the author of Cultura negra en el Cono Sur: Representaciones en conflicto (EDUCA, 2000) which is an early intervention on discussions about race in the region. He co-authored (with Carlos Hasenbalg) the book Imigrantes Brasileiros na Argentina, published by IUPERJ in Rio de Janeiro; he also edited, with Gustavo Lins Ribeiro, the book Argentinos e Brasileiros: Encontros, Imagens e Estereótipos (Vozes, Brasil, 2002). In Argentina, he was amongst the first to draw attention to racial categorizations in everyday life and to analyze the vernacular category negro as part of the racial matrix that structures Argentina society along with class, politics and ethnicity. 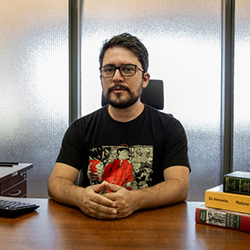