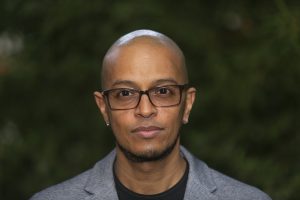 The director of the Sankofa Contemporary Afro-Colombian Dance Corporation is the dancer and choreographer Rafael Palacios, who was born in 1969 in Copacabana, Medellín, Colombia. After undertaking training in African dance at the hands of the teachers Germaine Acoyne and Irene Tassembedo in Paris and influenced by the Mudra School, he undertook a journey through contemporary African and Afro dances that allowed him to visit 18 countries in Central and West Africa such as Burkina Faso, Kenya, Congo, Cameroon, Angola, Eritrea, among others, all influenced by the Mudra School. Upon his return to Colombia, he founded Sankofa, in 1997, which he directs to this day. In 2007, Palacios developed a project called “Steps on Earth; dance, tradition and contemporaneity”, linked to Arts Directorate of the Ministry of Culture, which allowed him to visit several communities in the Colombian Pacific and support training processes around traditional and contemporary Afro dance. In 2008, he obtained the National Dance Award granted by the Ministry of Culture of Colombia and was National Dance Councillor during the period 2009-2011. In that same year, he obtained the Scholarship for the Conservation of Tradition financed by the United States Embassy. He has presented his works in different countries such as Jamaica, Spain, China, the United States, France, Canada, Brazil, Peru, Switzerland, Argentina and Panama. During 2019, together with Sankofa, he had a season of performances in the United States that included the iconic Joyce Theater in New York. 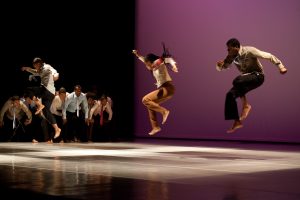 Sankofa develops a series of educational projects for training in contemporary Afro dance, as well as traditional Afro-Colombian rhythms and urban genres. Its objective is to strengthen self-referential processes among the Afro communities of the city of Medellín, emphasizing the collective memory and the knowledge of Afro-Colombian identities and resistance, as part of the Afro diaspora in the Americas. Rafael Palacios has a degree in Dance Education from the University of Antioquia; a Master’s in Education and Human Rights from the Universidad Autónoma Latinoamericana; he has a diploma in Afro-Latin American Studies from ICESI University and Harvard University; and a diploma in Epistemologies of the South, from the Latin American Council of Social Sciences, CLACSO.

The collaborations between Sankofa and the CARLA Project include support in the conceptualization of the work Detrás del Sur: Danzas para Manuel, as well as logistical support for the launch of the work Soledades Compartidas en Tiempos de Pandemia, later relaunched under the name of Narrativas Negras, by the Teatro Metropolitano de Medellín within the framework of DanzaMed, 2020. Recently, at the invitation of Sankofa, the CARLA project has supported workshops to develop the Afro Exhibition: Creative Laboratories in the Home, with an emphasis on Afro-contemporary dance, sponsored by the Mayor’s Office of Medellín within the framework of the Red de Danza programme. Further collaborations include the making of a documentary on creative processes around the work Detrás del Sur.

Sankofa’s work can be described as anti-racist because, through the staging of Afro-contemporary dance, it seeks to dismantle stereotypes about black people that prevent appreciation of the plurality of Afro-descendants and the heterogeneity of their social identities. Likewise, Sankofa affirms the value of resistances that are expressed in the form of community knowledge embodied in traditional and urban dances, which make up collective memories and create bonds of reciprocity. Lastly, Sankofa’s work is related to anti-racism as it questions the legacies of coloniality that affect Afro people, disciplining their bodies, setting standards of Eurocentric beauty, and undermining spiritualities.

For more information about this artist, see https://www.youtube.com/watch?v=78m78cxkE3g&t=1288s> 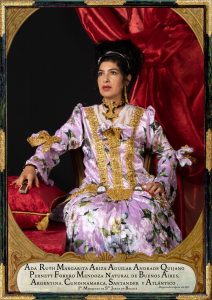 Margarita Ariza Aguilar was born in Buenos Aires, from where she moved to Barranquilla, Colombia when she was very young. Her artistic practice includes performance, video, drawing, painting, public space intervention, making objects and writing, participatory experiences and collaborative actions. In 2011, she started the Blanco Porcelana project that investigates the aspirations of whiteness in the family environment. Based on material she collected about daily beauty practices, verbal expressions, self-care routines, and perceptions of bodies, skin colour, and social status, Ariza revealed the permanence of racism in the shaping of subjectivities hidden in the guise of aspirations to whiteness. The project was censored by the Colombian courts, on charges of violation of family privacy. Then, in 2015, the Constitutional Court ruled in her favour, making it the first case of the protection of the right to free expression in the field of the arts.

Ariza is Dean of the Faculty of Visual and Applied Arts in the Departmental Institute of Fine Arts in Cali, Colombia, and teacher in the Plastic Arts programme. She directs the Aisthesis research group of the same faculty. She has been a professor at the Pontificia Universidad Javeriana and at ICESI University. In addition, she has served as a curator at the Museum of Modern Art and an external advisor to the Museum of Modern Art in Barranquilla. Ariza’s artistic practice includes collaborations and interventions in spaces such as museums, public transport and educational spaces. During the Festival of Art and Decoloniality 2019, at the Colonial Museum of Bogotá, the artist made a photographic intervention using the work La Marquesa de San Jorge, by Joaquín Gutiérrez (1775), showing how other mestizo, Afro-descendant and Indigenous bodies could occupy spaces of symbolic power represented by the portrait of the marchioness whose skin was described as “almost made of porcelain.”

The collaborations between Margarita Ariza and the CARLA project have been based on working together in the preparation of academic articles dissemination pieces about Ariza’s work, in particular her work on the figure and portrait of Juan José Nieto Gil, as part of the Black Enough? Project. The work involves the collaboration of 26 visual artists who critically explore the historical invisibilization of the portrait of Colombia’s only Afro president, a promoter of the abolition of slavery in the country during the second half of the republican period. Further collaborations will centre on developing creative processes of performance and reflections around the relationship between racism, whiteness and emotions.

Ariza’s work is related to the themes of the CARLA project in several ways. First, because she approaches racism from the angle of the aspiration for whiteness. She conceives of “white” beyond the colour of the skin, although she does not exclude this element, to show the way in which whiteness is produced and reproduced in everyday practices in private settings such as the family. Second, she is interested in the ways in which whiteness generates effects of invisibilization and un-marking of subalternized identities, forcing them to fit within the ideals of whiteness. In that sense, her work shows how whiteness is a racialized construction of difference. Finally, her work is related to the lines of interest of the CARLA project due to its affective dimension that permits an analysis of the politics of affect through exploring the effects the artworks generate in different audiences.

For more information about this artist, see https://blancoporcelana.wordpress.com/