On Rugby Players, ‘Negros’, and What Is Said and Seen about Racism in Argentina 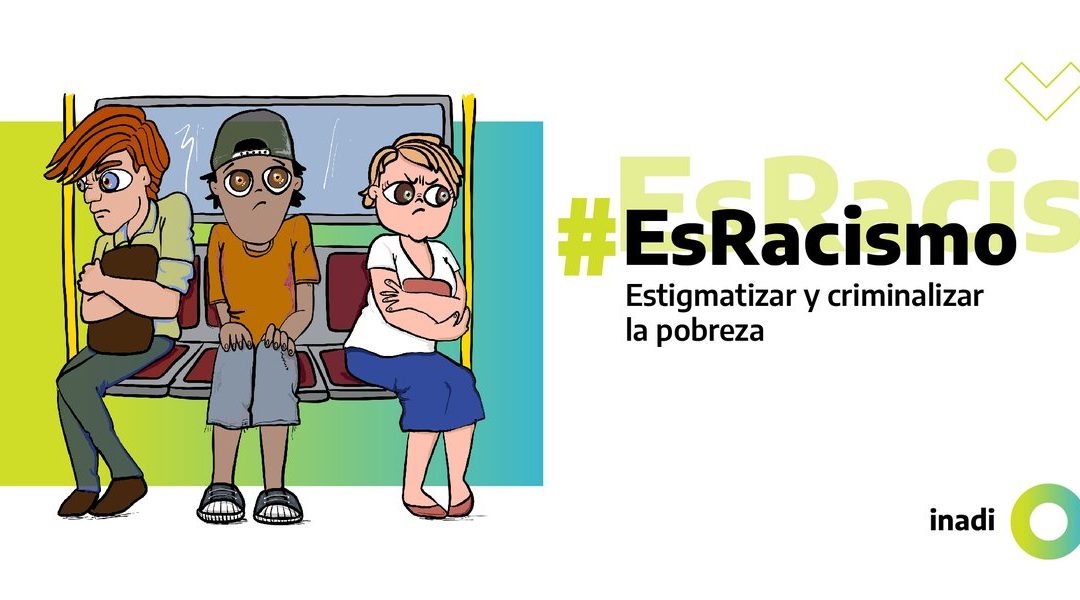 On 18 January 2020, news came out that shocked Argentina: a nineteen-year-old boy called Fernando Báez Sosa had been beaten to death in the small hours of the morning outside a nightclub in a summer resort. The crime immediately triggered an important public debate, motivated primarily by the fact that the perpetrators were a group of young male rugby players. Based on witnesses’ statements, the media reported that, after brutally hitting and kicking Fernando in the body and the head, the rugby players abandoned him on the floor unconscious. He died soon after as he was admitted to a hospital in an ambulance.

Pablo Alabarces affirms that, since the beginning of the twenty-first century, men’s rugby in Argentina has been the subject of nationalist operations by the press and the advertising world. This could be explained partly by the excellent international performance of the national team but, mainly, it is due to rugby’s ability to activate an alternative national narrative to the one associated with football – historically, the sport around which national identity has been articulated in Argentina. Rugby, as Alabarces puts it, offers the possibility of a radically anti-plebeian counterpoint to football (given rugby’s status as a middle- and upper-class sport), while simultaneously ensuring the continuity of a primarily masculine conception of the nation. On several instances, the men’s national rugby team has been portrayed in the press as the repository of Argentinian-ness in its fullest, most positive manifestation: patriotism, sacrifice, teamwork and integrity, and the ability to combine roughness with gentlemanliness and fair play.

Although critical views of rugby culture as a model of citizenship existed before the murder of Báez Sosa, the crime destabilised this narrative and generated an intense discussion about the relations between rugby, sexism and classism. In the media and social networks, multiple voices referred to incidents of violence committed by groups of rugby players (particularly, younger ones) against men from lower socioeconomic backgrounds and women. However, with some exceptions, the crime did not inspire a similar public debate about racism. This, at first, might seem unusual, given that, during the beating, one of the rugby players yelled ‘negro de mierda’ [shitty black] at Fernando, and the photos of the young man that circulated in the media attested to his darker skin. Most news outlets simply interpreted it as a classist insult. Baez Sosa, the son of Paraguayan immigrants who work as caretakers, was called ‘negro’ because he was from a working-class background. As Alejandro Mamani, a member of the antiracist collective Identidad Marrón, put it, the murder made Argentinians ‘talk of patriarchy, about violence in sports, but we were unable to talk about racism despite it being ten white boys against one who was not’.

This silence around racism is not so strange if we consider the persistence, in Argentina, of a widespread understanding of the national body as racially homogeneous and, particularly, as white. This whiteness, allegedly, was the result of the impact of massive European immigration and the extermination of Afro-descendants and indigenous peoples during the time when the modern nation-state was consolidated (roughly between the 1880s and the 1920s). According to this narrative, since most contemporary Argentinians share the same racial background, racial language elliptically expresses oppositions, conflicts and prejudices that are primarily socio-economic and political. Notably, it channels the tensions between the traditionally anti-Peronist middle and upper classes and the archetypically Peronist working class.

In recent years, this idea has been the subject of growing criticism, which affirms the existence of clearly racial structures of domination – although, obviously, intersecting with other social variables. These structures are supported by the historical and systematic invisibility of those sectors that do not conform to the model of a white and Europeanised national identity – i.e. indigenous peoples, Afro-descendants, ‘negros’ (a category that does not necessarily imply Afro-descendant background and instead functions as a signifier of an undefined and mainly urban non-whiteness) and ‘morochos’ (a term analogous to ‘negro’). Unlike the terms indigenous people and Afro-descendants, ‘negro’ and ‘morocho’ are informal categories, which are never used in institutional or media discourses.

The idea of invisibility is common in activist and intellectual rhetorics that denounce structural racism. It is undeniable that, in Argentina, non-white subjectivities have historically been excluded from official and public representations of the nation by those self-identified as white. This exclusion works as a symbolic complement to a ‘material’ form of racism, manifested in marginalisation, poverty and violence. People with Amerindian features in urban contexts are often perceived as immigrants from other Latin American countries, such as Bolivia, Paraguay and Peru. Furthermore, those who self-identify as indigenous tend to inhabit geographically and politically peripheral regions (their ancestral territories in Patagonia and the north) and are hardly ‘visible’ at the national level. In the case of Afro-descendants, although they mostly live in the larger cities, they constitute a minority that, as Alejandro Frigerio points out, is also generally assumed to come from abroad (Brazil, Cape Verde, Haiti, Senegal). A typical example of this is the Afro-Argentinian activist María Magdalena Lamadrid, who was detained by the national immigration authorities as she was trying to board a flight to go abroad. Border control police officers suspected that her Argentinian passport was fake, based on the logic that ‘there are no blacks in Argentina’. Many Afro-Argentinians have also been “whitened” by decades of interracial unions.

Although the notion of invisibilisation is conceptually and politically useful, it is not without limitations, particularly when it comes to the ‘negros’ and ‘morochos’ who constitute, in Argentina, what is commonly defined as ‘the people’ or the ‘popular sectors’ (and which includes poor migrants). In this case, invisibilisation by itself does not provide a full explanation of how racism works, because physical appearance is continuously there as a reminder of a social difference that is simultaneously visible yet denied. Thus, the idea of a homogeneously white and Europeanised society, which is advanced as an irrefutable reality by the dominant sectors, is continuously contradicted by a demographic majority that does not conform to this conception of the national body. Since racial tensions are masked by the dynamics of class, the elites can deny the existence of structural racism and, at the same time, perpetuate forms of racist domination. This comic strip by cartoonist Otto Zaiser, which refers to the antiracist protests in the United States following the murder of George Floyd, perfectly captures how Argentina’s white middle- and upper-class sectors present racism as a problem of other countries (a problem that deserves to be repudiated) yet reinforce (and/or silence) the existence of racism against the ‘negros populares’ in their country. In the image, a white Argentinian man wearing a Chicago Bulls jersey with Michael Jordan’s number solemnly expresses his solidarity with the Black Lives Matter movement, only to react with terror as a dark-skinned street vendor wearing a hat and a Boca Juniors jersey (a typical ‘negro popular’) approaches him to see if he wants to buy some socks. 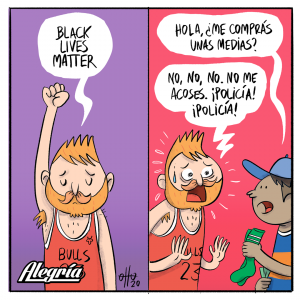 I want to return now to the case of Fernando Báez Sosa to suggest a hypothesis: the rugby players did not call him ‘negro’ because he was working-class, but inferred that he was working-class because he was dark-skinned. They read his class from his physical appearance, and not the other way around. With this I want to point out not just that race in Argentina works as a social variable in itself and not as something subsumed by class; I also argue that, contrary to what is sometimes proposed, race is frequently very ‘visible’. In that sense, it is productive to problematise structural racism against ‘negros populares’ not only in terms of what is visibilised and invisibilised, but also in terms of what is said and what is silenced. Another example taken from rugby illustrates this point further. In November 2016, the media reported that a teenager named Tomás, from San Isidro (one of the wealthiest neighbourhoods in Argentina), had encouraged Javier, a boy arrested for breaking into his house, to join a rugby team made up of prison inmates that promotes rehabilitation and social reintegration through sport. Presented as an example of citizenship, news outlets reproduced the photograph of the two boys embracing each other. 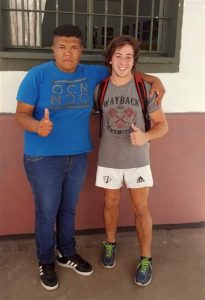 The image illustrates the mechanisms of racism in Argentina, in the sense that the teenagers’ physical difference in skin and hair colour, facial features and other traits that are often seen as racial signifiers is clearly visible and yet wholly omitted in the narrative of the news media. This omission is not due to political correctness or post-racial rhetoric, but rather to the fact that, in public discourse, ethno-racial difference is never presented as defining social hierarchy. Javier is not someone from a different race to Tomás. Race is codified in the language of class or space, or both, as exemplified by terms like ‘villero’ and ‘negro villero’ (which reference the slums, or ‘villas’, massively inhabited by non-white people), or ‘pibe chorro’ (literally ‘thieving lad’, used for young criminals from the ‘villa’, often dark-skinned). As in the case of the slur ‘negro de mierda’, shouted at Báez Sosa, it is only in everyday and informal interaction that race manifests itself, and only as an insult (that is, as racism). However, this racism is quickly downplayed in public discourse, where it is presented as class-based diatribes or is outright ignored (which, again, points to the question of what is said, not what is visibilised). Probably, Javier does not identify himself as belonging to a different race from Tomás and he too expresses racial difference elliptically. In the case of the popular sectors, race only emerges in the discourse of the others (the whites), in everyday interaction (never in official and public discourse), and only as racist manifestation.

Addressing racism not only against indigenous peoples and Afro-descendants but also against those who do not identify themselves – nor are identified – with defined ethno-racial identities and groups is one of the challenges facing antiracist action and research in Argentina. In recent years, critical voices that call racism by its name have multiplied in institutional, activist, intellectual and artistic fields. As in many other countries, the George Floyd protests in the United States have contributed to a growing debate about the existence of structural racism in Argentina. In this context, it is essential to redouble efforts to publicly discuss and denounce racist dynamics that affect not only historical ethno-racial minorities but also the popular sectors. An example of this is the latest antiracist campaign by the National Institute against Discrimination, Xenophobia and Racism (INADI). The efforts of activist groups like Identidad Marrón or the public interventions by academics like Ezequiel Adamovsky or Alejandro Grimson also point towards this direction. In the cultural sphere, phenomena such as cumbia villera, the films of César González, or the work of writers such as Cucurto or Cristian Alarcón have exposed how the urban poor systematically suffer not only class-based but also racist violence. This is an area to which we want to contribute through the project Cultures of Anti-racism in Latin America.